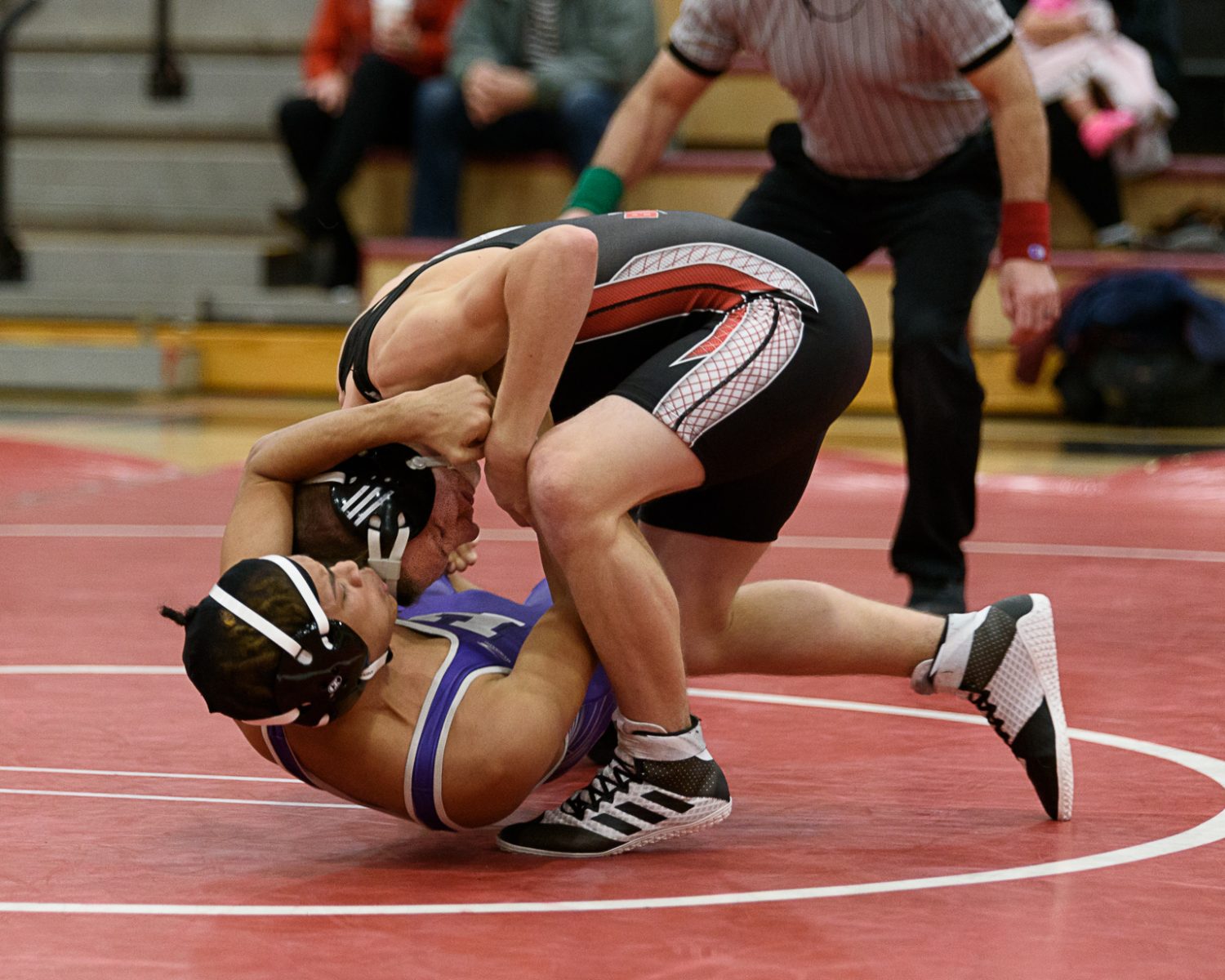 DANVERS – For the first time in recent memory, a Westfield wrestler is headed to all-states.
Westfield’s 145-pound wrestler, Vitaliy Borodin went 3-2 at the state championships at St. John’s Prep in Danvers to qualify for the state tournament.
Borodin started off with a match against the Central division’s No. 2 seed, Needam’s Daniel Walsh. After an early takedown by Walsh, Borodin got a reversal and then went to work with a number of tilts usually reserved for college wrestling. He finished with some dominant leg maneuvers and finished his opponent in 4:49 by technical fall 17-2.
Borodin fell in the following match to overall No. 2 seed, Mansfield’s Will Stratton. With his tournament life on the line, Westfield’s 145-pounder came up big though posting a major decision over Franklin’s Thomas Zogby. Then, he lost to Brockton’s Wilkes Pedro. 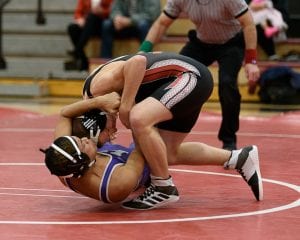 Westfield’s Vitaly Borodin pins Holyoke’s Milario Peralta during a 2018-19 regular season meet. Borodin made an impressive showing at the state championships this past weekend. (File Photo by Marc St. Onge)

But in a match that he desperately needed, Borodin saved the best for last.
Against the South’s third-seeded Calvin Paiva, Paiva took down Borodin early, but Borodin quickly reversed him and overwhelmed him, putting his opponent to his back and keeping him down for the pin in 49 seconds.
“When Vitaliy wrestles his match, he is very difficult to beat,” Westfield wrestling head coach Chris Malinowski said. “He can beat anyone. He truly has the heart of a champion.
It is a tournament that is extremely difficult to make it to the second day. Still, another Westfield wrestler accomplished that feat – 126-pound Ed Borodin.
Ed Borodin lost his first match to third-seeded Nore Mendez (Weymouth).
In his second match, trailing 6-0 with his tournament life on the line, Ed Borodin spotted a weakness in his opponent, Stephan Donovan (West Academy).
Halfway through the second period, the conditioning distance in the two wrestlers was apparent, Westfield’s head coach said after the match.
It was all Borodin from there as the Westfield wrestler employed a reversal in the second, a takedown and back points in the third to tie the match at 6-all.
In sudden victory, there were no points scored. In the second period of the second overtime, Borodin managed to escape from his opponent and complete a thrilling 7-6 double overtime victory. ?”I couldn’t be more proud of all of my wrestlers and how hard they work,” coach Malinowski said. “I am truly proud to be their coach.”
Malinowski said coaches Mike Malinowski, Dave Osieki, Alvin Brown, and Isaak Santos have provided a huge boost to the program with their expertise.
“We have had a lot of help throughout the year,” coach Chris Malinowski said. “(They) really make the difference.” – Chris Malinowski contributed to this report

SILVER-AND-GOLD STATE SWIM: It was a gold and silver-studded affair for Westfield High School’s Tommy Russell and the Bombers boys swim team at the state championships at Boston University.
Russell won the 100 backstroke, breaking his own school record with a time of 51.56, and finishing second in the 50 freestyle, losing by just 4/1ooths of a second, also a record.
Russell also combined with Patrick Lurgio, Jack Beaulieu, and Matt Morash to take home third place (1:39.75) in the 200 medley relay. The relay team missed setting a school record by 2/10ths of a second.
Morash, Lurgio, Cole Viamari, and Russell placed eighth in the 400 free relay (3:21.54).
Westfield’s Kevin Hayes (diving) placed 19th (2:28.05), the 200 free relay team (Beaulieu, Morash, Lurgio, Viamari) outperformed its seed (19th) by finishing ninth in 1:32.78, and Morash was 23rd in the 100 free (51.07).
Westfield placed sixth overall with 109 points, the highest Western Massachusetts finisher. Minnechaug finished with 108.
“For a team of basically two and three individual qualifiers, and five guys total swimming relays to come in sixth is pretty awesome result for the team,” Westfield swimming head coach Tom Lewis said. “We had an interesting year – both on the boys’ side and the girls’ side – little bit of a roller coaster year. Sometimes we were very, very up. Sometimes we seemed to be struggling. Both teams ended in splendid fashion this weekend.” – Tom Lewis contributed to this report

ANOTHER PATH CLEARED FOR LAFOREST: Westfield High School senior Brenden Laforest won the Division 2 indoor track state championship in the 600 meter race with a time of 1:22.04 at the Reggie Lewis Center in Boston.
Catie Bean placed sixth among the girls in the 300 meter dash (42.69).