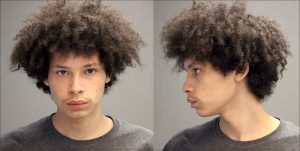 WESTFIELD – A 19-year-old man and a juvenile accomplice have been arrested after allegedly stealing a pistol from the cab of a neighbor’s Freightliner truck.
A Sackett Road resident reported to police Monday, July 20, that his unlocked truck had been entered overnight and property including a Smith and Wesson pistol had been stolen.
Detectives Scott Schuster and Jason Williams were assigned to investigate and Schuster reports, in a court document, that the pistol was stolen along with a box of ammunition and a GPS device.
Det. Lt. Stephan Dickinson explained later that the trucker said that the pistol and ammunition had been in a locked container inside the cab of the tractor-trailer unit.
Schuster reports that the victim had a security video system at his property and a review of that video showed two persons “who broke into his vehicle multiple times on 7:20/2020 at approximately 3:13 a.m.” His report states “the victim is familiar with the defendant and the co-defendant through previous incidents and having observed them walking in front of his house frequently.”
When the two detectives processed the truck they lifted several fingerprints including one which was found to be from the index finger of David Mael Benitez, 19, of 304 Sackett Road, Westfield.
A warrant issued by Westfield District Court was executed by Schuster and Dickinson (with the assistance of officers Mark Carboneau, Sean Smith and Harry Sienkiewicz) on Wednesday.
A search of the home of the two suspects did not reveal the stolen property.
Dickinson said that Benitez admitted his culpability and showed the officers a hiding spot in the woods nearby where the pistol, ammunition, GPS and other miscellaneous unreported items were recovered.
However, Dickinson said that the juvenile suspect was “street smart” and “thought it was funny”, perhaps secure in the knowledge that as a juvenile the repercussions of his actions were limited.
Benitez was arrested and subsequently arraigned in Westfield District Court on charges of larceny of a fireman and breaking and entering a vehicle in the nighttime with intent to commit a felony. He was released on $2,500 personal surety pending an Oct.13 hearing.
The juvenile suspect was also arrested. His case will be heard in Holyoke Juvenile Court which does not release information about juvenile cases.