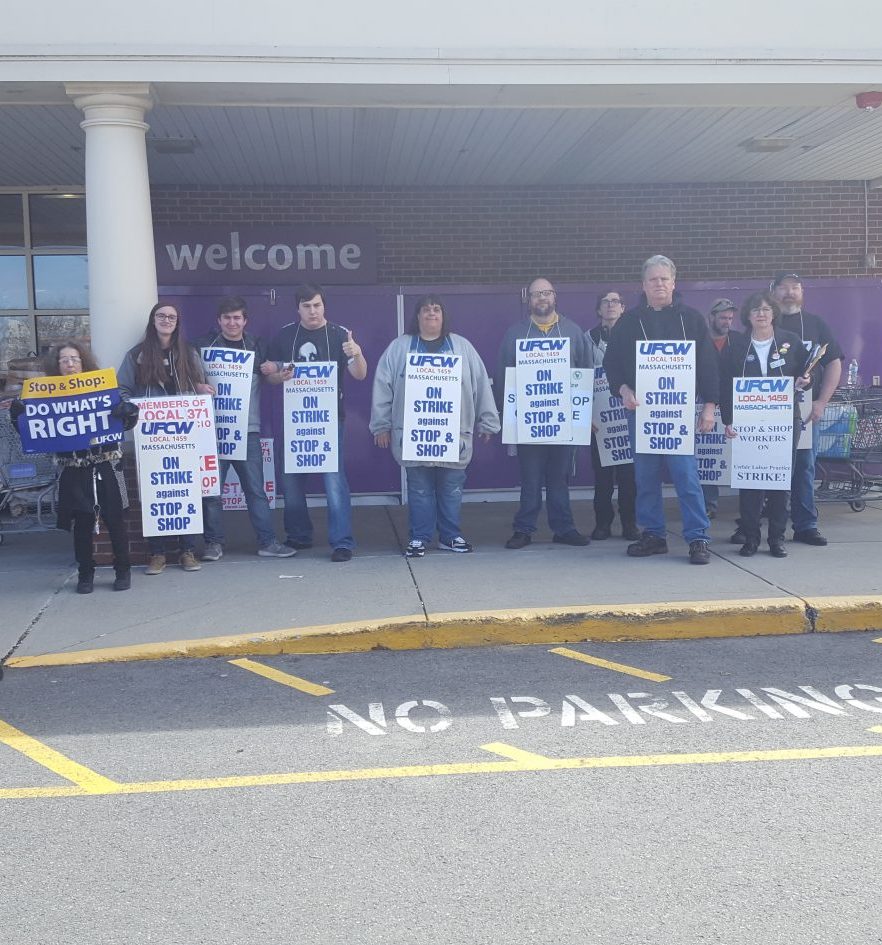 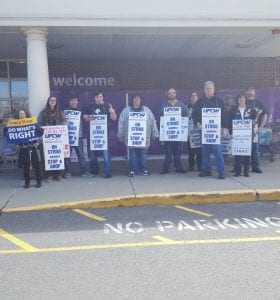 WESTFIELD- Stop and Shop grocery stores across New England are closed, including the location in Westfield, as the employees have gone on strike due to a contract dispute beginning on Thursday.

Employees walked out of the store at 1 p.m., some were even in the middle of ringing up customers. Joe Lesko, a representative of Local Union 371, said that the strike is a result of unfair labor practices on the part of the company.

“We just want a fair contract,” said Lesko. He added that the company has been seeking to take away pensions, get rid of time-and-a-half pay on Sundays, and reduce vacations, among other benefit losses.

“This is not something we wanted to do,” said Marsha Bassett of Local Union 1459, “They left us no choice.”

The strike affects over 31,000 employees in Stop and Shop’s across New England. The union representatives estimated that 150 employees in the Westfield location are being affected.

The employees will stand outside the store with picket signs during their normally scheduled shifts. People who arrived at the store expecting to be able to buy food were turned away. Some quickly showed their support and signed the petition, while others voiced their displeasure and in some cases hurled insults. When people did give their support, the employees often said that, “They just want to keep the benefits they already have.”

“Given that negotiations with assistance of the federal mediators are continuing, we are disappointed that the UFCW (United Food and Commercial Workers) chose to order a work stoppage in an attempt to disrupt service at our stores,” said a statement by Stop and Shop’s corporate office, “Stop & Shop has contingency plans in place to minimize disruption.”

Jennifer Borgan, the Director External Communications & Community Relations at Stop & Shop, said that the company is working on getting temporary workers to keep the stores open during the strike. She said that Stop and Shop has been negotiating with five unions since January. Those five unions are United Food & Commercial Workers (UFCW) Locals 328, 371, 919, 1445, and 1459.

“The negotiations are ongoing with the assistance of a federal mediator,” said Borgan, “We believe we have presented the unions with a fair offer. We are ready to go back to the bargaining table.”

Borgan added that the offer given by Stop and Shop to the unions was as follows: “Across-the-board pay increases for all associates, continued “Gold Level” health care benefits for eligible associates – at a fraction of what employees at other retail companies pay and with no changes to already unusually low deductibles, and increased company contributions to the UFCW’s defined benefit pension fund for current full- and vested part-time associates – a rare benefit in the New England food retail industry.”

The rest of the statement continued, “Additionally, this morning the company made several suggestions to the federal mediators to encourage further bargaining. The mediators gave those proposals to the Locals late in the morning. The Locals provided no counter proposals to the mediators and simply stated they were proceeding with their plans.

In contrast to the company’s proposal which is better than most recent UFCW contract settlements and responsive to heavy non-union competition, the unions proposed a contract that would increase the company’s costs. This would make our company less competitive in the mostly non-union New England food retail marketplace.

Stop & Shop remains ready and available to meet with the union locals at any time. We are committed to good faith bargaining and hope to reach new contracts as quickly as possible that both recognize and reward the great work of our associates and enable Stop & Shop to compete effectively in the rapidly changing New England grocery market.”

In a joint statement, the five unions said that the company is making drastic cuts to their benefits.

“UFCW Locals representing 31,000 Stop & Shop workers in New England have been negotiating a new contract with Stop & Shop representatives since January 14th. The company’s latest proposal includes the following drastic cuts: 1. Requires the average full-time employee to pay an additional $893 and the average part-time employee with employee-only coverage to pay an additional $603 in weekly health care premiums over three years. 2. Reduces the monthly pension benefit for many newly hired full-time employees by 32 percent. 3. Many part-time employees would receive an average general wage increase of less than two percent.

Stop & Shop’s parent company, Ahold Delhaize, saw over $2 billion in profits last year and got a U.S. tax cut of $225 million in 2017. The company is claiming the proposed cuts are necessary, but is unlawfully refusing to provide financial information to verify that claim.

While Stop & Shop continues to propose drastically cutting worker benefits, Ahold shareholders voted on April 10 to give themselves an 11.1 percent raise in dividends over the last year. The expected payout will be on April 25 for around $880 million,” said the statement.

Jon McEwan was having his items checked out when the employee walk-out began. McEwan was a part of the teamsters union for 32 years. Although he knows how important strikes are to unions and their bargaining, he felt like it could have been planned better.

“I was right in the middle of it. But I left my products there [on the belt],” said McEwan, “They could have legally checked people out with the managers on staff.”

McEwan added that many people tried to use the self-checkout, but the line quickly got too long. Many people had to abandon perishable foods at the checkouts.

“I think they could have planned it better. They should have done it in the morning,” said McEwan, “They wanted to catch the company. They did, but they also hit the customer base though, which they don’t want to do.”

McEwan said that the employees and union representatives should sit back down and renegotiate again. He even suggested the employees end the strike and go back to work while those negotiations continue.

None of the involved parties were able to give a timetable for how long the strike would continue or when the grocery stores would be able to reopen.