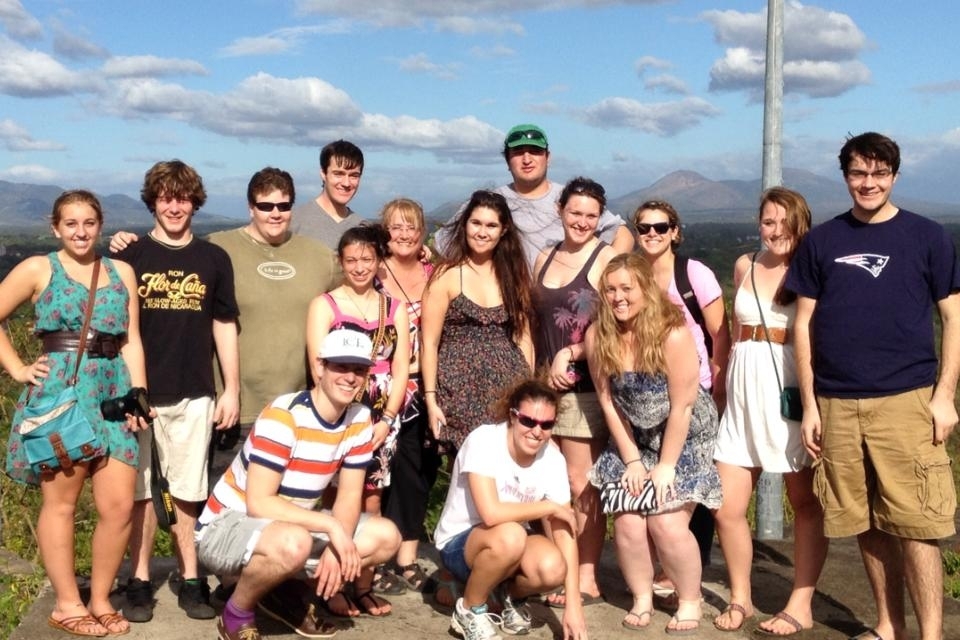 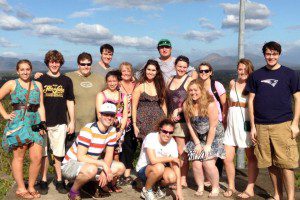 WESTFIELD – One January afternoon in Granada, Nicaragua, a group of 13 Westfield State University students took the local village children to the zoo. Before the trip to the zoo, the students packed each child a lunch for the day. What happened next could only be described as life changing.
“The children took their lunches, ate half of the sandwich, and wrapped up the remaining half to feed the rest of their families,” said Kathi Bradford, director of Alumni Relations and one of the Global Service Class instructors for the trip. “It was an eye-opening and humbling experience for our students to realize how good you have it. That is a truly remarkable gift.”
This is the third year Westfield State students traveled to Nicaragua to work alongside La Esperanza Granada, a non-profit organization that focuses on supporting children’s education and rebuilding the neighborhoods around the city of Granada.
In January 2012, students helped build a technology classroom. This year, the students built a community center that will serve as a child care center. According to Bradford, children are often left alone while their parents go off to work or to find work.
“It is not uncommon for a six year old to be left to take care of a two year old,” she said.
Bradford said that building this child care center was vital to the community because it will introduce the beginning of education for these children.
Westfield State students worked in the Central American country from January 2 to January 16, 2013. In those two weeks, students completed various volunteer work hours. In addition to building the community center, they taught 4th graders for an hour and a half each day.
“We would teach the children things like how to tell time, the days of the week, and the months of the year,” said Craig Levine, one of the students that traveled with Bradford to Nicaragua. “I value a lot more now. I appreciate the little things better.”
Chelsea Reynolds said that it was her first time travelling abroad and although she barely spoke Spanish, she felt that the language barrier did not “Even though I have little to no experience talking in Spanish, it was incredible to me that we could still communication through facial and body expression,” she said.
The trip was separated into two different kinds of days. The “workdays” and the “culture days” as Bradford called it. On culture days, usually on the weekends, they would travel. The group did activities such as zip lining, exploring the city of Leon, visiting a Nicaraguan beach that the natives go to, and getting box seats to a national baseball game.
Bradford said that this is an experience that changes students’ outlook on life. She also said that every person that has gone wishes that they could return,
“The world is smaller than you think,” she said. “A class like this helps you figure out why it’s important to care about more than the material items that you have.”
This was Deryn Copeland’s second time going on the service learning trip to Nicaragua. This time around, Copeland was rewarded with the responsibility of being a student leader.
“As student leaders we faced challenges such as walking the fine line between being friends and being leaders,” she said. “It may not be easy, but it taught me things about myself and about working with others that I couldn’t have learned anywhere else.”
Copeland is now considering a career in the service industry because of the two service projects she did in Nicaragua.
“It made me decide that the only career path that would make me happy would be the one that includes volunteer work, travel, and of course service,” she said.
Education is one of the best ways to make an impact in someone’s life according to Bradford. Over the course of three years, students have raised over $15,000 for La Esperanza Granada. Bradford said she hopes to raise more when she takes another group of students in January 2014.
“I see growth in my students from January 2 to January 16. It changes their entire outlook,” she said.
Copeland agreed that the two Nicaraguan trips helped shape her future.
“As someone who came to college feeling like I had no intense interest or passions, I felt like I couldn’t find anywhere to fit in. Nicaragua helped me realize who I am, and who I want to be,” she said.
Although Reynolds only attended the Nicaragua trip once, she felt that once was enough to change her outlook on life.
“Once I signed up, I thought ‘I can’t wait to make a difference in the kids’ lives,” she said. “But, I realized that they also taught me as much as I taught them.”
Although the course costs around $2,100 dollars plus personal spending money, it is far less expensive than studying abroad for a whole semester.
“It’s inexpensive compared to other courses,” said Bradford. “There’s a tangible result and, I promise, it will change your life.”