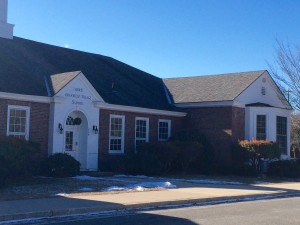 The Granville Village School will likely be the subject of a study that could result in a recommendation to close the school or use it for another purpose, or it could be found to be an asset as it is. (Photo by Hope E. Tremblay)

SOUTHWICK – The Southwick-Tolland-Granville Regional School Committee is considering starting a study that could potentially result in a recommendation to close Granville Village School.
Committee member George LeBlanc, of Southwick, brought up the topic this week and said the study would take a while to put in place and the funds should be placed in the upcoming budget.
The regional agreement between the towns has a provision for such a study and it was a public part of the agreement.
“I think we need to look at the overall picture,” said LeBlanc.
The committee voted last year to bring grades seven and eight from the Granville School to the Southwick campus.
Granville representative Pamela Petschke said the district should do more to keep the school open and suggested encouraging families to choose to send elementary age children to Granville from Southwick and Tolland.
Committee member Theodore Locke, from Tolland, said Tolland residents won’t go to the Granville school.
“I’e had very strong messages that nobody wants to send their kids to Granville,” said Locke.
Petschke asked why not.
“It all goes back 14 years ago when Tolland got kicked out of Granville Village School,” he said.
Committee Chairman James Vincent said Southwick town officials want the study done.
Selectmen have stated they want to know what it costs to keep the Granville school open.
“Maybe the study will come up with an idea (to keep it open),” said Vincent.
“I think there are a lot of ideas, and we don’t need to hire someone to do a study,” Petschke said.
Committee member Jean McGivney-Burelle said the study was needed and one of the main issues was enrollment. Granville Village School enrollment has declined and there are just eight students in first grade. McGivney-Burelle said that is a concern for several reasons.
“When you have eight students in a grade in one school and 20 in another, having a ratio of 20:1 and 8:1 is a very different learning environment,” she said.
Committee member Maria Seddon said she knew of one family who chose to go to Granville Village School from Southwick this year, but parents rarely opt to send their children there.
Petschke suggested students living on the west side of Southwick could attend the Granville school.
Vincent said “there’s no way” he would recommend that.
McGivney-Burelle said if she lived in Granville, she would send her seventh or eighth grade student to the Southwick campus “because of all it has to offer.”
Petschke said that choice was made for the residents of Granville.
Petschke said she did believe there should be a study, but she did not like the timing.
“To start the study now at the close of the building project, seems like a slap in the face,” said Petschke. “The timing seems inappropriate.”
LeBlanc said the timing has nothing to do with the end of the Southwick campus renovations and more to do with the budget process.
Superintendent John Barry said his hope is that the study would look at ways to keep the school open.