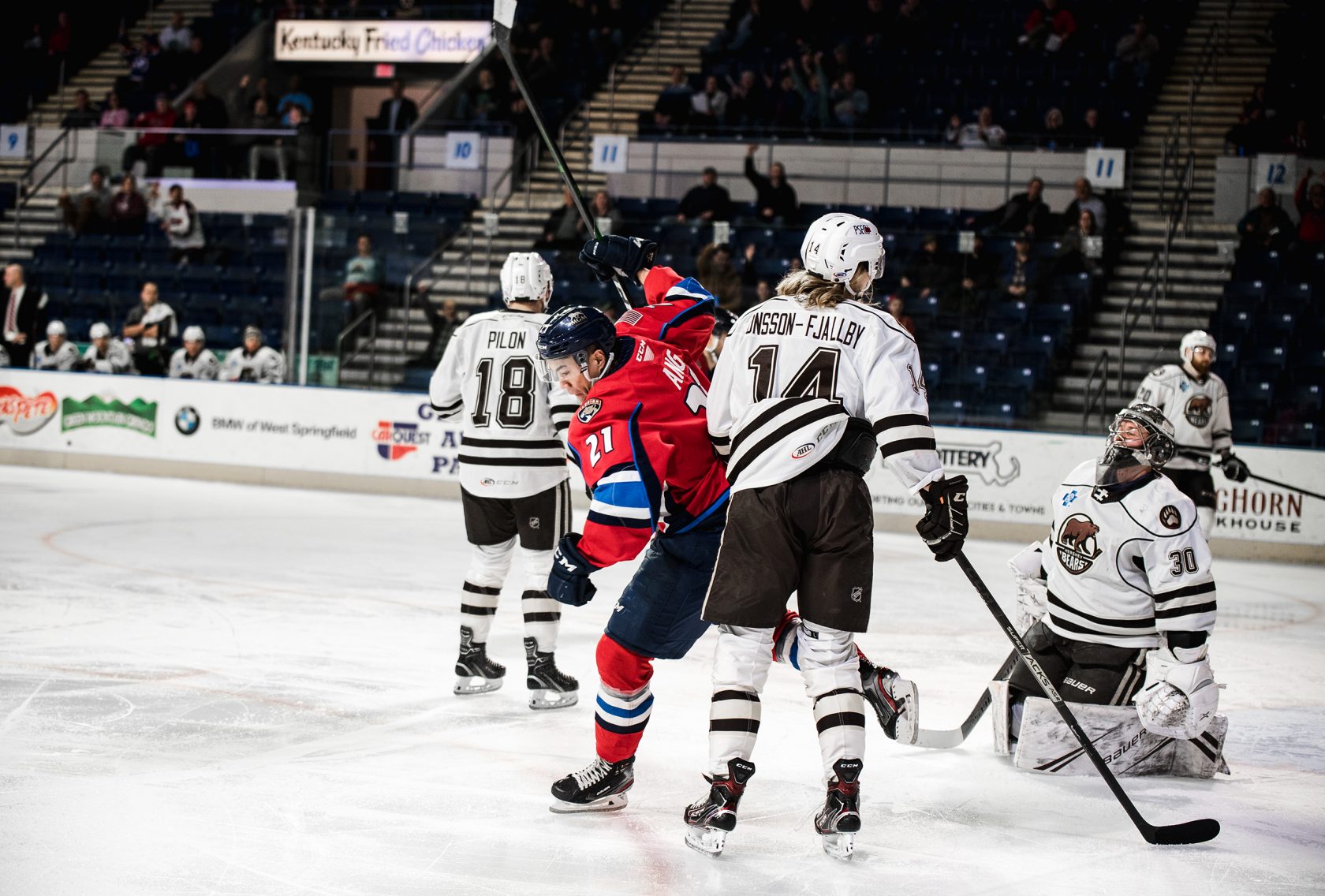 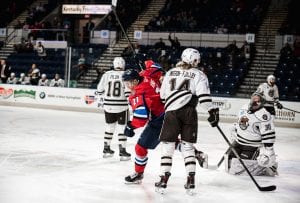 SPRINGFIELD – The Springfield Thunderbirds (24-18-2-0) stormed out of the gates for four unanswered goals in the first two periods, then brought home a 5-2 win over the Hershey Bears (25-14-2-3) on Wednesday night inside the MassMutual Center.
The Thunderbirds began their homestand with one of their most complete efforts in a first period all season, as Jonathan Ang got the T-Birds off and running just 3:25 into the opening frame. Jack Rodewald raced in on a forecheck into the left wing corner, caused a steal by Ang, and the second-year pro cut in front of the crease and outwaited Vitek Vanecek to the near post to tuck the loose puck home.
Springfield registered 14 of the first 18 shots of the night, and the T-Birds also got the first two power plays of the evening in overlapping fashion. Less than 90 seconds after Erik Burgdoerfer went off for holding, Liam O’Brien flipped a puck out of play from the defensive zone, and on the ensuing man advantage, the Thunderbirds struck as Aleksi Saarela snapped a wrist shot under the crossbar past Vanecek to make it a 2-0 game at 13:20 off assists from Owen Tippett and Tommy Cross.
At the other end, Ryan Bednard – making his first home start as an AHL netminder – had little trouble turning aside eight relatively easy shot attempts through the first 20 minutes of action.
Bednard would be much busier in the second, as the Bears got off 11 of the first 14 shots in the middle frame, but the rookie netminder had a response for every single one of them.
The offense was not content with a 2-0 lead, either, and at 15:14, Daniel Audette circled the wagons on the right wing all, skating all the way back to the line and around to the left side before lifting a wrist shot through the traffic and over the glove of Vanecek to make it a 3-0 game.
Ang then followed suit just 1:10 after Audette, dancing down the left wing, cutting sharply to the slot, and picking up a rebound out of Vanecek’s pads to pop home Springfield’s fourth goal of the night to take the 4-0 edge into the third.
Hershey made a strong push in the third to try to get back in the game, beginning with a goal from Alex Alexeyev less than two minutes into the period to make it 4-1. Bednard and the T-Birds defense spent much of the period in the zone, but kept the lead at 4-1 until Philippe Maillet got Hershey within a 4-2 score at 17:17.
However, the Bears had run out of runway in their comeback bid, and Tippett added an empty-net backhander for insurance from the red line with 35 seconds to play. Tippett extended his goal streak to four games with the tally, his 18th of the season.
Bednard improved to 2-0 in his AHL career with a 34-save performance. He now has a 1.50 goals against average and .959 save percentage.
Springfield looks to win its fourth game in a row when they rematch with Hershey on Friday night at 7:05 p.m. inside the MassMutual Center.
For more ticket information or to become a 2019-20 Springfield Thunderbirds ticket package member, or to purchase single game tickets, call (413) 739-GOAL (4625) or visit www.SpringfieldThunderbirds.com. – Courtesy of Springfield Thunderbirds