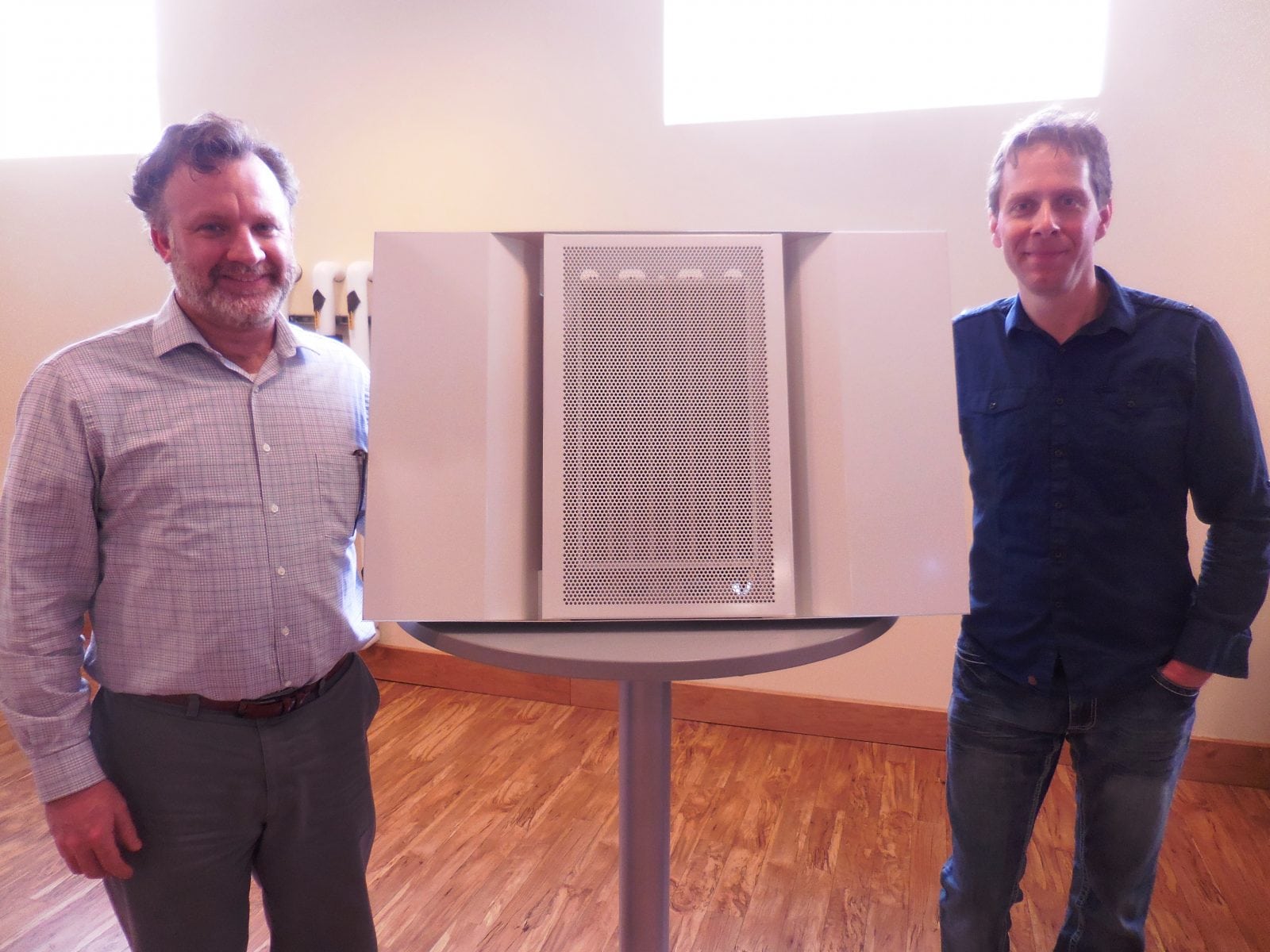 WESTFIELD – The Comcast Technology Center, which is still under construction, will be the tallest building in Philadelphia, and among the most energy efficient buildings in the country. Part of the reason behind its energy efficiency will be the Active Chilled Beam (ACB) system for heating and cooling designed and created right here in Westfield by Dadanco, a division of Mestek, which manufactured all of the units. 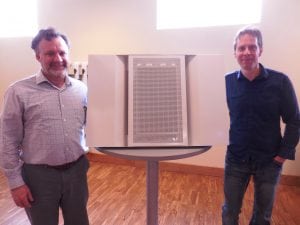 Dadanco’s Regional Sales Manager Giancarlo Tosi and Director of Operations Cassidy Bowman with the Active Chilled Beam (ACB) unit that was installed in the Comcast Technology Center in Philadelphia. (Photo by Amy Porter)

Dadanco’s Regional Sales Manager Giancarlo Tosi and Director of Operations Cassidy Bowman said they shipped out 3500 units of Active Chill Beams for the Comcast tower. Bowman said the building will be the tallest in Pennsylvania, tenth-tallest in the United States and potentially the smartest building in the country. He said Dadanco also created reusable steel crates that “looked like donut trays” to ship the units, saving $80,000 in cardboard. He said they have already reused the crates for other jobs.
ACB technology has been around for fifteen years in this country. “It caught on a lot more in Europe,” Bowman said. Energy efficiency is achieved by transferring a large portion of the heating and cooling loads from the less efficient air distribution system of fans and ductwork, to the more efficient water distribution system of pumps and piping using induction of outside air.
Tosi said the principle of using water to pump around the building as opposed to air is ten times more efficient, using copper pipe vs. 10” by 10” duct work. He said Dadanco patented the induction nozzles to use less air. Fresh air goes into the plenum in the unit and comes out of the nozzles. Dadanco’s star shaped nozzle has more surface area, and comes in contact with more air, Tosi said, inducing more air flow through the unit.
Bowman said they use the physics of air’s natural movement, instead of using electricity. There are no fans in the system and no moving parts, making it “super quiet,” he said, and addressing shortcomings in normal HVAC units relating to floor space, appearance, noise levels, cooling capacities and energy consumption. 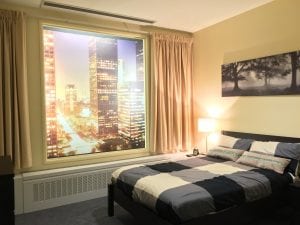 Dadanco’s demonstration hotel room can change the outside temperature behind the doubled-walled glass to show how quickly the room can adjust with ACB technology. (Photo submitted)

Dadanco has been located in the Luxton-Reed Center at 47 Industrial Park Road since 2014, and is one of the few LEED Gold energy efficiency rated buildings in Westfield, and the only LEED Gold commercial interior in all of Western Mass, Bowman said. In order to achieve that rating standard, you have to prove it, by using materials locally sourced within 50 miles; through the separation and disposal of demolition materials; with energy efficient HVAC; bike racks and proximity to public transportation; a solar array (30% of Dadanco’s electricity is generated by the solar array on the roof), no-water urinals and low-flow toilets to demonstrate energy efficiency and green technology.
The building is used as a demonstration for the ACB heating and cooling system. It contains a demonstration classroom, hospital room, hotel room and laboratory, to show how they work in real-life settings.  Their office space is also used to demonstrate energy efficiency, and they also have an in-house laboratory testing chamber which can simulate actual conditions to test projects. 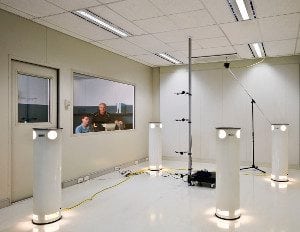 In the hotel room, they have a double wall with a skyline image of LA, which can heat up to simulate an outside temperature of 98 degrees or cool all the way down to 30 degrees; to demonstrate how quickly the room’s temperature will adjust, and how quiet the system is. The unit in the hotel room is an example of a retrofitted unit for older buildings, which Dadanco also makes.
“It’s all about delivering fresh clean air at the temperature you want for less money,” Bowman said. He said the system also uses 75% less air than an all-air system.
The classroom is used for trainings, as well as a demonstration room. Dadanco has sold ACB systems for classrooms in Amherst College, UMass and Western New England University.
“One of the cool things about Dadanco is that we’re small, quick, have great research and development where we can customize and tweak units to be bigger, or a little different. We’re able to do the custom work, something our (bigger) competition won’t touch,” Bowman said. They also work with architects who have a design in mind, and match them up to integrate the units into the look and feel of the design. 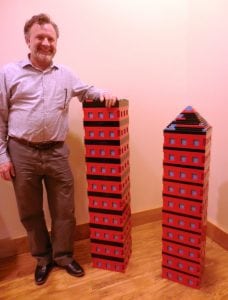 Tosi pointed to two Lego towers that his children constructed as a demonstration. They show the space savings that come along with the smaller duct work between the floors, allowing architects to add more floors in the design.
Another building using Dadanco’s ACB system is the Seagram’s Office Building at 375 Park Avenue in New York, which Bowman said is “literally the most expensive piece of real estate in New York City.” He said the energy efficiency rebates the owners received from the state of New York almost covered the cost of the units, and by turning off the fans, they have saved $1 million a year since the system was installed.
Both Tosi and Bowman expressed appreciation for Mestek, which they called a great, family-owned business.
“Mestek is a really nice place to work,” said Tosi, who lives in Westfield and has worked for Mestek for 21 years. He said his father Charles Tosi was the national sales manager before him. “We have a lot of lifers here.” he said.
“I feel we’re very lucky to work in a place like this. It’s different; we’re always doing something new. It’s important,” Cassidy said.
“We’re really able to stand behind our products,” Tosi said.