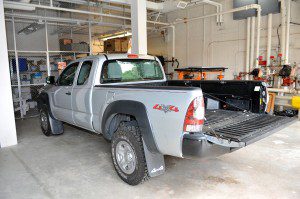 Southwick Police are asking anyone to come forward who might have witnessed this 2009 Toyota Tacoma in or around the Southwick area. Police have arrested two males in connection with a break-in yesterday, when a 14-year-old girl called police after locking herself in a bedroom after the two males entered t  home. (Photo by chief photographer Frederick Gore)

SOUTHWICK – A quick thinking 14-year-old girl helped police apprehend two men breaking into her Hillside Road home Thursday morning.
Police Officer Paul A. Miles said Christopher Vandesteene, 30, of Becket, and Ryan Tortorella, 21, of Washington, were charged with breaking and entering in the daytime, putting a person in fear, trespassing with a motor vehicle, vandalizing property and attempting to commit a crime.
They were arraigned in Westfield District Court Friday and a hearing was set for Aug. 1.
Miles, the arresting officer, was assisted by Sgt. Robert D. Landis and Officer Daniel Ryan.
Police sent a message to Southwick residents via the Connect City system warning residents to be on the lookout for suspicious people because of a rash of recent break-ins, mainly to vehicles.
“This young girl’s mother heard the message and passed it on to her daughter,” said Miles.
Luckily, the girl took the message to heart when she was home alone Thursday and a man she did not know knocked on her door. He was described as a white male wearing a black hoodie and tan pants. The girl did not answer and instead called her mother from her cell phone and told her about the stranger. The mother called the police immediately. The girl also called police and while she was on the phone with the police, two men entered the home through a back window.
Miles said the teenager locked herself in the bedroom and hid behind the bed.
“She was very scared and was on the phone with a dispatcher the whole time,” said Miles. “The dispatcher did a great job of keeping her calm and relaying information.”
Miles was near the neighborhood at the time and quickly arrived at the scene. He speculated that he must have arrived out front as the two men kicked in the girl’s bedroom door.
“When they discovered her, they left through the back where I was waiting and apprehended them with Sgt. Landis,” said Miles.
Landis and Ryan arrived shortly after Miles and assisted with the arrest.
According to a police report by Miles, he saw a grey Toyota pickup truck parked in the back of the house with the engine running when he arrived.
“I continued around the back of the house and observed a window had been broken out,” Miles’ report stated. “A moment later a person wearing a black hoodie and tan pants started to emerge from the window.”
Miles stated that as he had the suspect kneeling on the ground, Ryan arrived.
During an interview with the girl, Miles learned she was watching television in the basement when the doorbell rang and she saw the man and called her mother.
“The minor child said a short time later she observed both suspects at the back window on the deck breaking the window,” Miles reported. “She said that she ran upstairs and locked herself in her room.”
The girl called 911 and hid behind her bed. The two men then broke into her room and they went to pull the covers off her bed when they saw her and saw she was on the phone, then fled.
A search of the home found a pillowcase on the floor that contained costume jewelry, a 1979 gold half-dollar coin and a $2 bill.
Miles said police are asking all residents to be aware of suspicious activity.
“Please watch your neighbor’s homes. Lock your vehicles.  Don’t keep valuables in your cars.  Lock your homes and don’t leave your windows open,” said Miles.
Landis said thieves would take anything of value that is easy to carry.
“They’re looking for anything they can get money for, such as electronics and jewelry,” Landis said. “The price of gold is so high right now, that’s the big thing they’re looking for, so they go to bedrooms first looking for jewelry.”
Southwick Police urge residents to call if anything seems suspicious.
“If anything is out of the ordinary, please call,” said Landis. “We would rather come out and find nothing than find out later that something happened.”
Police also ask anyone who has seen the pick-up truck pictured with this article to please contact police.