WESTFIELD – The Westfield Little League Softball 10-Year-Old All-Stars may truly be “little” leaguers, but they came up with a big time effort to claim a heavy prize.
Westfield opened with a four-run, first-inning outburst and rode the arm of pitcher Marleigh Monroe to the tune of a 5-3 victory to complete a 3-game sweep of Easthampton in the best-of-3 District 2 finals Friday night at Sadie Knox Field. 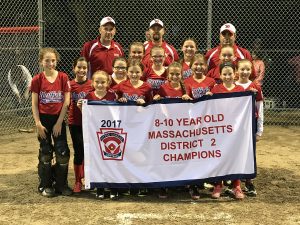 Monroe struck out 18 batters in a complete game four-hitter.
Easthampton took the game’s first lead in the top of the first inning, but Westfield quickly seized control by scoring four runs – all with two outs.
Rachel Bonfitto and Monroe drew consecutive walks. Paige Hutkoski brought them home with a ringing two-run double. Ally LaPanne followed with a run-scoring triple. A wild pitch made it 4-1.
Hutkoski later knocked in another run with another double, this one coming in the third inning.
Easthampton took advantage of a pair of walks in the fifth inning, and ran wild on the base paths to pull within two runs of a tie. They loaded the bases in the sixth, but Monroe managed to strike out the lead-off batter to preserve the championship-clinching victory.
In other Little League softball tournament action, Easthampton defeated Westfield 6-1 in the 11-Year-Old bracket to take a 2-1 series lead.