SPRINGFIELD – A brilliant run is done.
A Westfield High girls soccer team laden with young talent enjoyed a 1-0 lead against the region’s top-seeded West Springfield Terriers in the West Division 1 semifinals Thursday night at Central High School’s Berte Field.
Westfield’s Chandler Pedolzky delivered a nice floater from the corner to Kaela Mochak, who headed the ball in with 3:58 remaining in the first half.
The Bombers (14-6) led 1-0, but West Side scored three unanswered goals in the second half to rally for a 3-1 come-from-behind win. 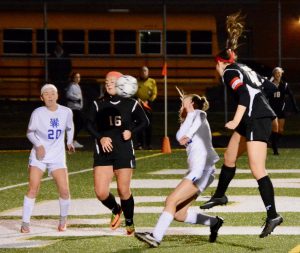 “I’m really, really proud of how well they all competed,” Westfield coach Keith Saltmarsh said. “I feel we will only get better.”
Madison Conway scored the game-tying goal over the Westfield defense off an indirect kick from Wylee Candon in the 49th minute. In the 58th minute, Makenzie Paulo took a kick from Natalie Armstrong and hammered a bullet off the goalie’s hands for the go-ahead score.
West Side added an insurance goal in the 69th minute when Daesia Andrews lofted a high floater from the right side about seven yards into the upper left corner. Conway assisted.

WEST D3 BOYS SOCCER SEMIFINALS
Brown’s shot for final
No. 2 Southwick 1, No. 3 Frontier 0
Nick Brown was the only player to find the back of the net, scoring a second-half goal to send Southwick (14-3-1) into the D3 finals. The Rams advance to take on No. 1 Belchertown (16-2-2) Sunday at Westfield State University at 2:15 p.m.