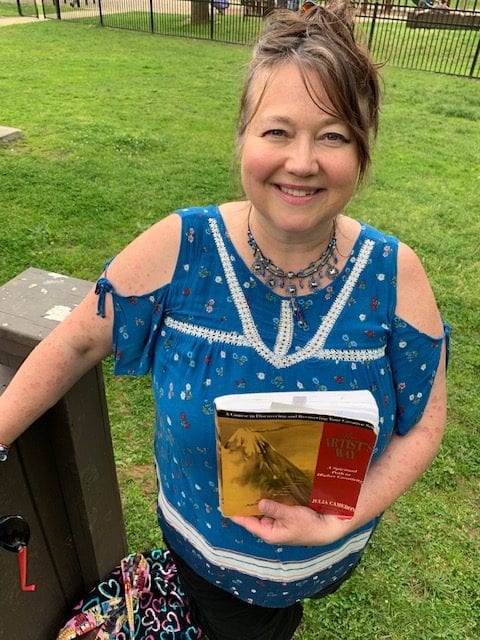 WESTFIELD-Guidance, creativity and spirituality were all part of an “open and wonderful discussion” last Sunday afternoon at Stanley Park as Mimi Caban Ross of Huntington began a monthly group gathering based on the book “The Artist’s Way.” 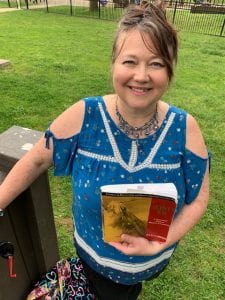 Mimi Caban Ross of Huntington is offering a unique monthly gathering that inspires people to live their lives creatively.

“I like to create an atmosphere where all perspectives can be shared and explored without judgment and without fear of being politically incorrect,” said Caban Ross. “I just want to be able to be myself and share my journey and allow others to do the same; no matter what worldview.”

The Artist’s Way drop-in gathering has grown out of previous 12-week groups that Caban Ross has facilitated throughout the valley. The next gathering is slated for July 21 from 4:30 – 6:30 p.m. and is open to all with a location still to be determined. There is no fee for the drop-in gathering.

Caban Ross explained she began using “The Artist’s Way” book, the ‘Morning Pages,’ and other tools 20 years ago.

“To say it changed my life and work is an understatement,” said Caban Ross, who is a writer, singer/songwriter, pianist and public speaker, worship facilitator, healthy lifestyle mentor and workshop developer and presenter. She is also the owner and operator of NeedARide? Transportation Services for the hill towns and the developer of the Binge Visioning Technique.

“One of my main goals in life is to encourage people to live fearlessly, lovingly and creatively in every way,” said Caban Ross, adding “and to make money while doing it all.”

During Sunday’s gathering, six participants attended and all sat on blankets and took in the energy of the group.

Caban Ross led the group and for those unfamiliar with “The Artist’s Way” by Julia Cameron, she explained the international bestseller has inspired millions to overcome the limiting beliefs and fears that can inhibit the creative process.

Caban Ross notes that “The Artist’s Way” is the seminal book on the subject of creativity.

“Julia Cameron takes readers on an amazing journey to discover the inextricable link between their spiritual and creative selves,” said Caban Ross. “The Artist’s Way is aimed at freeing people’s creativity.”

During the Sunday gathering, some participants were familiar with the book while others had no experience but came with a friend.

“Someone came just looking for ‘something’ in her life,” said Caban Ross.

After brief introductions, Caban Ross discussed the governing principles of honoring each other, not offering advice unless it’s asked for, listening when someone else is sharing, and being OK with quiet if the person sharing is collecting their thoughts and not speaking.

“Several people remarked how that guideline helped them become a better listener in their personal lives too,” said Caban Ross.

“We shared personal and professional victories, discoveries and challenges,” she added. “We also talked about the significance of coming together once a month and welcoming others into the meet ups.”

Caban Ross said that once the participants did another pass around the group, they found there were “many synchronicities” already discovered with people having lived in the same neighborhood or worked in the same school.

At the end of the gathering, Caban Ross invited everyone to stand and hold hands, if they wanted to, which everyone did.

“I invited them to close their eyes and I led them through some life giving and affirming intentions and declarations, with deep thanksgiving for being able to come together again,” said Caban Ross, adding there were “lots of hugs and kisses” and then everyone went out to dinner to continue their newfound friendships.

When Caban Ross returned home that evening, she had an a-ha moment.

“I thought to myself, Julia Cameron, this book, this experience, has created a community where there was none, and friendships that didn’t exist, and creativity, ideas and business ventures newly manifesting,” said Caban Ross. “I thought of the power and synergy of this little group and I thought again, as I always do – what if more people entered into this incredibly affirming and challenging, liberating and joy-filled way of thinking and living?”

For more information on the next gathering, contact Caban Ross via email to [email protected].

“The format will basically be the same but we’ll be flexible,” she said.