There are few words that spark as much excitement in children around New England as these two: Snow day.

During this age of remote learning, however, they don’t get to hear them as often as in the past. My children were lucky enough to have two snow days this month and they, in my opinion, did not take full advantage of that opportunity.

One of the days they did venture outside to play, but it was maybe an hour’s worth of snowy fun before they came in complaining about being cold and wet.

Now, I am not old enough to pretend I walked two miles to school, each way, uphill, in a blizzard. However, I did have my fair share of snow days and I would have to get dragged inside after hours out in the cold of Massachusetts in the 70s and 80s. At least, that’s how I remember it.

Usually, a snow day included two sets of snow gear. When I got too cold, I’d come in for a quick change and a hot chocolate. I’d slide off my boots and unwrap the Wonder Bread bags that served as insulation for my feet. Snow pants, gloves, scarf, hat, jacket and other layers were removed before starting the layering process all over again with dry clothes. 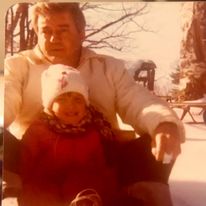 Sledding with Pop in the late 70s.

The house I grew up in was next to an old cemetery on a hill and for some reason, we had a ski jump in the backyard. We also had a five-tiered rock garden. We took advantage of all these elements to create the perfect sledscape. We would start at the top of the cemetery hill, then zoom down the ski jump where we got enough air to fly over the patio, hit the rock garden and end up in the driveway. If we were lucky, we stopped before slamming into the garage. My aunts, uncles, my Poppa and I would spend hours taking that same route on our sleds over and over for hours.

I remember one year my Uncle Don built an igloo in our front yard. It was amazing and large enough for a few people to crawl inside where he had carved out benches in the snow. A couple of adults could sit on the benches without hitting their heads on the roof. Now that I’m an adult, I truly appreciate the time and patience it must have taken for him to build it.

We also made a very large snowman one time that seemed to be 10-feet tall. I was probably about six years-old, so it was likely nowhere near that tall, but my memory is of a frozen, friendly giant smiling down on me. We used food coloring to create mittens and a scarf, and black buttons for eyes. Frosty had a traditional carrot nose, but I cannot remember his mouth.

Chicken soup or tomato soup with a grilled cheese sandwich — and more hot chocolate – would round-out my snow days.

My kids have not always been indoorsy versus outdoorsy. When they were younger, a snow day meant bundling up like Randy from “A Christmas Story” and trudging through the snow. They loved going down their snow-covered slide and making snow angels and snowmen. We never made an igloo, but there was plenty of hot chocolate.

I don’t remember when I stopped loving the cold, magical snow days in New England, but I’m sure it was probably around my kids’ ages. Phone calls with friends and MTV became more interesting to me than snow angels. Today, FaceTime with friends and Roblox trump snowmen. My hope is that when they are adults, they will remember the excitement of a snow day and recall 10-foot snowmen and a mom who played with them.