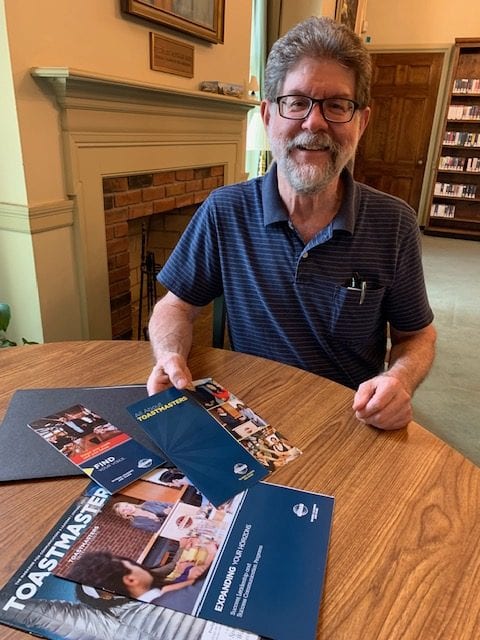 WESTFIELD-A cabinetmaker for 35 years, Steve Lanning found that while he had built his reputation through his work, when an idea for an invention surfaced he realized he wasn’t comfortable “presenting” his idea in front of others. 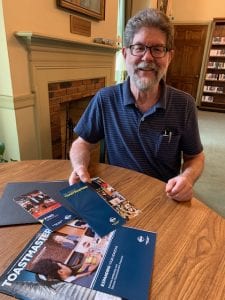 “After I retired, I knew I would have to demonstrate how the invention worked to cabinetmakers, independent shops and manufacturing companies and I knew I couldn’t do it,” said Lanning, who now serves as Division F Director for District 53 of Toastmasters International. District 53 encompasses western Massachusetts down to Windsor, Conn.

Lanning knew he needed to find a way to reduce his anxiety about public speaking and turned to Toastmasters.

“I knew I had to do it and it would be the hardest thing I’ve ever done,” said Lanning during a recent interview at the Westfield Athenaeum.

On the first and third Thursdays of each month, the Prospeakers Toastmasters of Westfield meets from 5:30 – 7 p.m. in the Athenaeum’s Lang Auditorium. Lanning’s “home” club is in Hadley, however, he also attends meetings in Westfield and Toastmasters of Downtown Springfield. As part of his volunteer role as division director, he oversees 17 clubs.

Lanning knows he’s not alone when it comes to the anxiety felt by others when confronted with a public speaking commitment.

“When I started Toastmasters I was quiet and scared,” said Lanning, adding, “just standing up at my chair freaked me out and my heart would be beating rapidly.”

As he now looks back on those early days, he realizes the skills he mastered with the help of officers in different clubs has “changed” his life.

“People in Toastmasters work at their own pace,” he said. “I do stress that people need to clarify their goal of why they want to join Toastmasters, otherwise, life will get in the way and they will quit.”

Lanning said making a commitment and clarifying a goal early in the process is the key to being successful in Toastmasters.

“I’ve only missed four meetings in five years,” said Lanning, noting that perseverance is the hard part but staying with the program will reap dividends for future endeavors.

During a typical Toastmaster gathering in Westfield, there are three parts to the 90-minute session. First, a simple speech called an “ice breaker” allows participants to introduce themselves to the group for four to six minutes.

“The point of the ice breaker is a simple speech about you,” said Lanning, adding, “the point of the exercise is getting up in front of the group and surviving.”

Lanning noted that with simple exercises like an ice breaker, participants “learn by doing and continue to get better in their delivery.”

Participants are also given feedback regarding their vocal output, body language, and sentence structure.

“We offer supportive and positive feedback which empowers others to develop communication and leadership skills,” said Lanning. “The learning experiences help others develop their self-confidence and personal growth skills.”

The second part of an evening includes “tabletop topics” which lasts one to two minutes for each person, and the third segment is the evaluation by the club’s designated evaluator.

“During tabletop topics the rules are loose and we applaud everything which helps people feel supported,” said Lanning. “During an evaluation, participants will learn how often they use common words including ahh, so, like, you know, and um, as part of their dialogue.”

Lanning added that part of the evaluation also includes a person’s volume when speaking, enunciation, body language, and the speech itself.

For individuals who feel public speaking will help them in their personal or professional lives, Lanning said that can be the “spark” to consider Toastmasters.

“It is important to have a crystal clear goal to strive toward,” said Lanning, noting that while he hasn’t pitched his invention yet to businesses, he knows when he is ready – he will do so confidently because of the communication and leadership skills he has learned in Toastmasters.

For more information on the Westfield club including the fee structure, visit toastmasters.org and click on “find a club.” Lanning is also available to answer questions via email at [email protected] or by calling (413) 575-9401.

“It’s a journey of change and for people to allow that change to happen they must stay motivated,” he said.