WESTFIELD – The Westfield Babe Ruth Baseball 13-Year-Old All-Stars, and the other 0-2 tournament teams have likely heard the phrase “when the going gets tough, the tough get going.”
The tough start to the regional tournament continued Friday night for Westfield at Bullens Field, falling to Trumbull (Conn.) in a five-inning (mercy-shortened) affair 15-1.
Westfield and the other three winless teams will attempt to get things going quickly before they find themselves gone.
On Friday night, Trumbull struck quick and often. 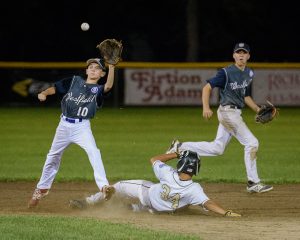 After drawing consecutive walks to begin the first inning, Dylan Moran followed with a run-scoring single up the middle. A bases-loaded walk from Justin Delaney resulted in the game’s second run. Another run scored on Grayson DeFelice’s fielder’s choice to make it 3-0. Westfield starting pitcher Riley Sullivan limited the damage though, striking out the ninth batter of the inning with the bases loaded to end the inning.
Trumbull extended its lead in the second inning to 7-0, the key hits being an RBI double from Jack Wallace and Jack Liguori’s run-scoring single.
For all intents and purposes, Trumbull effectively ended the game in the third inning. A combination of walks, errors, a Luke Masiok RBI double, and RBI singles from DeFelice and Moran made it 15-0.
Westfield broke up the shutout when Danny Provost singled home a run in the fifth before the mercy-ruling was invoked.
In other games Friday, Tri-County (Maine) doubled up Burlington (Vermont) 12-6, Keene (N.H.) routed North Providence (R.I.) 11-2, and Pittsfield edged Newton in an all-Massachusetts tournament game 4-3. All three winners improved their tournament standing to 2-0.
Keene (N.H.) collides with Tri-County (Maine) in a matchup of unbeaten Saturday morning at 11:30. The other two tournament unbeatens, Pittsfield and Trumbull, meet at 4:30.
Westfield returns to action Saturday against Newton (Mass.) at 7 p.m.