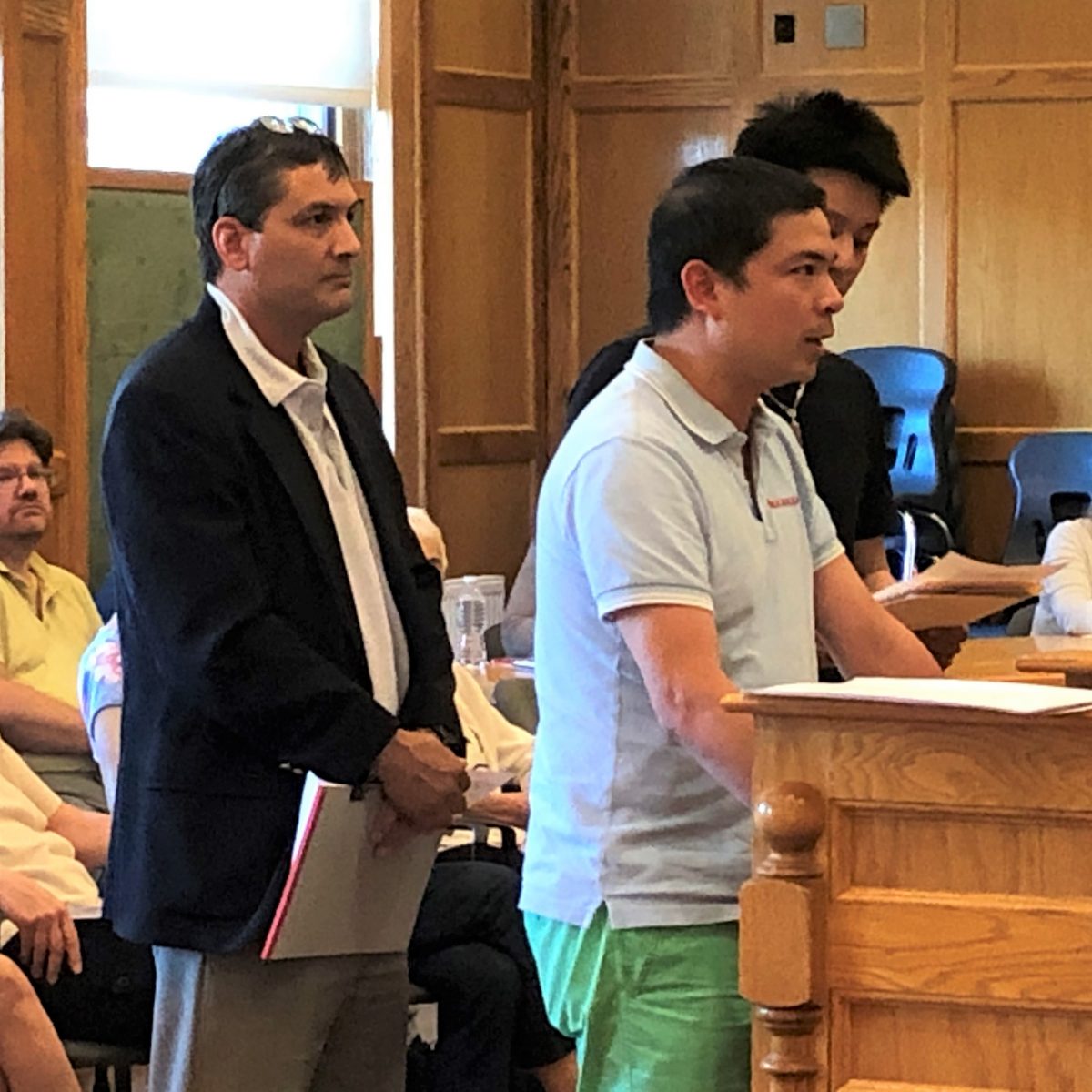 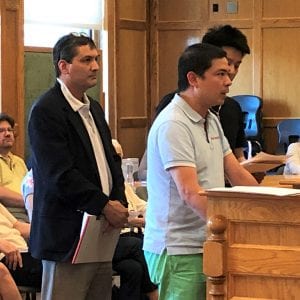 Johnny Chen and partner of FunZ Trampoline and J.R. Cody of DEI Property Management presented the request for a special permit for the trampoline park. (Photo by Amy Porter)

WESTFIELD – Following a public hearing on Monday, the City Council voted unanimously to support the special permit application for the FunZ Trampoline Park, which will inhabit the 50,000 square-foot former Bon Ton space in the Westfield Shops.
FunZ owner Johnny Chen, his partner and J. R. Cody, director of commercial leasing for DEI Property Management, owner of the space, spoke on behalf of the trampoline park. Chen said this will be his fourth park, noting other locations in Rhode Island, Maine and New Hampshire. He said he is also opening sites in New Bedford and Seekonk, Mass., and is looking at locations in Conn.
“We know what we’re doing,” Chen said.
FunZ Trampoline Park will also offer rock climbing walls, a virtual reality space, a small soccer field, softball, basketball, zipline, rope course and laser tag, and offer birthday parties for children.
“We got strong indications that the city would embrace some entertainment,” Chen said, adding that they can change the interior to meet the demand. He said the space will not only be for children, they will offer options for parents.
Speaking on behalf of the project, former City Advancement Officer Joe Mitchell said he and Mayor Brian P. Sullivan have been in discussions with DEI management about the space for over a year. He called the property on the plaza “an important part of Westfield,” and noted that DEI Property Management is one of the top 10 taxpayers in the city.
Mitchell also said a lot of people were looking for family friendly activities. “This could be the anchor that spurs supporting businesses,” he said.
Comments from councilors and the public were mostly in favor of the application.
“We have lost bowling alleys and movie theaters. It’s nice to see someone investing in entertainment,” said At-large Councilor Nicholas J. Morganelli Jr. He also commented on the ceiling height in the space being adequate.
“That was one of the first questions they asked me,” said J. R. Cody.
Ward 4 Councilor Michael Burns asked if FunZ would be offering food. Chen said they would not, but would bring in outside food for birthday parties.
Chen said the business would be open from 10 a.m. to 9 p.m. on Sundays through Thursdays, and 10 a.m. to 11 p.m. on Fridays and Saturdays. He said the busiest times would be Friday and Saturday evenings. During a discussion of the hours, At-large Councilor Matt Emmershy suggested that they make the hours earlier and later on the application for flexibility, but Chen wasn’t interested in doing so. Ward 6 Councilor William Onyski said they could come back with a request for modications, if necessary.
One concerned resident asked whether the children would be supervised, and Chen said there would be spotters on the floor. He also said the trampolines will have safety nets under them, in addition to surrounding them.
“I’m in favor of a good opportunity, anything that brings entertainment. They’re reusing an existing building, currently unoccupied,” said Nicholas Beluzo of Montgomery Road.
Kristen Mello said she was asked to speak on behalf of two resident minors, who were in favor of the plan. “They are interested in trampolines, video, and rock climbing in town.”
At-large Councilor Brent B. Bean, II also expressed support for the project, but said his experience with other locations with his teenage daughter was that the spaces get “dirty and worn out real quick,” adding, “Anything you can do to make sure this is maintained properly.”
Onyski moved to close the public hearing and bring the special permit to a vote, saying it did not require being referred to a sub-committee as the council found it to be a site appropriate use and the specific site adequate. He said under conditions, any substantive change or alteration would require revision of the special permit, and that there be no outdoor storage. The council then voted unanimously for approval
Before the meeting, Mitchell said he, the mayor and DEI were looking at other retail tenants, but the city was interested in an “Amazon resistant” business, and a lot of people were asking for family-friendly activities.
“Brick and mortar stores are having a difficult time,” Mitchell said before the meeting, adding that other mall spaces, such as Holyoke and Ingleside are looking at experiential businesses as tenants. “We want to be proactive, with vibrant, economically viable properties,” he added, saying Mayor Sullivan had worked hard to bring the business to town.
Mitchell said once FunZ occupies the space, there is interest in the other 25,000 square foot space by businesses that would “synergize” with Fun Z.
“We are very happy that FunZ is coming to Westfield,” Mitchell said.