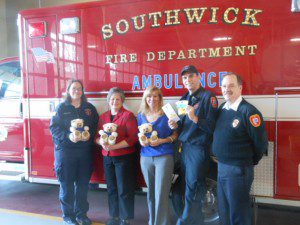 SOUTHWICK – Riding in an ambulance is usually a traumatic and scary experience, especially for a child.
To ease the stress for the youngest riders, the Westfield Kiwanis Club recently donated Trauma Bears to the Southwick and Westfield Fire Departments.
Southwick Fire Chief Richard Anderson said he was thrilled to receive the donation.
“It’s very nice of them to do this,” he said.
In addition to the Trauma Bears, Safe Baby Kits were also given to the Southwick and Westfield fire departments, as well as Noble Hospital and Pediatric Associates of Hampden County. The kits include a home safety checklist, a package of 24 electrical plug protectors, a TempGuard rubber ducky, and information on window safety awareness, burn injury prevention, Sudden Infant Death Syndrome (SIDS), car seat safety and more.
The Kiwanis Club supports many community projects. Westfield club secretary Kelly Silvestri reached out to the Kiwanis Foundation of New England and the Kiwanis Pediatric Trauma Institute for the bears and kits.
Anderson said the bears are a real source of comfort for children.
“When a little kid is in back of the ambulance, there are lights and sirens and people they don’t know,” he said. “So if you can give a child a stuffed animal, it’s something they are familiar with and can relate to and it calms them down.”
Anderson said the bears are kept right in the ambulance. Having a bear to hug can also occupy the child patient so EMTs can take vital signs and treat the child while they receive comfort from the bear.
Although Anderson said transporting children is not all that frequent – “about once a month or so” – having the Trauma Bears on-hand makes a big difference.
The Westfield Kiwanis Club has served Westfield, Southwick and the hilltowns since 1922 and annually raises and distributes more than $50,000 to local charitable causes. The next event Westfield Kiwanis is supporting is the annual New England Invitation Sled Hockey Tournament at Amelia Park Ice Arena April 26-28. The group is also planning its Second Annual Kiwanis Car Show and Fly-in, set for Sept. 7 at Barnes Municipal Airport.