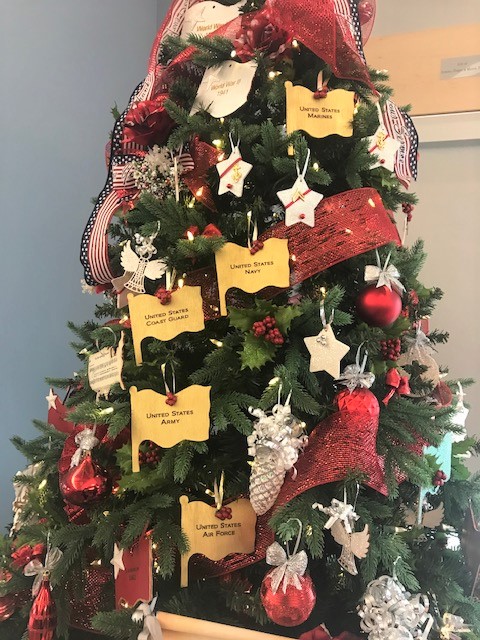 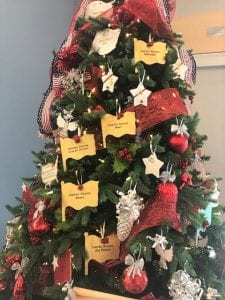 A tree honoring city veterans was created by Barbara Wojick and Marion Kraus for the Westfield Senior Center. (Photo by Hope E. Tremblay)

WESTFIELD – Honoring Westfield’s veterans, police and fire personnel has never been more beautiful, thanks to Barbara Wojick and Marion Kraus.

The two women created three Christmas trees, which are displayed at the Westfield Senior Center, as a tribute to those who have served the community.

The women spent the better part of 2019 planning each tree’s decorations and hand-making ornaments.

“It truly was a labor of love,” said Kraus, whose four brothers and son have served in the military.

Wojick also has military family and wanted to honor their service.

The police tribute tree, located in the lounge, features blue and white decorations, including handmade ornaments with a snowflake and a blue shield with the name of current police officers, fallen city officers and police commissioners.

The fire tribute tree, located upstairs and overlooking the lobby, has a red and gold color scheme. Gold fire symbol ornaments include the names of current and past fire department members and commissioners.

The veterans tribute tree is located in the dining hall and incudes an ornament for all 14 military operations since WWII, as well as ornaments noting WWI and WWII and the five branches of the military.

Kraus said they used angels, stars, and red and white roses to adorn the tree, and several ornaments were especially personal.

“Last year a woman gave us her husband’s military lapel pin,” she said, adding they used that pin as well as her husband and brother’s lapel pins on ornaments.

“That’s what inspired us,” said Wojick.

Kraus’s brother, a Vietnam Veteran, contributed by making a soldier silhouette sign that sits next to the tree and features military patches.

Both women are very supportive of Westfield’s military, something state Rep. John C. Velis, a U.S. Army Reserves Major, can attest to first-hand.

“When I was deployed, they sent me care packages,” Velis recalled. “It really helped me, and I shared what they sent me with people who did not receive packages from home.”

Velis said having that got him through tough times.

“Getting something from home is truly a game-changer,” Velis said of being deployed. “You’re so focused on the mission and when people from your community send you something, it lets you know you’re missed.”

Velis said it’s hard knowing that while on deployment, life goes on back home, and having a package or letter from your hometown helps keep up a soldiers’ momentum.

Wojick and Kraus said they just want to show their support and let the city’s fire and police personnel, as well as veterans, that the community cares.