Jeffrey J. Marques, 34, and Kayla R. Bolio, 28, both of 35B Day Ave., Westfield were arrested after Westfield Police executed a search warrant on the Day Avenue residence to discover multiple firearms as well as class A and B drugs.

According to the statement of facts provided by police in court documents, police had probable cause to be granted a search warrant following a lengthy investigation into the apparent operation.

“The arrests were the result of a lengthy investigation into the sale of heroin out of 35B Day Ave. which led to the search warrant on Monday,” said Det. Sgt. Scott Phelon. 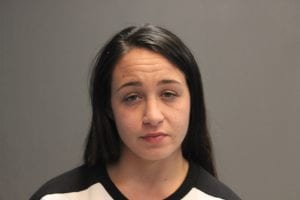 After the search was complete, officers discovered approximately 865 bags of pre-bundled heroin, which equals about 21 grams. They also discovered 67.59 total grams of cocaine, a digital scale with cocaine residue, sandwich baggies that they presume were used to package cocaine, more than $15,000 in cash, and two improperly stored sidearms along with improperly stored ammunition and magazines.

Neither Marques or Bolio have a license to carry according to court documents. One of the sidearms, a Sig Sauer P320, was reportedly stolen from Vermont.

Police said both parties have lengthy criminal histories. Marques was out on bail on previous gun and drug charges out of Springfield Superior Court.

Bolio was out on bail on drug charges stemming from a 2017 arrest in Westfield. Those charges are also being adjudicated in Springfield Superior Court.

The pair is being treated as co-defendants, and were each given the same eight charges. 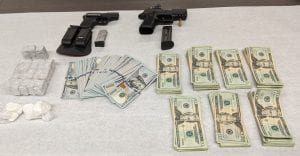 Police Detectives found more than $15,000 in cash, two illegally owned firearms, and enough heroin and cocaine that police believe it was not for personal use. (WESTFIELD DETECTIVE BUREAU PHOTO)

The pair were each originally offered bail for $25,000. However, their bail from previous offenses being adjudicated in Springfield Superior Court was revoked without prejudice due to their arrest Monday. They are being held in the Hampden County House of Corrections pending a Dec. 8 pre-trial hearing.