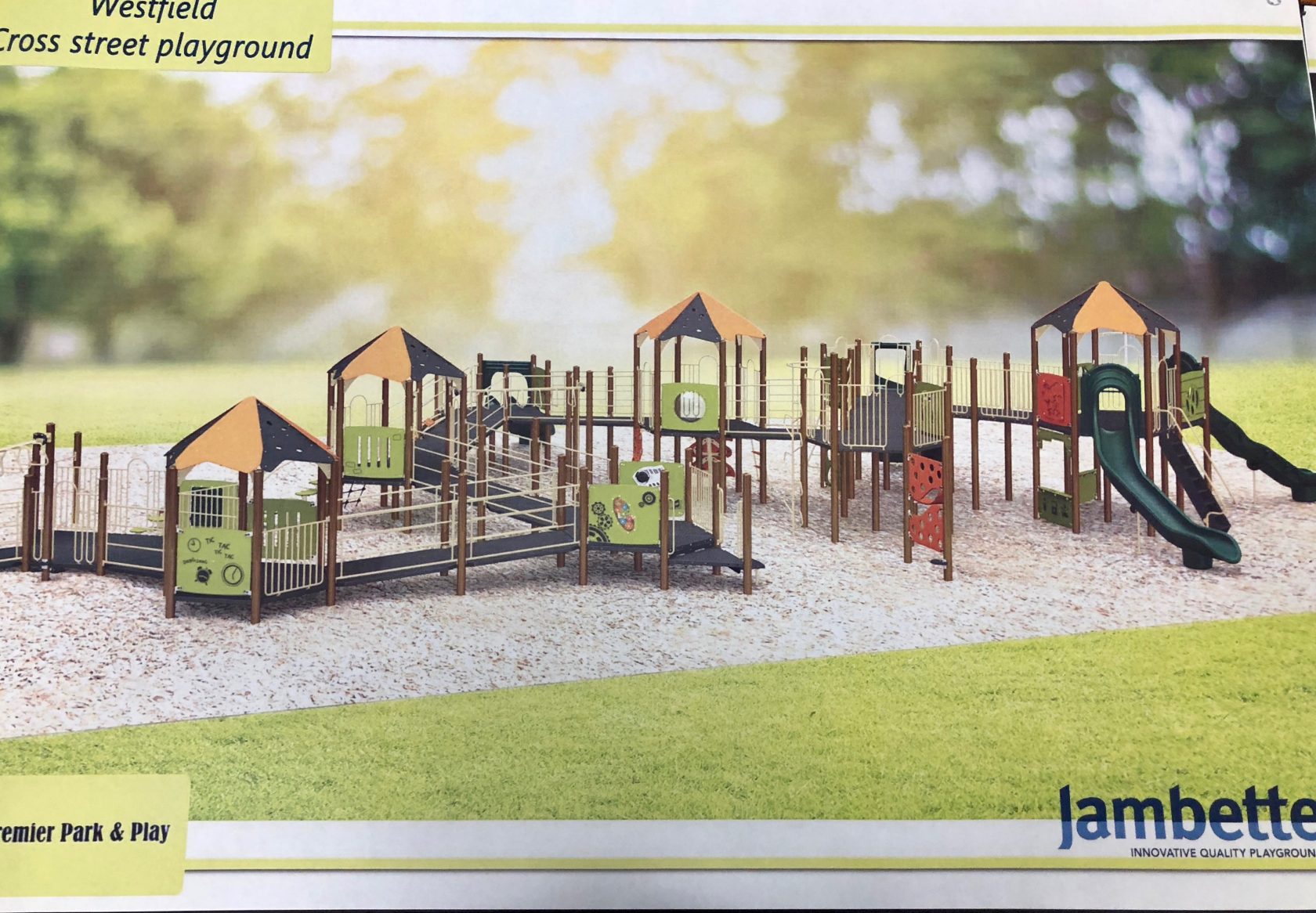 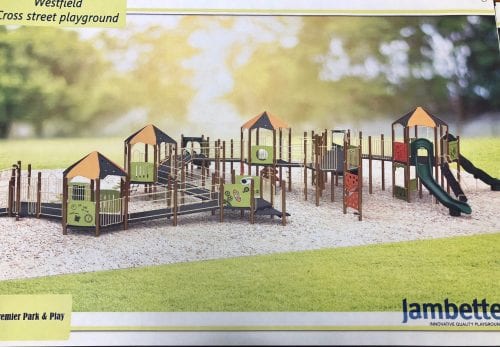 WESTFIELD – Approximately two dozen residents attended the public hearing on the Cross Street playground on March 12, convened by Community Development DIrector Peter J. Miller.
Miller said the city has received the $400,000 PARC grant from the state to erect an accessible playscape and improve the playground. The City Council has also approved matching funds for the project.
Robert Levesque of R. Levesque Assoc. showed preliminary feasibility plans for park improvements which he is designing for the city. He said he will be putting the plan out to bid in April for construction.
The primary feature of the park, for which the city received the grant, is the accessible playscape. Levesque said it will be similar in size to the playscape in Stanley Park, and will have multiple accessibility options, including a ramp to get onto the structure, play canopies, a swing set, and some sort of shelter area.
The plan for the park includes repairing and providing irrigation to the fields, and putting in a walking path.
Also shown in the plan are 40 parking spaces, which Levesque said will likely go out to bid as an add alternate. “They may not be funded, but we will at least have some idea of the cost,” he said.
Miller said not shown in the plans is a rubberized surface on the playscape for wheelchairs. The cost of the surface is $200,000, one-fifth of the total project cost. Miller said half of the $960,000 allocated for the project will be spent on the playscape, and the rest on enhancements to the entire park.
“I would like to know that the rubberized materials will be safe for the environment and people. Is there a process,” asked At-large Councilor Kristen Mello.
Levesque said he would share with her the specifications provided by the manufacturer.
“We really want to make sure that any mockup is safe,” Mello said. 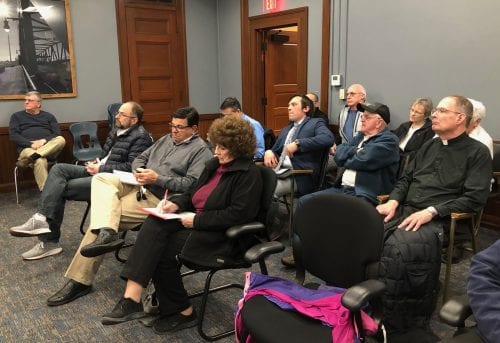 “Our goal is to return it to the place where it is one of the jewels of Parks and Recreation,” Miller said, adding that the playscape that the city erected in Whitney Park was “a real boon to the neighborhood. We’re looking to do that again.”

Mike Raposo and Scott LaBombard of Westfield LIttle League asked whether the baseball field at Cross Street that was taken away seven years ago will be added.
Raposo said currently they have 26 teams playing on three fields, and only ten hours a week to practice. “We call ourselves a baseball town, but the missing ingredient is another baseball field,” Raposo said, adding, “I hope that’s considered as this project keeps going forward.”
Miller said it’s something the city has looked at. “We’re working a little on a shoestring, but we can price it out,” he said. He said anything beyond the $960,000 allocated will have to be requested in addition from the mayor and city council.
Ward 2 Councilor Ralph J. Figy said he has concerns about putting in a baseball field versus a softball field, taking into consideration Title IX requirements of equal opportunity for women in sports. He said Westfield Technical Academy does not have a field for softball.
LaBombard said he didn’t disagree, but Cross Street had always been a baseball field. “The numbers are in Little League. Sadie Knox fills our need with the numbers of girls in the program,” he said.
“We could easily have a shin (all dirt) infield which could be used for Little League and softball,” Raposo said.
Father William H. Wallis of St. Peter and St. Casimir Parish asked whether the plan included the fence that separates the church parking lot from the playground. He said the existing fence ends two-thirds of the way on the right-hand side and has a hole in the center.
“This one stays,” Miller said, adding that they are putting in the plan doing the entirety of the fence.
“I would like to see the city benefit as much as possible from the property,” Wallis said after the meeting, adding that the church had sold the city a section of the land.
“As long as the majority of the perimeter of our parking lot is fenced off, I’m not going to worry about it,” he added.
Miller said the real issue of the day, and the reason a number of residents came to the meeting was a letter they had received dated March 3 from DPW Director David Billips about the fence separating the park from several private properties on the eastern side of State St.
“We were informed by the Division of Conservation Services that we are in violation of limited access by the fence,” Miller said. He said the fence is 22 feet off property line, which adds up to half an acre behind the fence that is not accessible to the public.
He said the city has submitted a plan to take down the fence and open access to that part of the property going forward.
Miller said the city is aware of encumbrances there, such as sheds, which are over the public property line. “We’re looking to satisfy DCS if we can.”
According to the letter, the fence has been on the property for a significant period of time, and pre-dates the covenants that were placed on the playground in the early 1980’s. “The city was under the interpretation that due to its pre-existing status and its delineation on the document that detailed the restriction that we were in compliance with federal requirements. On February 4 we were told that we are not in compliance and that the fence needs to be removed.”
Questions and comments from residents about the fence included whether they would be responsible for protecting their properties going forward, who would maintain the property behind the fence that residents have maintained for 65 years, and what the timeline would be for them to move or remove sheds and other encumbrances.
“If you want to protect your property, it’s on you to put up a fence,” Miller said.
Billips said the city would maintain the strip, which will be converted to all grass. He also said they plan to remove the fence in a couple of weeks.
At the request of Ward 1 Councilor Nicholas J. Morganelli, Jr., Levesque said he would mark the property line as a courtesy to the homeowners.
Miller said the city would work with the homeowners on removing encumbrances. When told they need four to six weeks, Miller said he wasn’t going to make it that fast.
Miller also said he would be looking into possibly converting a comparable area of property in the parking area, currently owned by the School Department, to satisfy the public access requirement. However, he said he could not accomplish that in the next three to six months.
“At some point we may look at doing a full conversion,” Miller said.
“We got blindsided by the letter a little bit,” commented one resident.
“We had to put you on notice. It’s something we were required to do,” Miller said.
“I may start selling baseballs back instead of tossing them back,” said another resident jokingly.
“I think this is going to be a big improvement to the neighborhood,” Miller said.