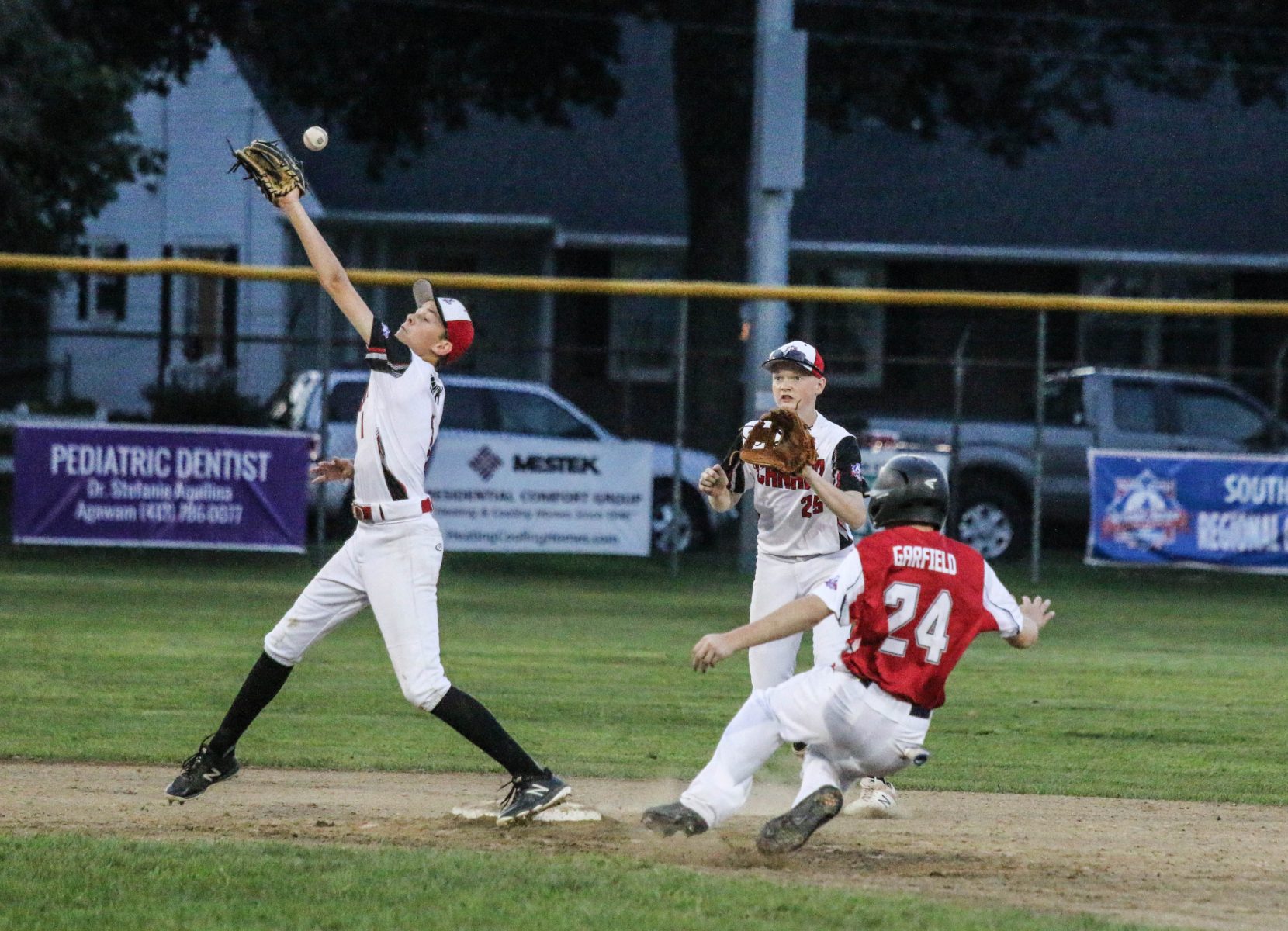 WESTFIELD – A year ago, Westfield native Kacey Bellamy and the United States women’s ice hockey team broke through against Canada to win a gold medal at the Winter Olympics. It might not be the same sport, but our neighbor north of the finally got its just revenge.
Herman Figueroa scattered five hits, striking out six batters, and Calgary, Alberta (Canada) put together a 3-run, sixth inning to pull away from Westfield, eliminating the host city from the Babe Ruth Baseball 13-Year-Old World Series on the final day of pool play Monday night at Bullens Field.
“We played our hearts out for four games,” Westfield manager Dick Lenfest said. “These guys really got to hold their heads high in what they did. We had a chance in every single one of these ballgames to come out on the other end.” 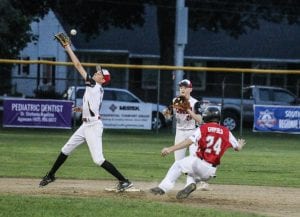 Canada drew first blood.
Aaron Krueger reached on an infield error — Westfield’s second of the game — to lead off the top of the third inning. A perfect sac-bunt from Quaid Power moved Krueger over to second base. Krueger advanced to third on a wild pitch. A run-scoring single through the right side from Herman Figueroa made it 1-0.
The inning continued on.
Emmett Scott followed up Figueroa’s single with a base hit of his own. A Jackson Trea walk loaded the bases. With two outs, Westfield starting pitcher Jacob Mello hit Zack Wagstaff with a pitch, giving Canada a 2-0 advantage.
Westfield had several opportunities to score, especially early on. The host team stranded two base runners in each of the first three innings.
In the first, Mello singled and Connor Niemiec was intentionally walked before Figueroa forced a fly out to center field to end the inning. In the second, Emmett Garfield walked and stole second base, and Zach Olsen clubbed a base hit to right field before stealing second. Again, Figueroa got out of a jam with a fly ball out to center. In the third, Mello reached after being hit by a two-out pitch. Niemiec singled to center field. Figueroa recovered though to strike out the next batter to end the threat.
Westfield got another base runner on in the fourth when Riley Heeter reached on an error. Figueroa forced a ground out though for the inning’s third out.
Finally in the fifth, Westfield cracked the goose eggs on its side of the scoreboard. Noah Lewis walked. Colby LaPoint singled. The ball got by the right fielder, allowing Lewis to get to third. LaPoint was caught stealing. With two outs, Mello belted a run-scoring double to cut the host city’s deficit in half.
It would be the closest Westfield would get since they trailed 1-0.
Canada extinguished Westfield’s plans on playing another day, piling up three runs in the sixth. Zack Wagstaff reached on an outfield error. With one out, Brendan Churchill singled to make it 3-1. Mitchell Fink collected a base hit. Aaron Krueger singled to take a 4-1 advantage. Then, Quaid Power laid down a suicide squeeze to seize a 5-1 lead.
Figueroa retired three of the four batters he faced in the bottom of the sixth, and forced a fly out in the seventh before being lifted for reliever Krueger. Krueger faced two batters, striking out the first and getting a fly out to end the game.

Midwest Plains (Fargo, ND) 13, Southwest (Meridian, MS) 5
The stage was set this morning for the two undefeated teams in the American Division, both with a 3-0 record. The Southwest champions from Meridian (MS) fell behind early and just could not come back in a 13-5 loss to the Fargo (ND) team. The high-powered Fargo offense put together 13 hits total, coming from six different players. Connor Holm, Charlie Kalbrenner, and Jaxon Beiswenger each claimed three of those hits, with Jordan Leininger, Drew Rerick, and Bo Merier all adding onto the offensive push. Holm put on an offensive showing, going 3-for-4 at the plate, waking once and knocked in three RBIs. Southwest started scoring in the first inning, but could not catch up to the Fargo defense that put up six runs in the second, five in the third and two in the top of the seventh to clinch the win. For Meridian, Brett Busbea went 2-for-2 at the plate, with Cannon Graham, Fred Liddell, Jake Shelby, Braxton Cornish, Jace Wiggins and Andrew McCary all adding on with a hit each. Graham, Liddell, and Shelby each knocked in three of the five runs for the Meridian offense. Fargo improves to 4-0, while Meridian falls to 3-1 in the final day of pool play. At the end of the game, one player from each team is selected as the Ron Tellefson “Player of the Game” based on skills and sportsmanship. For Meridian, Brett Busbea was the winner and for Fargo, Connor Holm received the award.

Pacific Northwest (Spokane, WA) 4, New England (Pittsfield, MA) 3
Although the Washington defense allowed three runs to the Pittsfield offense in the second inning, they were able to come back with a 4-3 win over the New England champions. Washington put up an early run in the bottom of the first, but Pittsfield responded by pushing three across in the top of the second to take the lead. In the bottom half of the inning, Washington plated two – tying the game at 3-all. Spokane took the lead for good with another run in the bottom of the fourth inning and was about to hold off the Pittsfield offense for the rest of the game. Each team relied on one pitcher to take them the distance. Evan Blake and Nate Fitzpatrick both threw very well for their teams, with Fitzpatrick dominating by striking out six, walking no one and allowing only one earned run. For Pittsfield, Antonio Scalise claimed two of the five hits, with Keegan Crouse, Owen Salvatore, and Damon Pause accounting for the other three. Crouse, Salvatore, and Cam Sime were the three that were able to score for the Pittsfield offense. Spokane was able to push across their four runs by stringing together seven hits. Kole Legrant, Easton O’Neal, Xavier Hattenburg, Nate Fitzpatrick, Zach McCurtrey, Henry Sandberg, and Drew Rayment each had a hit for the victorious Washington team. At the end of the game, one player from each team is selected as the Ron Tellefson “Player of the Game” based on skills and sportsmanship. For Pittsfield, Nick Brindle was the winner and for Spokane, Kole LeGrant received the award.

Game 19: Southeast (Greenville, NC) 9, Mid Atlantic (Centre County, PA) 1
The Southeast Regional champions from Greenville (NC) defeated the Mid-Atlantic champions 9-1 today thanks to a timely six runs in a big fifth inning. The Greenville boys combined for 13 hits, with their first four hitters getting credit for nine of them. Cole Smith, Andrew Wallen, and Collin Woolard and their No. 9 hitter, Jay Clemmons, each had two while Collin West had three. Marcus Byrd and Davis Hathaway added on with one hit apiece. Smith and Wallen also contributed by pushing two runs across the plate. Greenville was also very disciplined at the plate, only striking out once throughout the entire game. Marcus Byrd threw a dominant five innings, scattering only four hits and only allowing one walk. Matthew Conway and Aaron Holly came in to finish out the game, only allowing one earned run to cross the plate. The Mid Atlantic offense came so close to scoring more runs, but was not able to put things together in a timely fashion to finish the job. Braedyn Kormanic and Weston McClain each had two hits for Pennsylvannia, with Camron Watkins and Tyler Serb adding on one each. Braedyn Kormanic started on the mound for Pennsylvannia, going four innings and allowing six runs on 10 hits and walking none. Tyler Serb and Camron Watkins entered the game from the bullpen, throwing one inning each. At the end of the game, one player from each team is selected as the Ron Tellefson “Player of the Game” based on skills and sportsmanship. For Greenville, Collin Woolard was the winner and for Pennsylvannia, Camron Watkins received the award. – Additional game reports courtesy of Annalise Eak