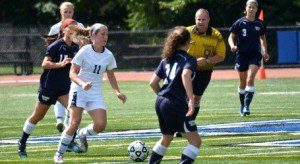 BRIDGEWATER – Westfield State University posted a 2-0 win over host Bridgewater State University in Massachusetts State Collegiate Athletic Conference (MASCAC) women’s soccer action on Saturday, Oct. 27, at Swenson Field.
The game marked the regular season finale for both teams. The visiting Owls remain unbeaten on the season with the win as they improve to 16-0-1 including a 7-0 mark in the MASCAC. Westfield earns a first round bye in next week’s MASCAC Tournament and will host a semifinal round game on Friday, Nov. 2. Bridgewater falls to 8-8-2 overall and 4-2-1 in conference play. The Bears are seeded third in the tournament and will entertain sixth seeded MCLA on Tuesday afternoon at 3:30.
Sophomore defender Sarah Sypek (Westhampton, Mass.) and freshman forward Marisa Sprague (Dalton, Mass.) scored second half goals for Westfield, and junior goalkeeper Jess Habif (Natick, Mass.) made nine saves to post her fifth solo shutout of the season and the team’s 11th.
Sypek opened the scoring in the 55th minute as she intercepted a clear attempt just inside the 18 and beat the BSU keeper with a shot to the right side. Sprague scored on a breakaway in the 86th minute off an assist by senior forward Brittanie McGregor (Ludlow, Mass.).
Bridgewater senior netminder Kristen Rowe (Burlington, Mass.) made four saves between the pipes for the Bears. Freshman defender MaryRose Griffin (Whitman, Mass.) made two saves as she played the final nine plus minutes.
The game also marked “Senior Day” for the Bears as Rowe and fellow seniors Molly Copeland (North Falmouth, Mass.) and Melanie Thomson (Abington, Mass.) were honored at halftime.