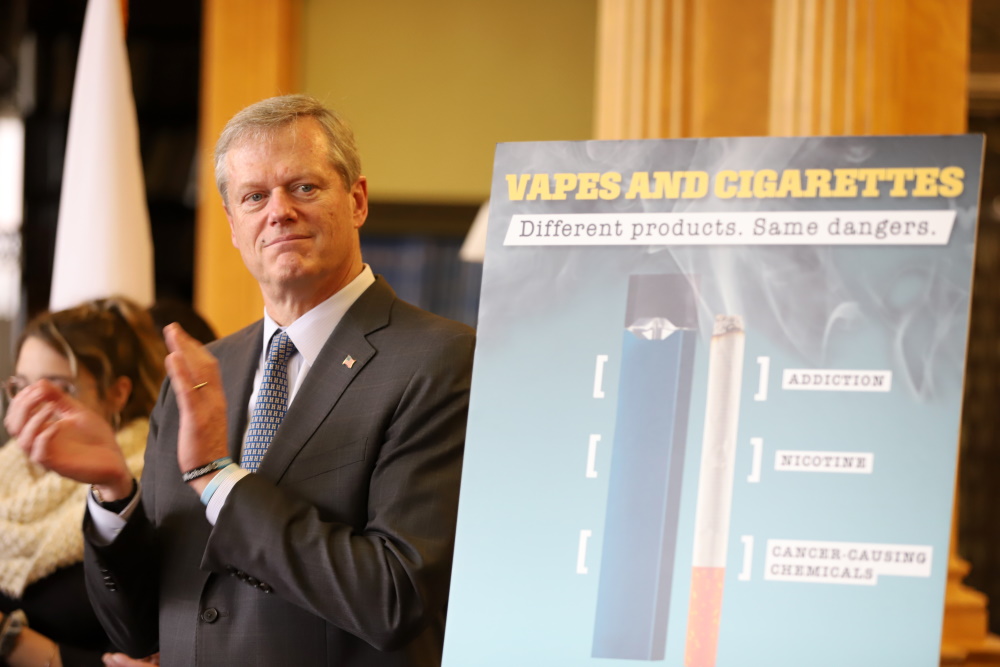 Gorilla Vapes is one of several vape shops in Westfield and Southwick that has reported a severely negative impact to their business since the vape ban began. (Photo by Peter Currier)

WESTFIELD- The state bill that would ban all flavored tobacco products in Massachusetts was signed by Gov. Charlie D. Baker last week, hours after he announced that the total ban on vape sales would now end on Dec. 11.

Local vape shop owners in the Greater Westfield area expressed negative reactions towards the governor’s moves, as they will be able to sell their primary products again for the first time in months, but with a far more limited stock than before.

Some local shop owners, such as Joe Iarusso of JJ Vapor House on College Highway in Southwick, do not believe shops like theirs will be able to remain open at all with the new guidelines.

“You can’t sustain being open on just tobacco. We have two tobacco customers,” said Iarrusso, “we may as well shut our doors if we can’t sell the flavored products.”

Most of the tobacco products seen here at No Limits Vape and Smoke Shop will have to be removed from the shelves due to them being flavored. (Photo by Peter Currier)

Iarrusso said that his store was able to remain open since the ban began in September by selling smoking accessories, but the new law will not allow him to remain open for much longer.

The bill was sold by its supporters as a way to keep vaping products out of the hands of children. The reasoning used was that underaged kids who vape typically do so because they enjoy the flavors.

Chris Kasperek, the owner of Ace Vapor, disputed that logic, saying that a majority of his customers are between the ages of 30 and 70, and that the vast majority of them choose to use the flavored vaping products.

“People just simply like flavors. It’s not just kids having them,” said Kasperek.

Kasperek said that it is likely that he will have to close the vaping portion of his store. 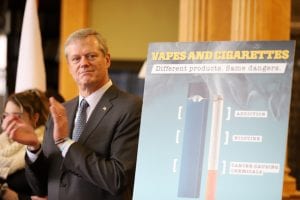 State Sen. and Mayor-Elect Donald F. Humason Jr. and state Rep. John C. Velis both voted against the bill in their respective houses. It first passed the House of Representatives overwhelmingly with a vote of 127-31. It passed in the Senate the following week with a vote of 32-6.

“You can tell someone fighting overseas in the military that they can now not smoke vanilla pipe tobacco,” said Humason shortly after the Senate vote, “I am a rabid anti-smoker, but I still think that if you’re 18 and you’re an adult, then you’re smart enough to decide what is beneficial for you.”

Other local shop owners, such as those at No Limits Vape and Smoke Shop in Westfield, have expressed mixed reactions to the news. Co-owner Fathima Ashra said that she is happy that they will be able to sell any of their vaping products at all, even if it is just the unflavored versions.

The ban on vape sales enacted by Baker on Sept. 24 included the sale of marijuana vape pens in recreational dispensaries in the state. The ban was originally enacted due to a spike in lung illnesses across the country that were blamed on vaping, including several cases in Massachusetts.

The Center for Disease Control recently released a report that claims the lung illnesses were not caused legal vaping products, but by black market THC cartridges that were cut with vitamin E acetate.

The state’s Cannabis Control Commission recently placed a quarantine on the sale of marijuana vaping products for recreational use while they investigate the contents of THC vaping products. It is unclear when or if that quarantine will end.