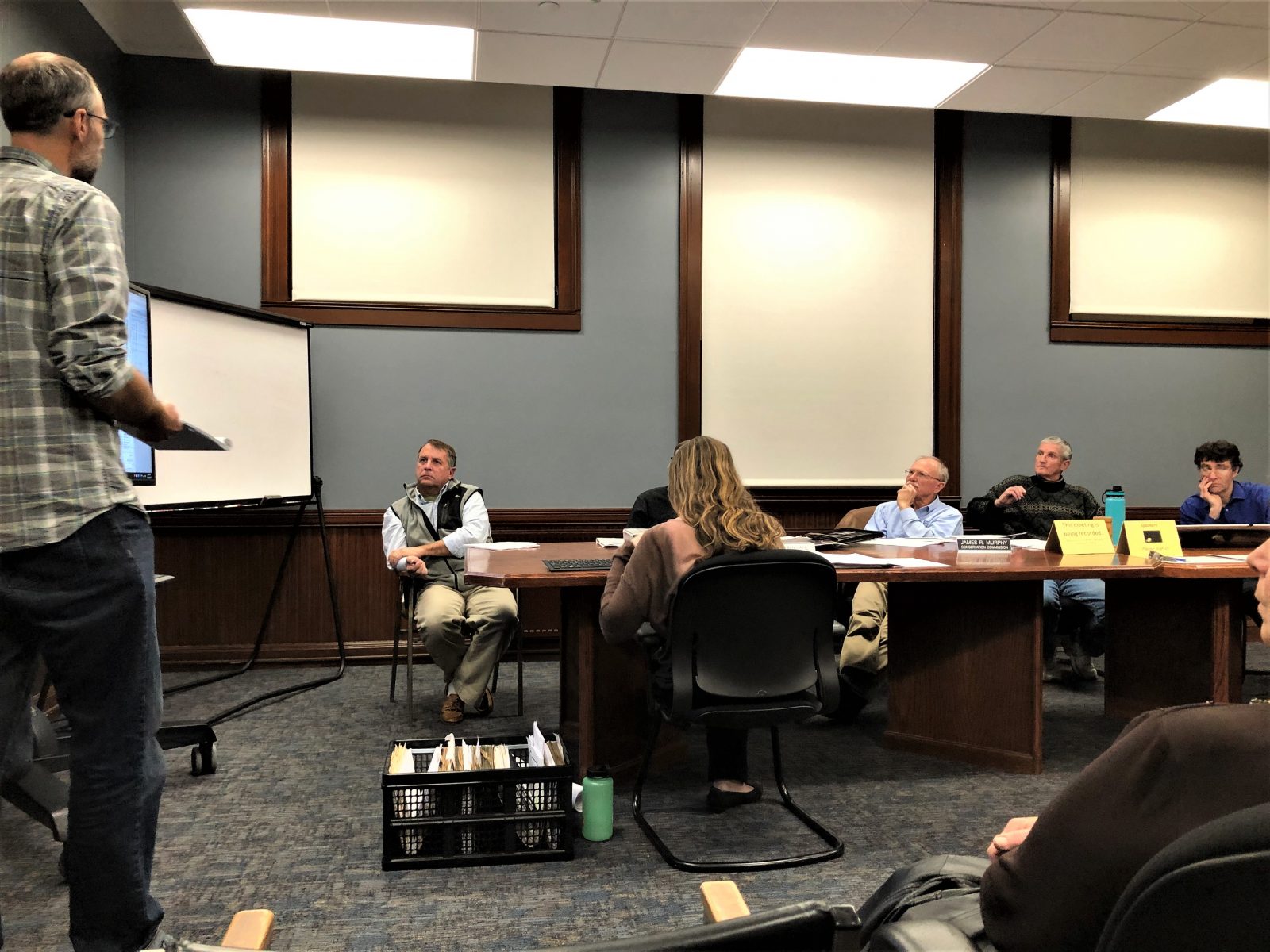 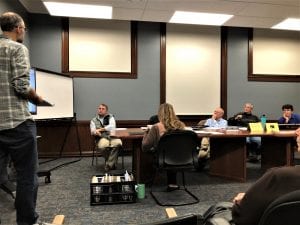 GZA was hired by land owners Mark and Chris Dupuis to address wetlands violations for illegally clearing approximately 9 acres on the property, intended for a hemp farm.
GZA also submitted for the approval by the commission of Engineer Terence R. Reynolds of T. Reynolds Engineering in Florence, to look into the brook crossing and stormwater piece. Commissioner Alex Fagnand said he had previously worked with Reynolds, and the selection was approved.
“Let’s get this site stable for winter,” commented Conservation Coordinator Meredith Borenstein at the beginning of the presentation.
Rogers showed a map of wetland areas in the cleared land, including the bordered vegetative wetlands on both sides of Barry Brook, a perennial stream on the property, an isolated wetland, and a bordered vegetative wetland along an intermittent stream.
“The goal is to get some measure of control over the site, (which has) open bare soils. So far, there is good capacity on site to hold moisture. Eventually, we need to put something down to prevent sediment being transported,” Rogers said.
He said their proposal, which incorporated comments from Massachusetts Fish & Wildlife, is to not seed or mulch at this time, because they want the stream to re-establish itself, in order to guide them to the restoration of the area.
Rogers said they need to put in something to corral the sediment and they want to see the channels start to develop. Initially they proposed putting in straw wattles and berms, but changed the plan to composition fiber socks because they didn’t want apertures that animals could get stuck in. There are identified endangered species on the parcel.
The fiber socks, preferably burlap, will be placed away from the bordered vegetative wetland, and shaped to bend upstream. They will also be used down the grade of the road to prevent slide sloping. No wood chips will be used. An environmental scientist will be on site to guide the contractors, Rogers said.
An immediate goal is to take the concrete bags out that were placed in the wetlands, one of which is broken. Rogers said any scoopage will be shoveled up and scooped by hand, under the guidance of the environmental scientist.
Rogers said the removal of the concrete bags will involve taking a truck up and down the road, which will impact the area. They plan to lay 8-foot plywood on the road to minimize further impact. He said at the same time they would like to return the stumps that were placed on the property line in the buffer zone to store them in the area they were taken from.
“We think it would be ecologically beneficial to store them within the area they were taken from. Putting the stumps back puts erosion control in place. We’re proposing doing that now, putting them down randomly,” Rogers said.
Commissioner Thomas Sharp, who served as chairman pro tem for the meeting, asked how the stumps would help with the stabilization plan. He said his concern was to get it done right, not fast.
Rogers said they want to get the stumps out before it freezes. “Coarse wooded debris is very valuable. It gives landscape wildlife places to hide,” he said.
Commission member James R. Murphy, Jr. asked how many stumps they were thinking of moving.
Rogers replied 68 stumps.
“By doing this now, when we get to the restoration, we may never have to have vehicles there again,” he said, adding that it would take at least four trips, over the 8 foot wide plywood on the path.
Murphy said he didn’t have the same concerns about putting the stumps back now, which he thought was a good idea, but about the equipment it would take to do it.
Rogers said they would either use a jeep with a drag chain or a mini-excavator with a chain. He said they would use the smallest possible equipment. “We don’t want a big excavator there. With a mini you can roll them,” he said.
He said the existing trees are about 35 feet apart and they would lay the stumps at that distance, with some upright, and some tripped over, mimicking a wind throw event, which Murphy agreed was a good idea.
Rogers said they will also need Mass. Fish & Wildlife permission to do it.
They also plan to blow straw in the area to stabilize it after placing the stumps. He said the tubing is designed to stay in place 12 to 15 months, and the stumps will also stabilize the area.
“What we’re doing is what most people would be doing,” Rogers said, adding, “I want to put your buffer zone back.”
Murphy said he wanted the stumps back to serve their biological purpose.
“We’re trying to correct this. It’s a clean canvas that needs to be worked on. This is putting out woody debris, as part of the restoration plan,” Rogers said.
The commission voted to accept GZA’s report for remediation, and added the condition that the stumps be moved back to where they came from. They also conditioned that any contractor be approved by Borenstein.
“All this is subject to Mass Fish & Wildlife approval, which should happen quickly, because they want immediate remediation before winter,” said Ward 6 Councilor William Onyski, who was present at the meeting.