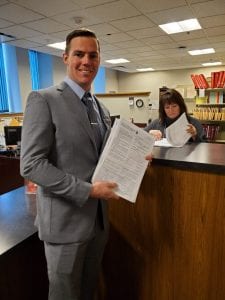 WESTFIELD – Following the decision to postpone the Special State Election that was slated for March 31, Senate candidates John F. Cain and John C. Velis spoke to their disappointment and their priorities for the district.

Cain, a Southwick Republican and business owner, and Velis, a Westfield Democrat and the city’s state representative, are both seeking the 2nd Hampden and Hampshire Senate seat. The vote is now scheduled for May 19.

According to State House News, in all four races primary voters have already decided the party’s nominee, leaving the general special elections remaining. Two Senate seats last held by Republicans — who now hold just four of the 40 Senate seats — are up for grabs in what’s now a May 19 election. The Senate set that date via an order it adopted Monday afternoon. June 2 is the new special election day for voters in two House districts.

Cain said the residents need a voice in the Senate now more than ever.

“As a citizen of a small community in western Massachusetts I feel that we need to have a strong voice in Boston at a critical point in history,” Cain said. “Aside from the dedication to spreading my message throughout the district, as a candidate I know how important our representation is at the State House.” 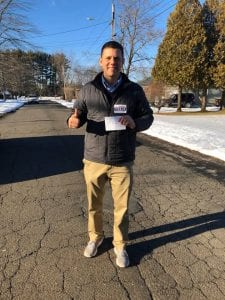 John C. Velis gives the thumbs-up after turning in 1,000 signatures to earn a spot on the special election ballot. (THE WESTFIELD NEWS PHOTO SUBMITTED)

Cain said the logistics of postponing would be “expensive” and he was concerned that it would further delay representation “or all 11 communities who are without a voice and have been since January.”

Cain said with the pandemic barely in full swing, a senator is needed in the district.

“The impact of this pandemic will continue to devastate our local economy with greatest impact on small businesses and their employees,” he said. “Without a strong fiscally responsible voice with experience in business operations to ensure our resources are allocated properly, the communities of western Massachusetts will not receive the proper support to maintain and rebuild.”

Velis said while he had hoped the election would occur, his priority right now is public health.

“It’s disappointing after campaigning day and night for the past several months, but I respect the decision that has been made,” said Velis. “The health and safety of residents in the 2nd Hampden & Hampshire District and the Commonwealth as a whole is of the utmost importance.”
The coronavirus is at the forefront of Velis’ work in the House.
“My legislative office has been flooded with calls over the past week. Today, my head has been elsewhere. I started my day by going to the funeral of a constituent whose mother passed away. The service itself had to be limited due to public health concerns. My office has received more calls and emails from constituents than any other day during my six years as state rep.”
Velis said he is hearing residents’ concerns and working with his colleagues on answers.
“I’m getting calls from small business owners who are wondering if they’ll have to close up after this time period; from seniors who are wondering how they’re going to get to their next medical appointment; how constituents will pay their mortgage or rent if they’re not working; from parents who are wondering if their children will still have to pass the MCAS exams; from people who can’t tell if their work is qualified as essential or not and what they’ll do if it isn’t. My utmost concern right now is doing my job and having the back of the people who elected me to do exactly that,” said Velis.

Working together to address this crisis is Velis’ number one job, he said.
“Many are worried about how they’ll recover from this period. My priority now is telling them how we’ll recover from this period, together. I am addressing their needs and concerns 24/7. This is why I got into public service, and this is what this moment requires,” he said. “At the end of the day, I ran for office and got elected to serve constituents. So that’s what I’m going to do, be of service to my constituents.”