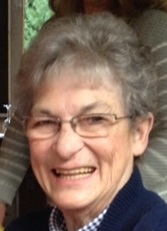 WESTFIELD: Virginia Ruth Shaw, a caring wife, mom, friend, and grandmother passed away on April 30th, 2016, ten years to the day since losing her husband Charles Dudley Shaw. Born in Westfield to Henry and Connie (Gonzales) Giroux, she was a lifelong Westfield resident. Throughout her married life Virgnia was devoted to being a fantastic mother to her four children; Donna Kotowski (Jim), Karen Sadowski (Ralph) Connie Collins (Todd), and Chuck (Kim). As her kids grew older Gussie expanded her horizons from Motherhood, The Card Club, and Bingo with her neighbors to include employment at the Silver Street Superette.  From there Virginia was promoted to being a caregiver to all of her grandchildren, and later in life she became a volunteer at Noble Hospital. Virginia was always a vocal supporter of local sports teams despite the stress caused by watching the Red Sox in the playoffs and the Patriots face yet another scandal. But her greatest enthusiasm came when cheering on the teams for which her grandchildren played;she rarely missed a game, play, or concert of any of her grandchildren. While she would deny it, Virginia had a natural gift for the arts, she loved to draw and had a knack for crafts such as ceramics and woodworking. One constant in Virginia’s life was the love she had for her family, and along with her four children Virginia is survived by 10 grandchildren and 1 great grandchild. Virginia’s family would like to thank the nurses of 2 North at Noble Hospital, and those at the Governor’s Center for their great care and compassion. At Virginia’s request a private graveside service was held on 5 May, 2016. Memorial contributions may be made to the Dakin Humane Society, PO Box 6307 Springfield, MA 01101.