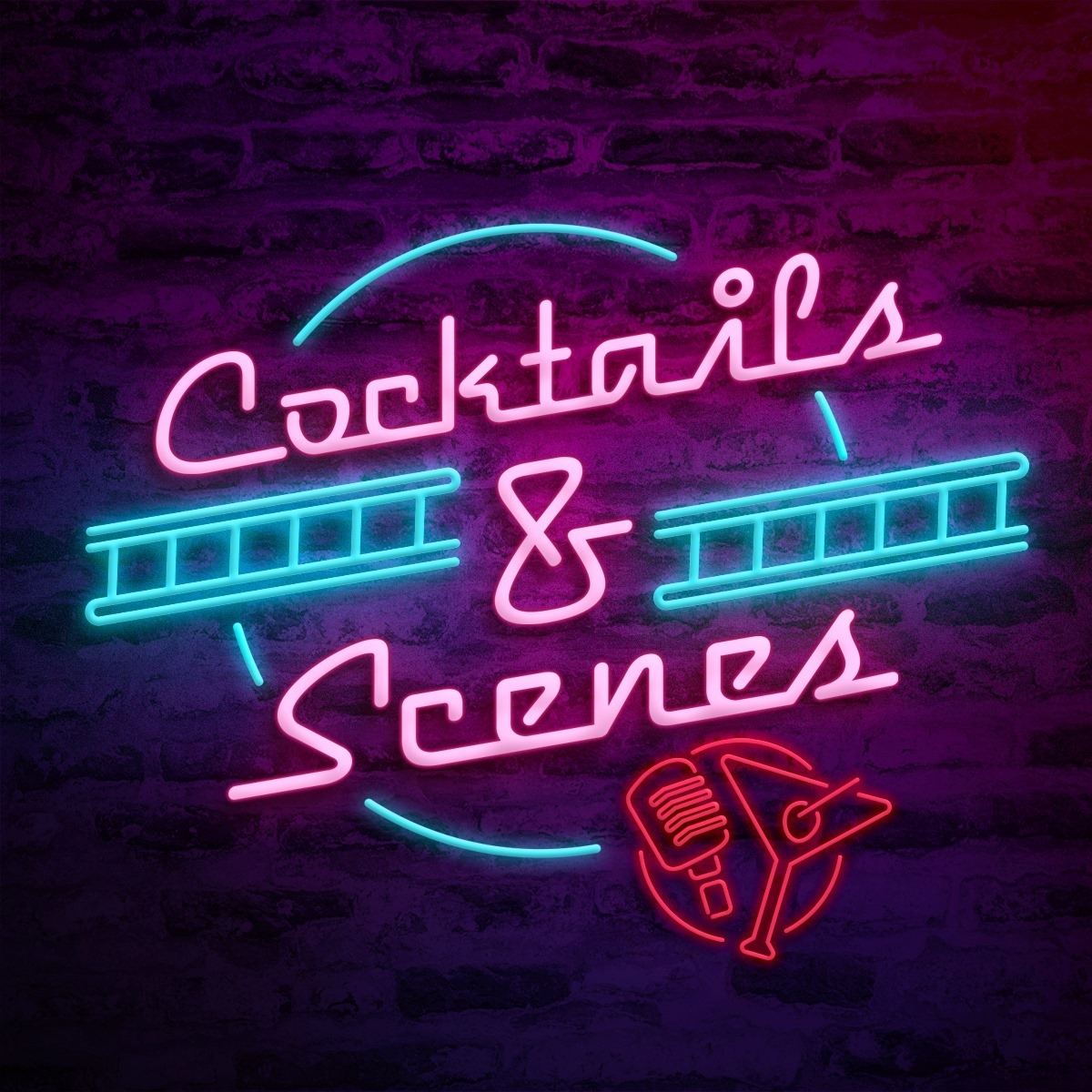 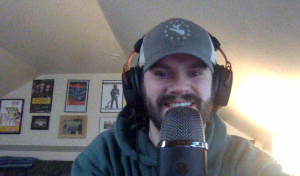 Westfield resident Will Martin, co-host of the “Cocktails and Scenes” podcast. (SCREENSHOT)

WESTFIELD – “Cocktails and Scenes” is a new podcast with a focus on – what else? – adult beverages and movies.

Co-hosted virtually by Westfield resident Will Martin and Pennsylvania resident Wayne Lawler, the podcast focuses on the movie buffs’ top five movies on a weekly topic.

Martin and Lawler have long been movie fans with a special place in their hearts for Tom Cruise, evident in the nod to cruise’s 1988 movie “Cocktail” in their podcast name and logo. When the co-workers “met” last year via zoom they hit it off and became friends, bonding over movies.

“We are a fully remote company, so we do a lot of video calls. I have a James Bond ‘Dr. No.’ poster in my home office and Wayne and I are both huge James Bond fans, so we started our conversation from there and realized pretty quickly we shared a lot in common, most importantly a shared passion for movies — and cocktails,” said Martin.

“You could say we ‘bonded’ over ‘Bond.’ I saw a James Bond movie poster on his wall during a video call and the rest is history,” said Lawler. “Even though our top movie choices aren’t always the same, our movie conversations flow naturally with both of us having a shared passion for the industry and it just felt right to include cocktails into the mix.”

Martin has longed to incorporate movies into his life for years. 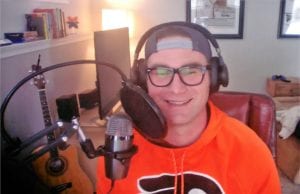 Wayne Lawler co-hosts the “Cocktails and Scenes” podcast from his Pennsylvania home. (SCREENSHOT)

“Reviewing movies was always kind of my dream job,” he said. “As the popularity of podcasts grew exponentially these last few years, I realized that what I really wanted to do was a movie podcast. I mentioned it to Wayne as I thought he’d be the perfect person to do it with. He loved the idea and we talked through ideas/brainstormed for the better part of 6-8 months before launching it fully this February.”

Lawler admitted he was hesitant for about a minute.

“The more we talked about it. the more I realized how well Will and I worked together. Like peanut butter and jelly, we just fit,” Lawler said. “So, after many months of planning, we took the plunge into the world of podcasting and now I can’t wait to record the next episode.”

The partners record the podcasts from their homes on Saturday mornings and release new ones on Wednesdays. Using google meet for video, they have separate audio software to record sound.

With so many podcasts popping up, “Cocktails and Scenes” had to stand out, said Martin.

“I think a couple of things set us apart from other movie podcasts,” he said, “more than anything we don’t take ourselves too seriously, we aren’t trying to be the next Siskal and Ebert so we just have fun with our discussions and try to keep people laughing. We really see the podcast as just two friends having a few beers and talking movies together, and we aim to give our listeners the same experience. We also don’t pigeonhole our podcast into talking about a few specific topics, already in the first 3 episodes, we’ve talked about romantic comedies, sequels, and political movies.” 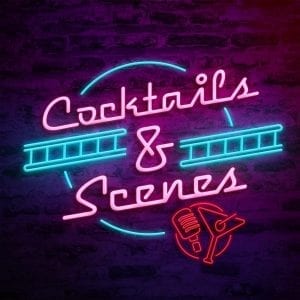 Martin fell in love with movies at an early age. The first movie he really remembers watching is “The Three Amigos.” The youngest of four children, Martin said his siblings “watched that one a lot.”

Lawler said his first movie was likely a Disney movie.

“We had all the Disney movies on video cassettes so I’m sure it was’ The Rescuers’ or ‘Fox and the Hound’,” said Lawler.

While many film buffs have a hard time choosing one favorite movie, The Cocktails and Scenes hosts readily answered that question. Martin’s is “A Few Good Men,” while Lawler said he would be revealing his in a future podcast and urged folks to tune-in to find out.

Their pick for worst flicks? Martin went with “Speed 2: Cruise Control” and Lawler said he has “a love/hate relationship with ‘Battlefield Earth.’ Worst movie, best scenes of someone running through panes of glass.”

When asked about their favorite or most repeated line from a movie, the pair showed their true colors.

“I could lie and come up with some deep quote from an artsy movie to try and build up my movie cred, but who am I kidding? My most repeated lines from movies are probably all from ‘Anchorman’,” said Martin.

The co-hosts watch many movies but have several on repeat. Martin said he has seen “The Shawshank Redemption” or “Forrest Gump” more than any other, however, simply because “of the amount the cable channels played them growing up.”

Lawler said his most repeated movie is not necessarily by choice.
“My wife is obsessed with Christmas, so I’ve seen ‘The Santa Clause’ at least 400 times,” he said.

Both consider numerous factors when dubbing a movie “good.” Martin said they take into account a combination of good acting, directing and cinematography.

“For me, the most important thing is being able to tell a good story that keeps an audience’s attention for 100-120 minutes,” he said. “I think attention spans are getting shorter and shorter, and subsequently, that’s becoming harder and harder to do.”

Lawler said a good movie is “an orchestrated effort that requires 100’s of people working together over sometimes years to tell a story that’s riveting enough to keep our attention.”

Aside from Cruise and Bond, Martin lists Jake Gyllenhaal and Charlize Theron among his favorite actors. His favorite director is David Fincher, and his favorite genre is thrillers.

Lawler said Daniel Day-Lewis and Kate Winslet top his list of favorite actors, his favorite director is Quentin Tarantino and his favorite genre is historical drama.

Martin said launching a podcast with a friend he has never met in person was “very 2020.” He said the movie industry is very different today than it was a year ago when the COVID-19 pandemic first hit. How it will affect the future of the industry will play out in time.

“Nothing would shock me at this point, but ultimately I don’t think COVID will have a long-lasting effect on the way movies are made,” Martin said. “We saw some big blockbusters delayed, but even with that new ones are still going into production every day. How they are consumed is a different conversation. Movie theaters have obviously suffered greatly, and I think even once this is hopefully over, there will still be a large crowd that won’t go back to theaters. Hopefully, I’m wrong, as I love going to the movie theater and hope they flourish once COVID ends.”

“It was already going that way before COVID even happened, you saw a lot more direct to streaming releases,” said Martin. “The conversation moving forward is going to be how the big tentpole films make the money they previously did with theater releases if this trend continues. The ‘Wonder Woman’ sequel that released on HBO Max on Christmas is going to be an interesting case study. It’s the one big ‘Popcorn’ flick that decided they weren’t gonna wait any longer and went to a streaming service. It did however make a lot of big theater companies and other people in the film industry quite upset with the studio for doing so.”

While most of “Cocktails and Scenes” focus on the scenes, the co-hosts do enjoy an adult beverage during their show. When asked about pairings with this reporter’s favorite sports movies, “Rudy” and “Major League,” Martin recommended an Irish Car Bomb and either the tequila-based “Wild Thing” or a light beer in a plastic cup, respectively. As for a pairing with the Will Ferrell comedy “Stepbrothers,” Martin could only go with the obvious: “We would have wine and pretend like we are at the ‘F$%#$# CATALINA WINE MIXER’!”

“We both like craft beers and cocktails and want to try and tie what we’re drinking with our movie topic whenever possible,” Martin said. “We start off every episode by talking about what we are drinking and have a few while we discuss movies. My personal favorite cocktail is an old-fashioned and Wayne’s is a gin martini.”

Upcoming topics include Tom Hanks this coming week and a long list for the future, including everything from Marvel to Star Wars.

“Cocktails and Scenes” has gained more of a following than the co-hosts expected after just three releases. Martin joked during the first podcast that his mother, Michelle Barthelette, would likely be their biggest fan, but other family, friends and strangers are listening.

“We appreciate any friends or family who has reached out to us and supported the podcast. We do this as a nice escape from our work lives and have said we always want to keep this loose and fun,” said Martin. “We’ve both said we would still do it even if no one listened. The fact that anyone has is just icing on the cake, but it’s always nice to be supported by your loved ones.”

“Cocktails and Scenes” can be found on any of the major podcasting platforms: Apple Podcasts, Spotify, Google Podcasts, Stitcher, etc. They are also on social at Facebook, Instagram, and Twitter.