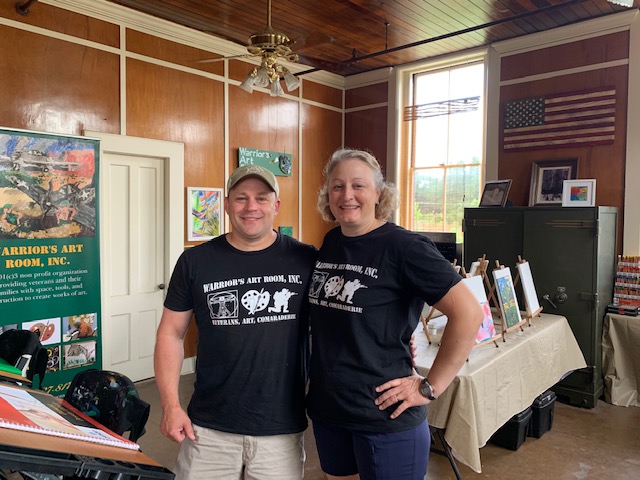 WESTFIELD-Russell residents Steve and Brenda Jones are on a mission – to provide a healing environment through art in its many forms – for veterans, active duty members of the U.S. Armed Forces, and their immediate families. 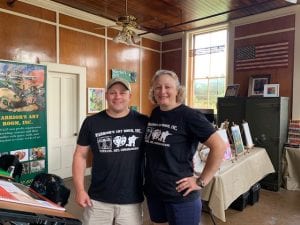 During a “soft opening” on the morning of July 8, the couple opened the doors to the new home of the Warrior’s Art Room – now located at 360 Elm St.

As you enter the stately brick building with an American flag greeting visitors, a quick right into the Warrior’s Art Room leaves one in awe of the artwork created by soldiers that dots the walls of the 14’ x 14’ studio – complete with seven individual work stations as well as a table with six easels for persons who prefer working as a group.

Steve Jones founded the Warrior’s Art Room in June of 2016 and said he is thankful for the volunteers and businesses that have made a difference in the nonprofit’s growth. Jones served in the United States Marine Corps from 2001-2009 which included one tour in Iraq.

“We rented one room inside Westfield Alliance Church on Russell Road and met one day a week,” said Jones of the early days. “In our new space that was once a whip factory, we will be open four days a week.” 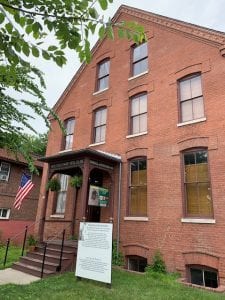 Jones noted that on alternating Fridays, he conducts workshops for incarcerated veterans at the Hampden County Correctional Center in Ludlow and the Middlesex House of Correction and Jail in Billerica.

Since mid-June, the couple and several volunteers have been cleaning the space, designing the studio, hanging artwork, and setting up the individual and group art work areas.

“We are thankful to Tanya Grater who found the space and helped us prepare the studio,” said Brenda Jones, adding Grater is a retired 20-year Air Force veteran who lives in Westfield. “We also want to thank Ora Stevens of Russell who not only helped us with the studio set up but also conducts workshops on sewing and stitching.”

The couple said that the art room is so much more than painting.

“Art also encompasses music, dance, drama, writing, poetry and journaling,” said Steve Jones. “Most people who come to the Warrior’s Art Room are not artists. We want to show people that whatever art they create has a message and it is important.”

Mike Demo of Watertown, Conn., a personal development coach for veterans, was the first person to stop by on opening day to lend his support to a friend he had served alongside in the Marines. Demo served from 2000 to 2008 and had done tours of duty in Iraq and in Afghanistan. Demo has been participating in Warrior’s Art Room workshops for close to two years. 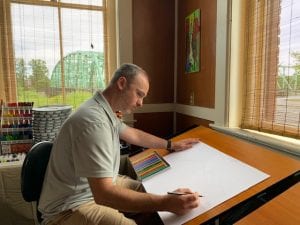 “I now have a multi-purpose area in my house where I draw,” said Demo, noting his favorite mediums include working with oils and colored pencils. “During workshops at the Warrior’s Art Room, Steve and I would commiserate because we had been in the exact same situations and needed to find a way to process what we had been through.”

Demo explained that drawing takes him out of his comfort zone.

“I have learned to take what I am feeling inside and virtually get it out on paper,” said Demo, adding the work then becomes real and it is “set out into the universe.”

“After changing my career tract from studying psychology to art therapy, I realized that painting allowed me to share feelings and emotions that I held inside and then to interpret them on a canvas.”

Jones said if he could process emotions through art, he was hopeful he could share his knowledge with other warriors.

“Ultimately, we want to open satellite studios,” said Jones, adding, “We are hopeful we will grow the Warrior’s Art Room to serve military families nationwide.”

Along the way, companies including Chartpak have been instrumental in donating tables and chairs, oils, acrylics, pastels and color pencils to ensure art supplies are always available when a person walks into the studio.

“Chartpak has wrapped their arms around us and has been so supportive,” said Brenda Jones. “We are so thankful for their support.”

In addition to Chartpak, the couple also thanked ArtWorks Westfield for their continuing support, as well as Christine Soderquist of Montgomery, who provides ongoing instruction on watercolor painting.

Artists of all mediums are encouraged to contact the couple at (413) 627-8170 or visit warriorsartroom.org if they would like to volunteer their time to conduct a workshop.

“If you are passionate about an art form and would like to share that expertise, please call us,” said Steve Jones.

ShyAnne Jones, 19, the couple’s daughter who graduated from Westfield High School in 2018, is studying studio art at Bob Jones University in Greenville, S.C., and is in the Army ROTC program at Furman University. 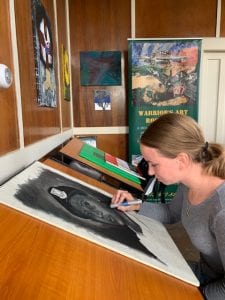 “I have been a student liaison for the Warrior’s Art Room,” said ShyAnne Jones, adding she has helped her parents work with children from military families during workshops. Also, she has lent her artistic talents to the Warrior’s Art Room social media platforms including Facebook and Instagram.

Jones added that after she serves 20 years as a military officer, she will create a Warrior’s Art Room where she establishes roots.

“I’m very proud of my father and want to help him because he is helping the community,” said Jones.

In her own right, her veteran-inspired drawings will be on sale from Aug. 17 to Sept. 20 at Mama Cakes on Elm Street. Also, Jones will be a featured artist during the Aug. 17 ArtWalk in downtown Westfield from 11 a.m. – 2 p.m.

For Steve and Brenda Jones, the new studio location is part of the evolution of the nonprofit that will soar to greater heights in the coming years.

“Our goal is to have a gallery that not only will provide a separate space for individuals and their families to create art, but also to provide a space that will allow the public to see and purchase artwork,” said Steve Jones.

The name of the future gallery has already been determined – the Staff Sgt. James Wheeler Memorial Art Gallery – in honor of a good friend who passed much too early.