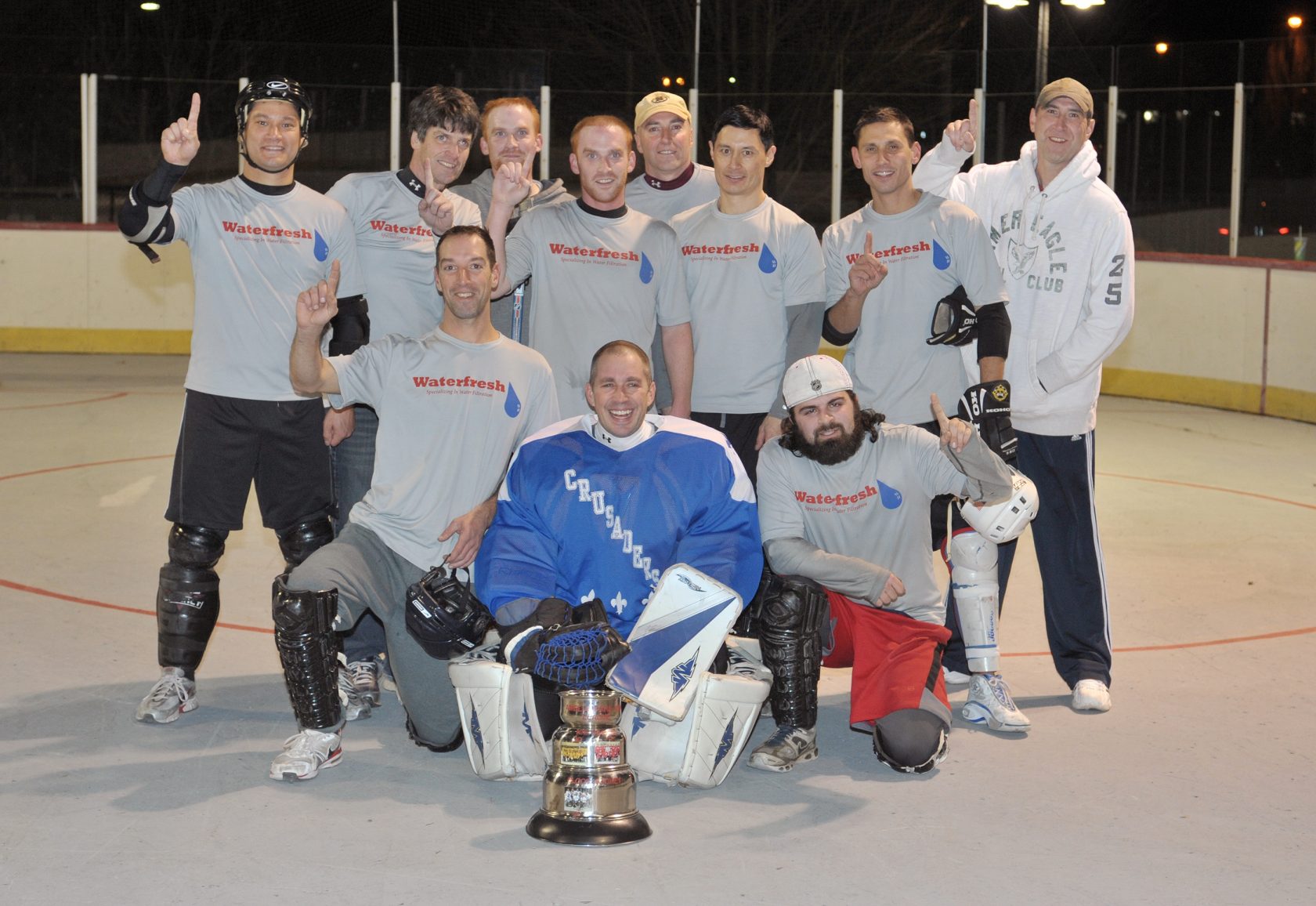 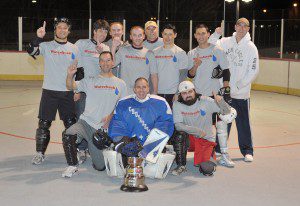 WESTFIELD – Ten years ago, Westfield High School’s Craig Centracchio hoisted the Division II state hockey championship trophy alongside his fellow Bomber teammates. On Wednesday night, he claimed a prize that had a bit of a different lean to it.
Centracchio scored two first period goals to help lead Waterfresh to a 3-0 clincher over TG Home Improvement in the second game of a best-of-3 dek, or floor, hockey finals at Amelia Park’s outdoor arena. The prize was a custom-made metal cup that “leans” to one side, and is handed down from one champ to the next.
Joe Centracchio scored a goal, and goalie Dave Gawron earned a shutout in net.
“It’s just something to do with friends, family, cousins,” said Craig Centracchio, whose team took a 1-0 series lead with a 3-2 overtime win over TG on Monday night. Centracchio was a member of the WHS hockey team in the early 2000s that went on to win consecutive Western Massachusetts titles, and a state championship.
Waterfresh, which is comprised of players from Westfield, Springfield, and Suffield (Conn.), knocked off the local two-time defending dek hockey champions, King Ward, to reach the championship round. Pretty stunning for a first-year team.
Waterfresh came together after a five-year hiatus from the game, but got stronger as the weather turned nastier. And as the leaves fell, so did their toughest competition.
Prior to upsetting King Ward, Waterfresh spoiled TG’s perfect record on the regular season’s final day. In their previous meeting, TG nailed a shorthanded Waterfresh team, 7-1. But on Wednesday, Waterfresh brought their full squad and doused the competition.
The true victor in this week’s dek hockey finals is Amelia Park, which has seen a rise in the sport growing from just four teams two years ago to nine this past season.
According to Amelia Park executive director Carole Appleton, TG goalie Scott Madrid and Patrick Berry (the president of The Westfield News Group), were instrumental in forming the floor hockey league.
Over the course of the last year, the league morphed into two sessions on Wednesday evenings, and was played on the 65-by-175-foot rink unless weather conditions became unfavorable, which this season was a bit too much for some.
“Mother Nature has been cruel to us,” Appleton said. “That’s one reason this season has gone so long.”
That is expected to change the next time around as Amelia Park officials have been meeting with an architect to discuss the potential for a roof over the outdoor rink.
“I know everybody will be super excited about it,” Appleton said, assuming the park adopts those plans.
Still, questions must be answered in terms of specifics such as adding bleachers. And financing might be more of an immediate concern, the park’s executive director said.
Whether or not the park moves forward on funding a roof for the outdoor rink, the league is expected to adopt a 20-week schedule for 2013 beginning in May and ending in September, with playoffs ending a month later.
Said Appleton of the league’s rise: “We have added an element of atmosphere.”