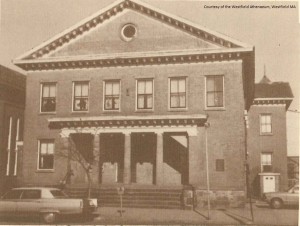 by JEANETTE FLECK
WSU Intern
The Old Town Hall
In 1838, a few years after William Bates built his house, Westfield built its “Old Town Hall” nearby on Broad Street. This Greek-Revival building is about the same age as the house which has become the Athenaeum, but pre-dates most other downtown buildings, including the Old Post Office and the next-door First Congregational Church. The town hall housed all of the various governmental departments, including the police department and (between 1855 and 1868), the high school.
In 1920, Westfield re-incorporated as a city, and so the building was known instead as city hall (though both town and city are used to describe Westfield even today). Eventually, after Westfield Normal School abandoned their Court Street location, the city officials decided to move into that slightly larger building, leaving the Town/City Hall on Broad Street as the empty one. It stood vacant, at least on paper, for the next five years, until about 1965, when the “Former City Hall School” opened there. That school only stayed for about five years.
In about 1972, The Westfield Area Child Guidance Center moved in, under lease from the First Congregational Church, which had acquired the building since the city officials moved out. The Center was a nonprofit mental health institution which had been serving and would continue to serve individuals in Western Massachusetts for the next forty years and upward. Around 1973, the organization’s name changed to the Westfield Area Mental Health Clinic, to reflect their recently established services for adults. Now called the Carson Center for Human Services, after Marguerite Carson, a previous director, this same organization is still headquartered at 20 Broad Street today.
The Carson Center just celebrated its 50th anniversary last year. They offer a wide variety of services for all ages, including the Kamp for Kids, the Urban Youth Collaborative Program, and the Center for Adults and Families. For more information, see their website, at www.carsoncenter.org.