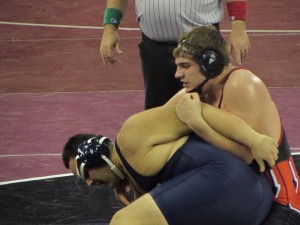 WESTFIELD – Two Westfield High School wrestlers came up big at the Massachusetts All-States Wrestling Tournament at the Tsongas Center in Lowell, last weekend, and are poised to make some noise against some of New England’s best.
Westfield High wrestling coach Bob Coe said he was extremely pleased his team’s performance at the All-States wrestling tournament. The Bombers ranked with the best of them – 17th out of more than 100 teams.
Coe is confident that his players can place at the New England Tournament in Providence, Rhode Island this weekend.
“This is a culmination of a year of hard work,” he said. “This is it.”
Westfield’s 285-pound junior, Austin Shrewsbury placed second. He was dominant over his opponent in the final, blanketing Kamren Anderson. However, due to a technical violation and a break away by Anderson, Shrewsbury fell to him for a 2-1 loss.
The Bombers’ 185 pound senior, Dominic Liquori took seventh. 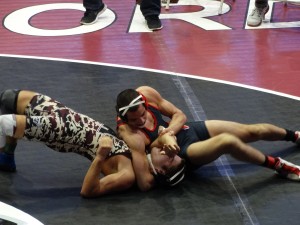 According to Coe, this is the first time in more than 20 years where they had anyone qualify, even including state champions.
“It’s kind of a big deal,” he said.
Shrewsbury has expressed his excitement over he and his teammate placing in All States, and receiving the opportunity to place for New Englands as well. The importance of them being the first wrestlers in a long time to get this chance is not lost on them.
About his biggest challenge looking forward, Shrewsbury is looking forward to going up against Jesse Webb, the top ranked wrestler in Vermont from Mount Anthony Union High School.