OCALA, FLORIDA – No matter what win-loss record Westfield compiled in the Babe Ruth Baseball World Series, the Whip City’s 14-Year-Old All-Stars would be looked upon as #1 by family, friends, and many members of the Whip City community.
Yesterday, Westfield finally earned win No. 1, proving it did belong in the World Series.
Westfield received solid pitching performances from Mitchell Longley and Nate Bonini, and the Whip City’s group of 14-year-old ball players soundly defeated Southeast Lexington (Ky.), 5-1.
“It was a good win – obviously something that we needed desperately,” Westfield manager John Bonini said.”We were able to come out and compete. That did not surprise us.”
Lexington struck first.
In the bottom of the first inning, Jose Gonzalez singled and stole second base to lead off things for Lexington. John Stinetorf walked. Brody Sellers singled to load the bases. Evan Hall hit an RBI single.
Longley got his team out of a jam – his defense made a huge assist as well – forcing No. 5 batter Hagen Ouellette to hit into a double play. Longley then forced Cameron Workman into a pop fly to end the threat.
Westfield (1-3) bounced back. 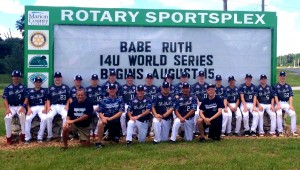 The Westfield Babe Ruth Baseball 14-Year-Old team poses in front of the Sportsplex sign at the World Series in Ocala, Florida. (Submitted photo)

Aidan Dunn and Andrew Tobias drew one-out walks for Westfield in the third. A single from Kyle Roberts loaded the bases. A fielder’s choice on a ball hit from Matt Masciadrelli to the left side of the infield resulted in the tying run.
Westfield kept the pressure on.
In the top of the fourth, Jack Yvon hit a lead-off single to get things started. Tyler Delgado followed with an RBI triple to deep center field. Nathan Boucher reached on a fielder’s choice and eventually came around to score on a steal of home plate. The Whip City led 3-1.
In the fifth, Aidan Dunn walked, advanced to second base on Aidan Dunn’s sacrifice, moved to third on a wild pitch, and scored on Masciadrelli’s sac-fly.
Westfield’s pitching staff managed to shut down Lexington all game long.
Longley and Bonini were stellar in their team’s final game. Bonini allowed two hits, no walks, no runs, and struck out four batters in three innings of relief. Longley scattered five hits over four innings. He allowed just one run.
“(Westfield) could have easily packed it up and gone home,” manager Bonini said, “but these kids played their hearts out from the first pitch to the last.”
“To finish, unofficially, sixth out of all the Babe Ruth 14-year-old teams in the nation … be able to win the states, and have a walk-off hit to win the regionals in front of a home crowd, we’re proud of all we accomplished.”
A parade for the 14- and 13-Year-Old All-Star teams will be held Sunday at 1 p.m., beginning near the McDonald’s on North Elm Street and finishing at the city green, where players, coaches, league and city officials will celebrate their accomplishments.