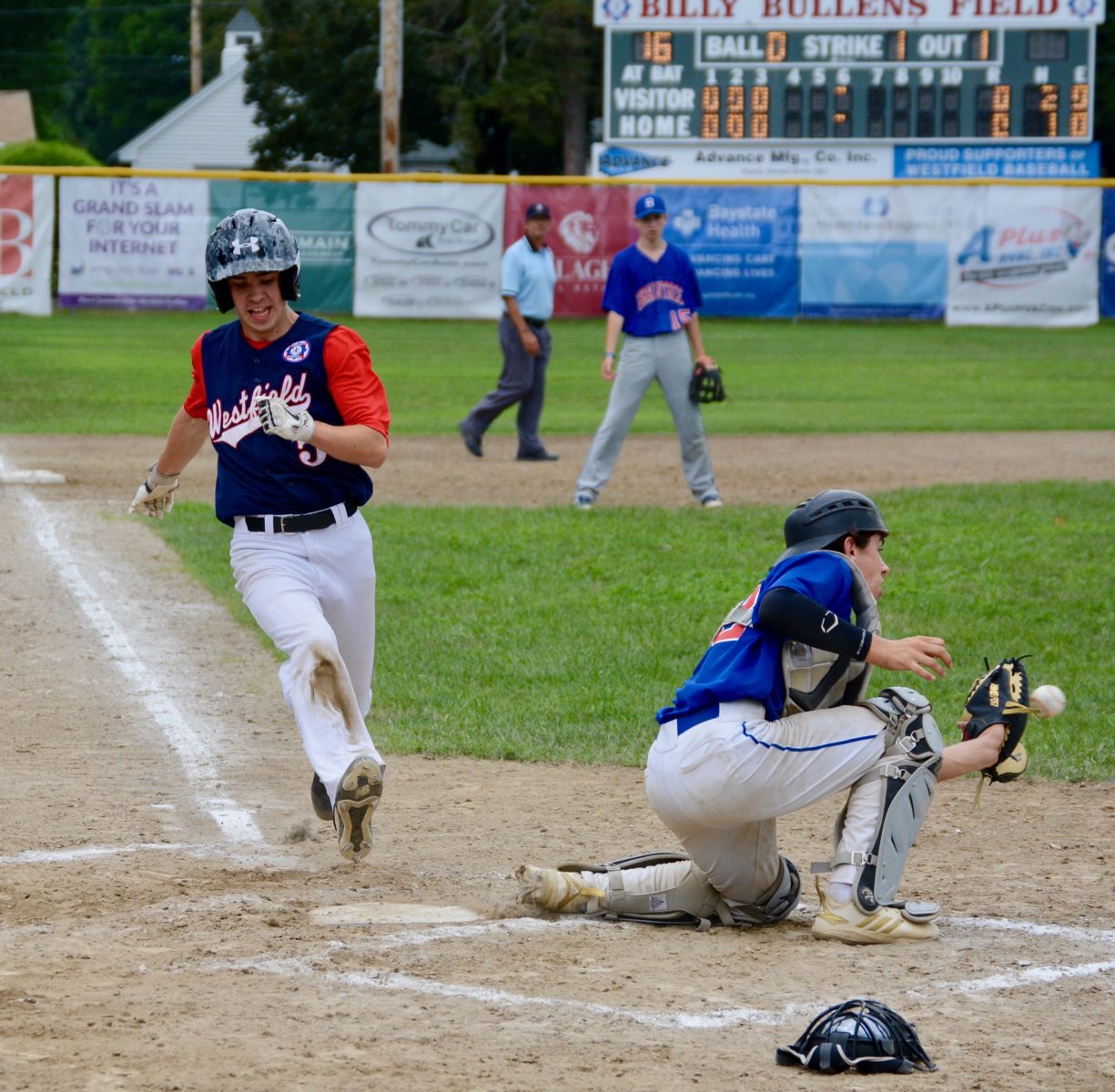 WESTFIELD – It was fitting that a few rain drops fell from the sky as the Westfield Babe Ruth Baseball 13-15 Year-Old All-Stars wrapped up its game against Braintree early Monday afternoon at Bullens Field.
For several local ballplayers, it was a tearful goodbye to the league after being ousted by Braintree 7-3 in the double-elimination portion of the New England Regionals. Westfield advanced to pool play with a record of 1-2.
“I’m proud of them,” said a teary-eyed Westfield 15-Year-Old All-Stars manager Jim Cloutier, whose team kept grinding and battling until the very end. “They’re great kids. A lot of them I’ve had for a long time.” 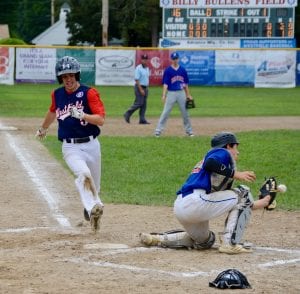 It might have been a gloomy, overcast day, but Westfield’s offense and defense shined early.
Braintree easily could have scored the first run in the opening innings of the game when it attempted to score on a wild pitch, but a fantastic bang-bang play on a throw by Westfield catcher Jared Noel to pitcher Joey Calderella and subsequent tag on the knee of the base runner just inches from home plate resulted in an out.
The play appeared to spark Westfield as the host city built a 2-0 lead with two runs in the top of the fourth inning.
Dylan King manufactured the first run, hitting a base knock, stealing second base, advancing to third on a sac-fly and scoring on Dylan Arooth’s single. Troy Hevey followed with a RBI double.
Braintree bounced back in a big, big way.
In the bottom half of the fourth, Josh Morelli belted a run-scoring double to cut the lead in half. In the fifth, Erwin Huang smacked a game-tying line drive single up the middle. Braintree went ahead 3-2 with a sac-fly RBI. An error made it 4-2. Morelli smashed the clincher, a bases-clearing, three-run triple – arguably the best hit of the entire tournament – that soared all the way to the left field fence to make it 7-2.
Hevey accounted for the game’s final run in the sixth inning, hitting a single out along the right field line.
“We had some timely hits early in the game,” Cloutier said. “We just didn’t string enough hits together to put us over the top.”
Braintree advances to play Norwalk (Conn.) in the semifinals Tuesday at Bullens Field at 4:30.
“We’re pulling for them now because they’re from Massachusetts,” Cloutier said. “Going forward, we hope they roll.”
The other semifinal will feature Keene (N.H.) and Greater Portland (Maine), who advanced with a 4-1 win over North Providence-Smithfield (Rhode Island) Monday. First pitch for Tuesday’s second semifinal is at 7.
“Every team here that’s in this tournament has two or three stud pitchers. Everybody can hit. It’s good for our program to see that,” Cloutier said. “You’ve got to keep practicing. You’ve got to keep battling. You’ve got to get better in order to face that type of pitching, get hits off of that and do the little things – work hard in the summer (and) in the offseason. We’ve got a ways to go.”
Westfield’s All-Star manager said his hope is that this experience will bear some fruit a year or two down the road.
Said Cloutier: “Two years from now, they might be seniors in high school and maybe they will do something, maybe they will win something.”