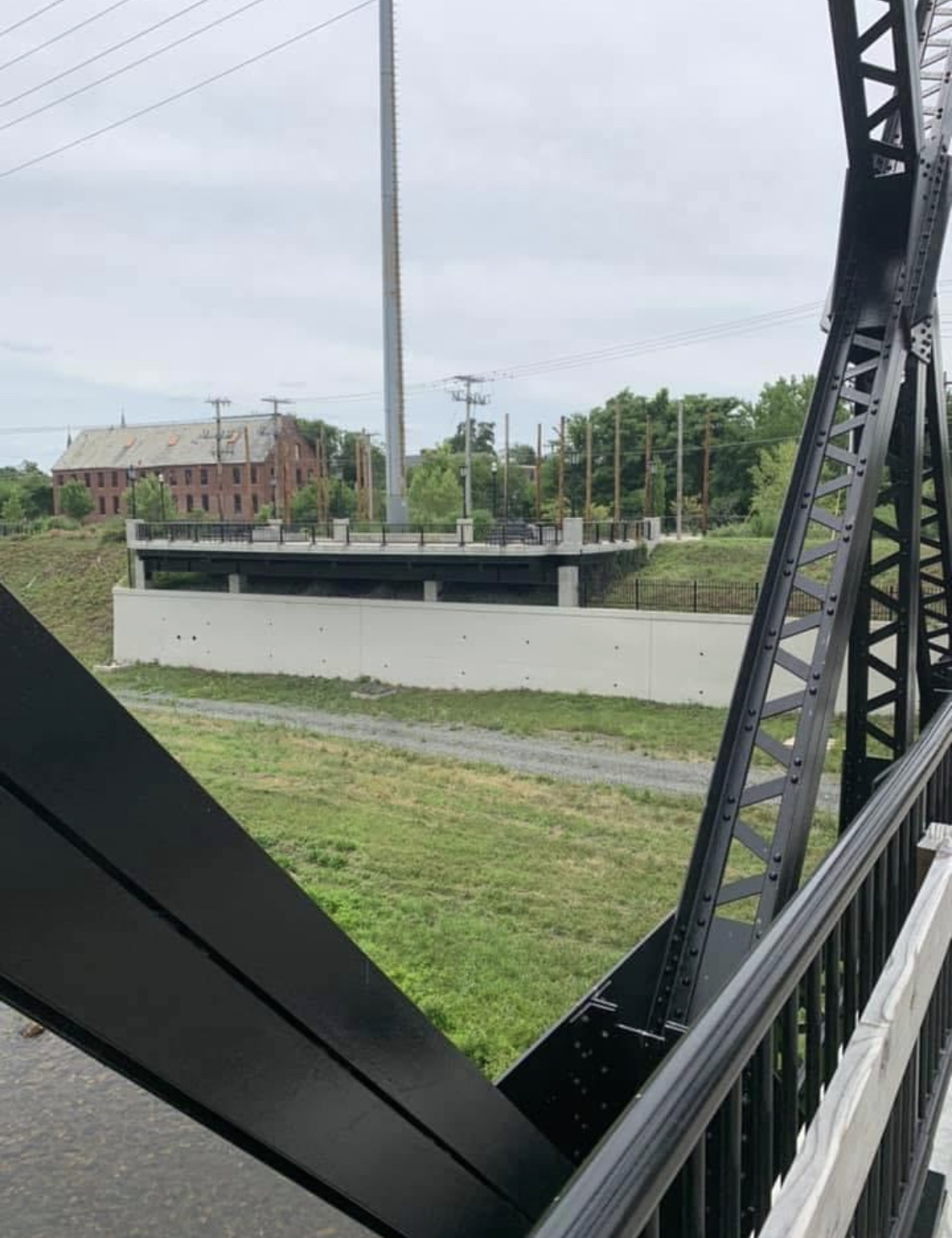 WESTFIELD-It takes a village to undertake larger-than-life endeavors, and the next mural in the city will bring several organizations together with shared missions and visions.

“ArtWorks of Westfield’s vision for improving the beauty and accessibility of our outdoor spaces aligns well with the Friends of the Columbia Greenway Rail Trail which is ‘Blazing new trails for a bicycle and pedestrian friendly Westfield,” said Carmel T. Steger, who serves as the Friends’ board chair.

Steger noted that the art project by the green bridges and esplanade will be created at “just the time” that the central and final section of the Columbia Greenway Rail Trail reaches completion. 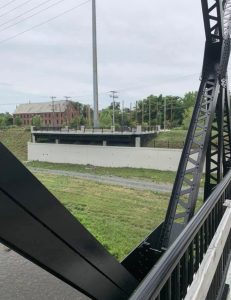 “Soon, access to these mural treasures along the bike trail will really offer the link to everyone of art and recreation in our pretty downtown corridor,” said Steger.

Bill Westerlind, ArtWorks president, noted the organization applied to the Westfield Cultural Council in late 2020 for a grant to partially fund the project and in early 2021 were awarded the grant.

“We are so grateful to the Westfield Cultural Council for their generosity and vision of how public cultural experiences are so important to the vitality of the community,” said Westerlind. “The balance of the amount budgeted to complete the project is being raised through a GoFundMe page, donations and gifts, and local business sponsorships.”

All funds donated for the mural project will go into supplies – paints, brushes, tarps and the like as well as upkeep.

“We periodically circle back to all our mural projects to address any maintenance issues or necessary touch-ups,” said Westerlind. “Any funds remaining after those expenses will be used for future community mural projects.”

“We have teamed up with the Mural Club at the Boys and Girls Club of Greater Westfield to work on mural design and painting,” said Westerlind. “We have also worked closely with the Friends of the Columbia Greenway Rail Trail as work progresses to connect the existing rail trail to the Westfield River Esplanade around mid-year.” 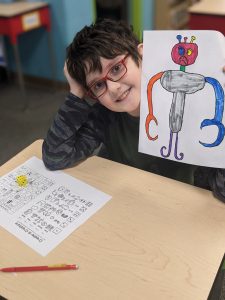 Landon F. is among the kids at the Boys and Girls Club of Greater Westfield who are using drawing games to design creatures for a mural project. (JOCELYN CARELLA-ERICKSON PHOTO)

“I draw my inspiration from researching what interests me,” said Kinne, adding, “I currently am researching the different environments and relative fauna and flora of Westfield specifically and that will help create the world in which these children can create characters.” 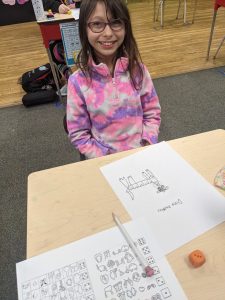 Kids at the Boys and Girls Club of Greater Westfield – including Alexis W. – are creating unique creatures for a new mural in the city. (JOCELYN CARELLA-ERICKSON PHOTO)

“I am also so excited to work with Jocelyn Carella-Erickson of the Boys and Girls Club of Greater Westfield,” said Kinne, adding, “I am honored to make another mural with and for the community.”

Carella-Erickson, who serves as visual arts director at the Boys and Girls Club, has been working with children to design their own fantasy creatures to be incorporated into the mural project.

“My hope is to have any and all interested Boys and Girls Club members continue working on creature designs and during our summer program, to bring small groups of kids at a time on location to start enlarging the fantasy creatures that they and their peers designed,” said Carella-Erickson. “Some children have expressed more interest in being a part of the ‘behind the scenes’ design process and are excited at the idea of having their peers work with creative professionals to bring their designs to life, while others are more interested in helping with the actual painting process.” 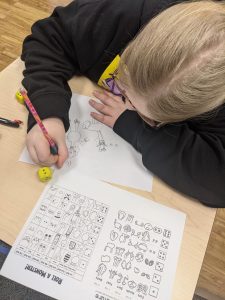 Chiba explained that the theme for the new mural came about when ArtWorks considered the “huge space.” 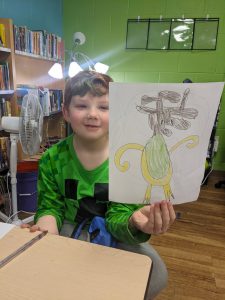 Kids at the Boys and Girls Club of Greater Westfield – including Quinn H. – have been drawing interesting figures for an upcoming city mural project. (JOCELYN CARELLA-ERICKSON PHOTO)

“We want to have fun and kids will be the focus of this mural,” said Chiba. “Westfield Is Fantastic celebrates our city and the playful and youthful nature of public art. Combining fantasy creatures and the natural world with professional artwork and children’s artwork will prove to be a spectacular marriage of concepts.”

In preparation for the painting project, a clean-up day is slated April 24 in the river walk area.

“We need to clean up any debris and possible garbage so that the area can be painted in late May,” said Chiba. “Kids will be trekking down there and we need to be sure it’s safe. Also, this area is accessed by folks wanting to fish and hike. It’s a great thing to do for the community.”

Chiba added that area residents wishing to help on April 24 from 1-4 p.m. are asked to bring garbage bags and gloves, and ArtWorks members will haul away the garbage.

“Folks can park near the address of 28 Sackett Dr., and walk behind the Department of Public Works (DPW) to the park,” said Chiba. “We will assemble by the mural. The mural is under the black bridge. You can access it by walking down the earthen ramp by the DPW.”

Chiba noted that area residents helping on clean-up day will be given “first public access to help paint the mural.”

Westerlind said that ArtWorks members have always been drawn to the north side of the city and the gigantic concrete wall under the Westfield River Esplanade has always captivated their attention.

“The large mural canvas and the natural beauty of the Westfield River waterfront combined with the extensive but grossly underutilized system of small parks and the Westfield River Walk was very attractive,” said Westerlind. “Add the excitement of the completion of the Columbia Greenway Rail Trail at the esplanade and we were hooked. We are excited about activating that entire area each and every weekend.”

For more information on ArtWorks, donation and sponsorship options, and the mural project, visit http://www.artworkswestfield.com. Also, ArtWorks members encourage area residents to join the Facebook group – Westfield Is Fantastic – for updates and calls to action.

“It is important for all donors, sponsors and underwriters to understand that ArtWorks of Westfield has purposefully kept our operating expenses very lean so the vast majority of the funds we raise get plowed back into the community in the form of free, accessible and diverse community art and cultural experiences,” said Westerlind.

“The mission of public art and place making is to enliven a community and to activate a space that is not used,” said Chiba, adding the mural will be seen by drivers and explorers of the rail trail.

“As the trail expands, more folks will be able to see this mural,” said Chiba. “It is a gigantic void of a space and a perfect canvas for our community. We encourage folks to see the space for themselves and envision the beauty that will unfold.”