WESTFIELD-As the popularity of pickleball continues to grow in the city, Westfield Pickleball was recently the beneficiary of donated equipment from the World Pickleball Federation.

“We officially received 24 paddles and 36 pickleballs on Jan. 2 from the World Pickleball Federation (WPF),” said Lynn Barszcz of Westfield, an avid player for four years at the Municipal Playground. 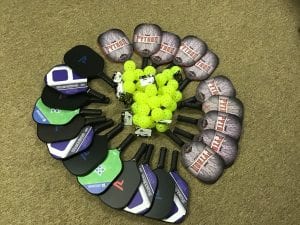 Westfield Pickleball recently was gifted 24 paddles and 36 balls as part of a collaborative initiative underway globally with the World Pickleball Federation and manufacturers of pickleball equipment. (LYNN BARSZCZ PHOTO)

The WPF’s vision is to ignite the global excitement, inclusive nature and lifetime benefits of pickleball, according to its website – worldpickleballfederation.org. World Pickleball Day was created to celebrate the game worldwide as well as expose the game to new prospect players and grow the number of players worldwide.

“Someone sent photos of our players to the WPF, explained what we’ve done in the past, and applied for the equipment,” said Barszcz.

During a winter vacation in Florida several years ago, Barszcz had tried pickleball and was struck how welcoming everyone was and how people wanted to show her how to play.

Barszcz said area residents will also find that welcoming spirit on the courts at Municipal Playground on Greylock Street.

Manufacturers including Paddletek, Franklin Pickleball, Onix, Selkirk Sport, Gamma Sports, Engage Pickleball, Dreamland and TMPR Sports donated equipment for grassroots usage to help grow the awareness and adoption of pickleball as a game for all and for life, noted Barszcz.

On the Westfield Pickleball Facebook page, organizers noted “We are thrilled about having the equipment to be able to spread the word about this wonderful game that is suitable for everyone, young or old. Being helped by the World Pickleball Federation means that Westfield Pickleball can continue its grassroots efforts in promoting this game.” 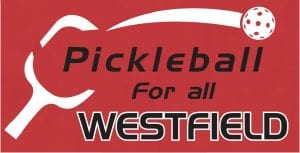 Pickleball, which combines the elements of tennis, table tennis and badminton, was first played in 1965 on Bainbridge Island in Washington. Two or four players use solid paddles made of wood or composite materials to hit a perforated polymer ball with 26 to 40 round holes, over a net, according to Wikipedia.

Barszcz said pickleball has been offered at the YMCA of Greater Westfield for several years and was introduced citywide in 2017.

“We now have six dedicated pickleball courts and one handicap accessible court for tennis and pickleball at Municipal Playground,” said Barszcz, noting the area is referred to as “Pickle Park.”

“We use Facebook to keep everyone informed on our news, and we also use a Team Reach app for pickleball participants to post information including calendar events,” she said.

A website – westfieldpickleball.com – is currently under construction, according to Barszcz. 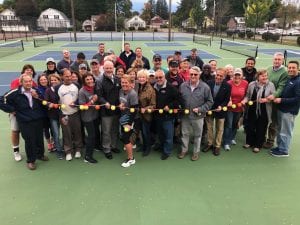 City officials joined with avid pickleball players during the dedication of the courts at the Municipal Playground on Oct. 10, 2019. (SUBMITTED PHOTO)

Barszcz added that in Western Massachusetts, the Westfield courts are considered a “shining star” among pickleball players.

“Most days – even in winter – you will see individuals playing pickleball,” said Barszcz, adding, “There are players from 18-years-old to 80.”

Just as Barszcz was welcomed years ago on a pickleball court in Florida, she said the same rings true in the city.

“Pickleball is a unique sport and most of the time it is open play so anyone can show up with the expectation of playing,” she said, noting there is no requirement to reserve a court.

“You will find people are very welcoming, are easy to talk with, and will explain the rules of the game,” said Barszcz, noting one of the many benefits of playing pickleball is making new friends.

“I have found the camaraderie has been amazing,” said Barszcz, adding, “Pickleball is an easy sport to learn, is relatively low cost, convenient, and you can stay for a half hour or a couple of hours. We encourage everyone to check our courts out since we want to grow our program here.”

Shannon Small, a pickleball player for three years, shared a similar sentiment on what drew her to the sport.

“Pickleball is fun and welcoming to all,” said Small, adding, “There is a great group of people who enjoy the sport. I have never enjoyed a sport as much as I do pickleball.” 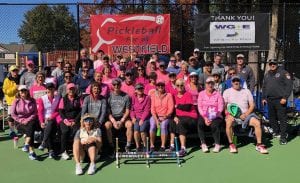 A pickleball tournament, hosted by Westfield Pickleball, was conducted at the Municipal Playground on Oct. 5, 2019, to raise awareness of breast cancer. (SUBMITTED PHOTO)

Barszcz noted that extra paddles and balls are available for persons wishing to try the sport before they purchase their own equipment.

“We were also running clinics before the COVID pandemic impacted our play,” said Barszcz, adding that she has seen a growth in the participants who are turning out to play.

“If each one of our players introduces the game to a few friends, just imagine the multiplying effect and growth of the sport just in our community,” she added.

“There were leagues in Westfield last year and there are plans to have more this spring, summer and fall,” said Small. “I would encourage people to check out the sport because it is fun, fun, fun and welcoming to anyone.”

Small said while there can be competition among some pickleball players, she enjoys the “great and diverse group” who turn out on the pickleball courts.

“The competition is great and the laughs and fun are even better,” said Small.

On a related note, the Westfield Parks and Recreation Department has been offering programs on pickleball for all ages. For details on this year’s programming and a digital copy of its brochure, visit cityofwestfield.org and click on the department’s link.

Also, prior to the COVID-19 pandemic, the Westfield YMCA had been offering pickleball programs since 2016.

“Unfortunately, due to COVID restrictions, we currently cannot offer pickleball but look forward to the day it returns back to the Westfield Y,” said Cindy Agan, health and wellness director.