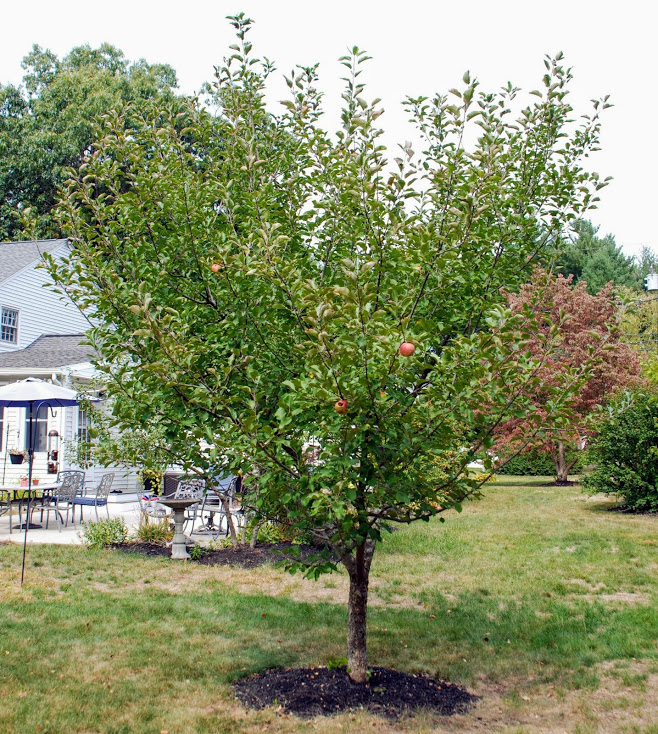 WESTFIELD-For more than 40 years, two Westfield Seek-No-Further apple trees have stood the test of time on the grounds of Stanley Park.

The dwarf trees – then just saplings – were a gift by lifelong resident Henry Warchol, now 94, during the nation’s bicentennial celebration – since he wanted to make a small contribution and knew the trees “would flourish” in that setting. 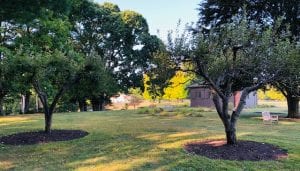 “I also have at least six of those apple trees still on my property,” said Warchol, who is an avid gardener and spent his career as a toolmaker. “The apples were always delicious.”

Warchol chuckled over the phone adding, “There was no reason to seek any other apple to plant than the Westfield Seek-No-Further, especially since it was tied to the city’s history.” 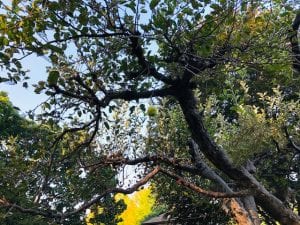 One green apple can be seen on the Westfield Seek-No-Further tree at Stanley Park. (ROBERT MCKEAN PHOTO)

A recent social media post on the Historic Westfield Massachusetts Facebook page brought the apple to light and for many, a flurry of interest soon ensued.

Joe Camilleri and his wife, Myra, and children Milana and Chloe, are among the city residents who have nurtured one of these trees for years.

From that initial internet search, Camilleri found the Walden Heights Nursery and Orchard in Walden, Vt., that sold the tree and ordered one online. Since that time, Camilleri said the tree has done well even though he was a bit concerned about the sandy soil it was planted in. 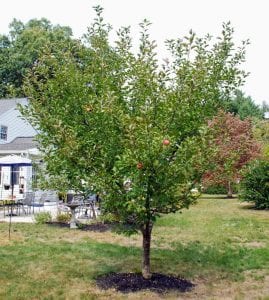 The Camilleri family of Westfield has a Westfield Seek-No-Further apple tree in their backyard. (JOE CAMILLERI PHOTO)

While the tree hasn’t produced an abundance of apples over the years, Camilleri is convinced that will change in the future.

“The tree should start producing apples in a few more years,” he said. “The apples we have had have been delicious and some of the best apples I’ve ever had.”

Kelsey Socha, head of adult services at the Westfield Athenaeum, checked the archives and found that the Westfield Seek-No-Further “seems to have originated in or near Westfield in 1796 or sooner.”

Socha found a variety of anecdotal information that included the Westfield Seek-No-Further was an old favorite dessert apple because of its tart, tender, rich pearmain flavor.

Andrew Jackson Downing, in his book, “The Fruits and Fruit Trees of America,” described the Westfield Seek-No-Further as “a first-rate fruit.”

As the popularity of the apple spread across the country, it was noted in 1846 by the New York State Agricultural Society on the selection of the best varieties of apples for cultivation in New York that the Westfield Seek-No-Further was “truly an excellent apple.”

The society added in its report that the apple variety “loves a warm, free soil; is hardy, vigorous and prolific. In flavor, it is excelled by few apples whatever for all household purposes.”

For Sandy Records of Westfield, she too was drawn several years ago to the Westfield Seek-No-Further apple.

“I purchased two from FEDCO in Clinton, Maine, as gifts – one for my sister Diana who lives in Ashford, Conn., and the other is at a house in Chesterfield where my daughter used to live,” said Records, noting her purchases were four to five years ago.

“I wanted to give an everlasting gift and I researched local heirloom apples thinking they would likely thrive in this area,” said Records. “It is reputed to be very flavorful with a versatile texture, late in the season, keeps well. Also, the apples are so pretty, red and rose and green and yellow and brown – not all red like a Mac.”

Records added that her sister’s tree, named “Abigail,” is about 15 feet tall but has not yet borne fruit.

As for Warchol, he hopes one day soon he will be able to stop by Stanley Park to see the trees again.

“I used to go to Stanley Park quite frequently to check on the trees,” said Warchol, adding, “I hope the bees are pollinating the trees.”