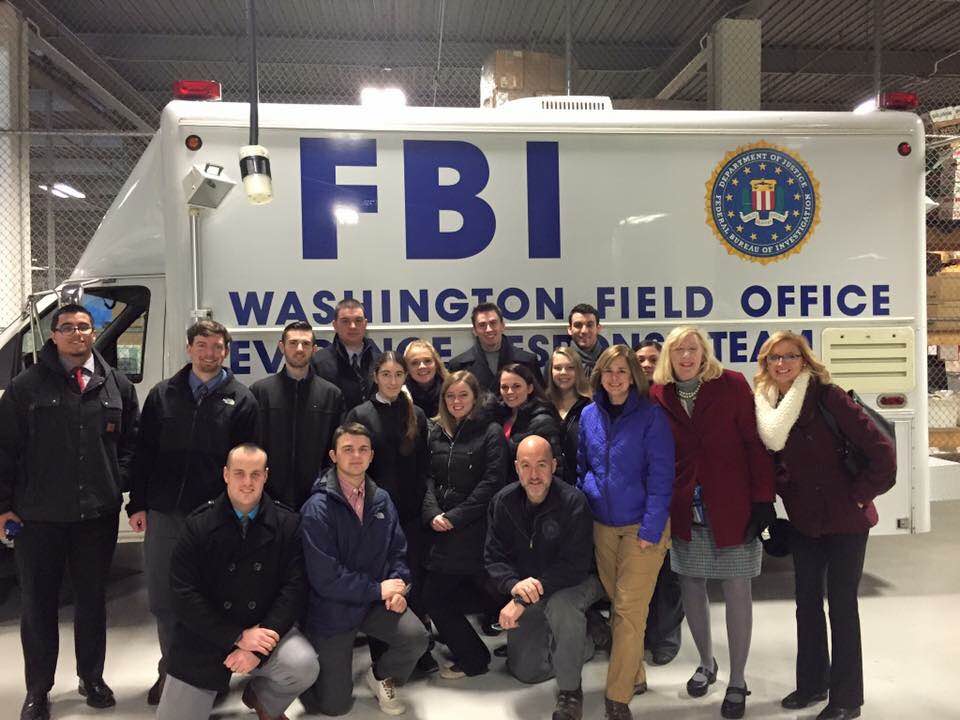 WESTFIELD – Fifteen Westfield State University students travelled to Washington D.C. during winter break as part of the course “Jurisprudence and Federal Law Enforcement Agencies in a Global World.” The course was led by Dr. Alice Perry, assistant professor of criminal justice.
This is the second consecutive year that Perry has held the “Jurisprudence” J-term course. The course focuses on the federal constitutional application of the fourth, fifth, and sixth amendments, the operation of federal law enforcement agencies through a global lens, and the federal law enforcement’s structure, interagency relationships, and the role on the national and international stage.
Another course objective was to examine the ways federal law enforcement has changed post 9/11. Perry, who worked as a prosecutor for 20 years before teaching at Westfield State, witnessed these changes first-hand.
“As a prosecutor, I saw the changes in the relationship between the state and local and federal law enforcement agencies, there was a dawning realization that we really did have to work together and this had to happen and it did,” Perry said.
Westfield State University has a long-standing reputation for excellence in curriculum and quality of graduates in the work force. Alumni of the university have a large presence in federal agencies including the Federal Bureau of Investigation (FBI), the Drug Enforcement Administration (DEA), the Bureau of Alcohol, Tobacco, Firearms, and Explosives (ATF), the Diplomatic Service, and the Secret Service.
While in D.C., Perry brought her students to visit several different federal agencies including the FBI, Interpol, and the U.S. Marshal Service with the hopes of introducing them to potential career opportunities.
Student Sydney Dargie ’17 of Wilbraham, Mass., said she most enjoyed visiting the FBI where she and other students were able to learn about the agency from a Westfield State alumnus, Agent Tom O’Connor and his wife Agent Jean O’Connor.
“I learned so much about the FBI from both of them,” Dargie said. “We got to see and experience a lot of things that most don’t get to do. It was also great to see a Westfield State alumnus because it just shows that with hard work and dedication that could be me someday.”
Student Luke Visconti ’16 of Southwick, Mass. agreed that the visit to the FBI headquarters was a course highlight.
“Our time with the FBI was the longest of all the other agencies,” Visconti said. “We were brought to an “off-site” shop where their operations are planned, prepared for, and assessed. The entire experience was fascinating to me and I gained even more interest and desire to work for the FBI.”
Perry said she was most impressed with her students’ participating in the different site visits, specifically a lengthy interaction with the director of the DEA Chuck Rosenberg.
“Our criminal justice students rose to the challenge and asked thoughtful, trenchant questions,” Perry said. “The director was impressed and it was a moment of great pride for me as a professor.”
“This course made me excited to start my career in law enforcement,” Dargie said. “There are so many opportunities and positions out there. I have so many options and this course helped me realize I can achieve any goals I set for myself.”
Visconti ’16 of Southwick, Mass. said after completing the course, he can see himself working in D.C. in the near future.
“I can easily see myself working in Washington D.C. for a federal agency where I can have meaning to what I do and a real effect on our nation’s priorities,” Visconti said.