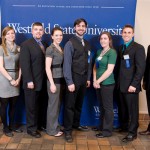 WESTFIELD – Seven Westfield State University (WSU) students were recognized for exhibiting leadership skills both in their own communities and on campus. Each student was recognized with the President’s Award for Excellence in Leadership in a ceremony held on Saturday, December 2nd in Scanlon Banquet Hall.
To be eligible for the award, students can be nominated by a professor, but all must complete an application process including an essay about the community service they have done and how it has impacted their future goals.
“Westfield State is pleased to honor students with such an outstanding level of determination,” said university President Evan Dobelle. “We commend these students who dedicate their free time to helping others both at Westfield State and beyond which all of us can appreciate.”
The seven students selected this year are all seniors with an average GPA of 3.72. The President’s Award of Excellence in Leadership was created in 2007 and can be awarded to any eligible student. A committee of 12 faculty and peers review all applications.
Recipients of this year’s award are:
Psychology and Ethnic and Gender Studies double major Katelyn Anderstrom is the president of the Psychology Club and through that organization, has been an active participant in the Autism Speaks, Alzheimer’s, and Out of the Darkness suicide prevention walks each year. Anderstrom is a member of STRIVE (Students Today Respecting Individuals of Various Experiences) and the Student Honors Advisory Council among other on campus clubs.
Elementary Education and Liberal Studies major Lynn Arsenault is president of the Student National Education Association (SNEA) and has been a part of numerous service conferences working with nationwide volunteers to renovate underprivileged schools across the country. Arsenault also mentors underclass education students and volunteers weekly to read to children at the Westfield Family Center. Arsenault’s experiences volunteering have inspired her to join the Peace Corp after graduation next May. “I have been humbled by the realization of how much suffering exists in the world and I’ve realized my ability to bring change through my actions,” Arsenault said.
Brian Cipoletta, Psychology major, serves as the co- director and section leader of the Night Owls, an a capella group on campus, and president of Musical Theatre Guild (MTG). In addition, Cipoletta is a peer mentor and campus tour guide. Cipoletta said that the best leaders are those willing to compromise. “Sometimes, the best thing a leader can do for an organization or a project is to put their own personal preferences or objectives aside for the good of the organization,” Cipoletta said.
Senior Mathematics and General Science major Corinne Glennie is the co-president of the Student Honors Advisory Committee, a resident assistant, and the founder of the Quidditch Club on campus. Glennie frequently volunteers at Juniper Park Elementary School and extended her volunteer work abroad by participating in an after school organization for HIV-positive children in Cape Town, South Africa this past summer and a service learning project in Mexico in 2009.
History major Ryan Meersman is a member of Student Government Association (SGA) and has served as the sole student trustee on the University’s Board of Trustees for the past three years. Meersman’s community service efforts include raising money for the annual Neighborhood Association Turkey Drive, Head Start Westfield “All I want for Christmas” campaign, and leaf raking for the Cancer House of Hope. Meersman is also an Eagle Scout.
Political Science major Aleksandr Vlasenko pioneered the International and Intercultural Club on campus to help international students have a more comfortable transition to Westfield State. He has volunteered in the International Programs Office on campus and abroad as a camp counselor in orphanages in Russia and Belarus. Vlasenko is currently interning in Washington D.C. where he continues his community services efforts by working weekly in a soup kitchen.
Communications major Ian Wilson serves as the vice president of the Student Athletic Advisory Board and is a member of SGA. Wilson uses his athletic talents and interests to help others through working at Westfield’s Youth Hockey camps and volunteering at the annual New England Sled Hockey Invitational and the Special Olympics. Wilson said that volunteering is not one-sided. “Through these community service projects, I found that even though I might have been serving the community, I was equally being served,” Wilson said. “Each event has offered a great educational experience outside of the classroom.”
The students were awarded at a dinner banquet and were presented with plaques designating their honor. For more information about the President’s Award for Excellence in Leadership, contact Susan Lamontagne at 572-5425.