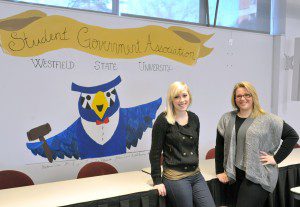 WESTFIELD – Westfield State University (WSU) students returned to campus yesterday and discovered something new at the Ely Campus Center.
The basement level, which was once inaccessible from the outside, now boasts a new garden level entry, a full service Dunkin Donuts, revamped Student Government Association space, and a bright new Owl’s Nest multipurpose room.
A ribbon cutting ceremony was held at Ely, which also houses the revamped Wellness Center and library, as well as a Subway restaurant and class and meeting space.
The renovations are part of a $73.8 million campus improvement that included a 300 seat expansion of the Tim & Jeane’s Dining Common, already completed, and the construction of the University Residence Hall which is set to open in the fall.
WSU Director of Facilities Curt Robie said the new residence hall is 160,000 square-feet and features apartment-like suites.
“We asked students what they wanted and they said apartments,” said Robie. “We can’t give them true apartments, but these have a living room, bedrooms, bathrooms and a mini kitchen with microwave and refrigerator.”
Each level of the building will have a common kitchen and lounge area. Located in the back corner of the campus, the new hall will feature large windows overlooking the campus green as well as views of Route 20 and the mountains beyond.
Robie said all construction on campus went through the state bidding process and local contractors and subcontractors were used whenever possible.
“Part of the Ely construction was done by Evergreen Construction out of Chicopee, and we had skilled workers, painters and electricians that were local,” Robie said.
With all the talk about future construction on Western Avenue, Robie and Westfield State spokesperson Molly Watson both said the growth on campus is not expected to impact that work.
“This is more about improving the campus quality than anything else,” said Watson.
WSU has 5,600 total students, with 2,700 living on campus.
Students Michelle Hanney and Alexis Wagner, both members of the Student Government Executive Board, said they love their new space.
“It looks awesome,” said Hanney. “I love that people come in the building and see the room now – before it was hidden.”
Wagner said having a visible meeting space means students will be more aware of the group and may want to join.
“It’s so nice now, I think people will want to come in and it will motivate us,” she said.
The new Owl’s Nest seats 100 and is a room that could be used for small theatrical performances, open-mic nights, speaking events, meetings and more.
Assistant Director of the Campus Center Jesika Murphy was excited to get started using the space.
“We can clear out the tables and chairs and have a dance, we can set it up banquet style – it has so many uses,” Murphy said.
Library Director Thomas Raffensperger said student input was an essential part of the renovations there.
“Students were surveyed and they wanted a variety of work spaces,” Raffensperger said.
Students wanted to be able to work alone, in pairs and in groups. New computer work stations allow students to spread out their materials, while more traditional library tables feature unique lighting complete with electrical outlets to plug in laptops.
“They also asked for lots of outlets,” Raffensperger said.
On the second level of the library, a large computer room features 24 work stations, including wheelchair accessible stations, two large 42-inch monitors mounted to the walls, and a Smartboard. Raffensperger said university librarians teach approximately 270 classes in the space throughout the year. Also upstairs, three work/meeting spaces, featuring removable white board walls, can be expanded into larger spaces that can also be used for classrooms.
Raffensperger said the library boasts an extensive archive collection and the renovation allowed them to display some of the collection on the walls, including a large print of a student outing club in 1896. Raffensperger said the photo is telling of Westfield State’s history because it features an integrated club of women, men and African American students – a group that was almost unheard of at the time.
“That is an important part of our hisory,” he said.
Funding for the campus improvements came from WSU, the state Department of Capital Asset Management and the Massachusetts State College Building Authority. Robie said the next area set for renovations is the apartment complex which includes Conlin, Welch and Seymour halls.
Robie said future building projects include construction of a new science based academic building. He added that once the university takes control of Juniper Park School, it will likely be an art and music space. To view additional photos log into http://thewestfieldnews.smugmug.com/Other