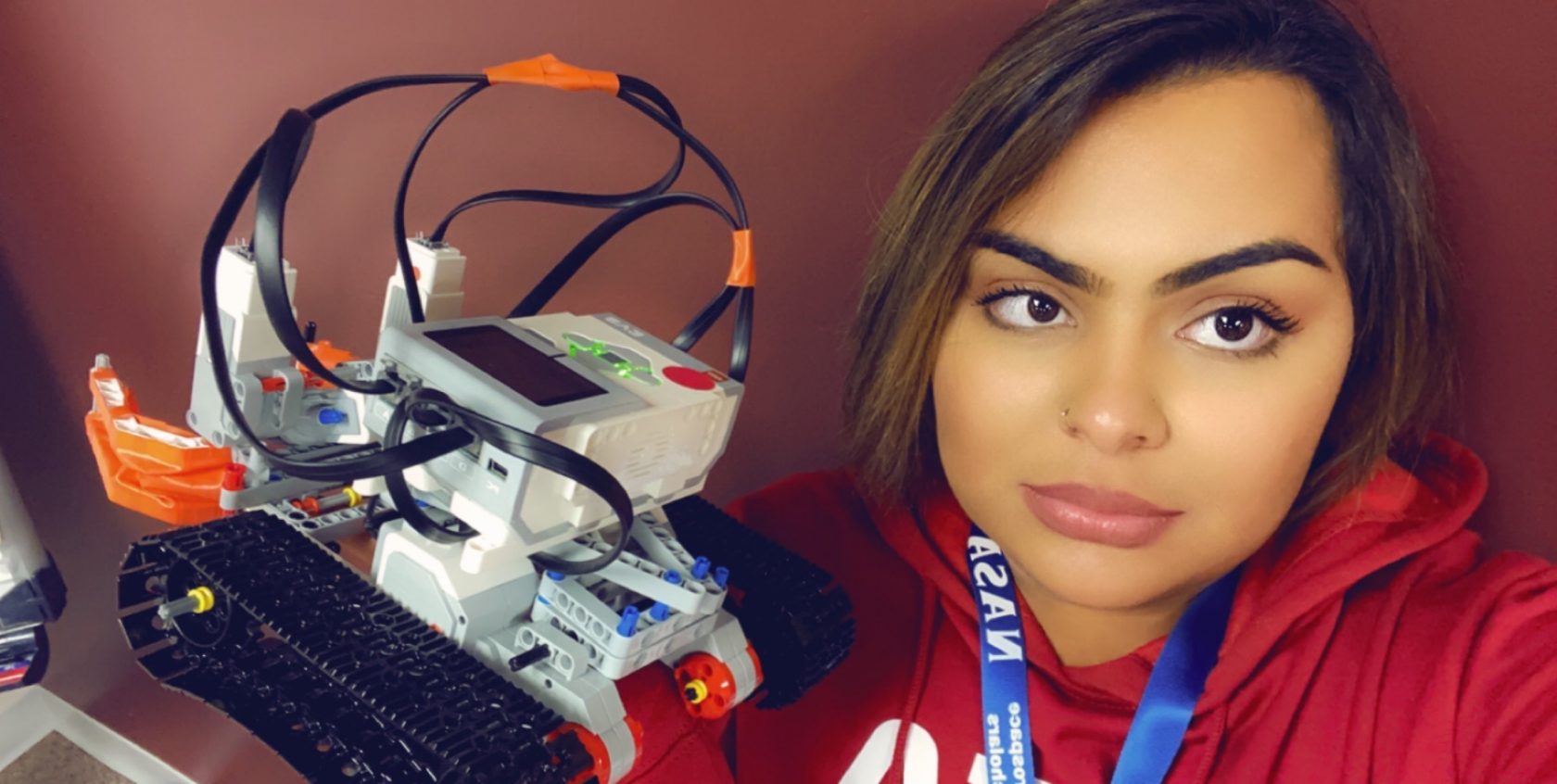 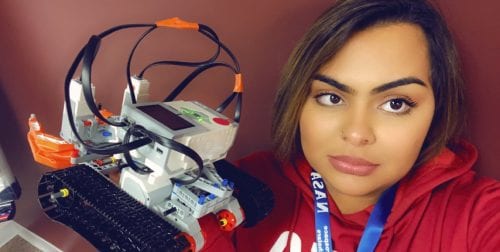 WESTFIELD – A Springfield Technical Community College student from Westfield has just gone on an adventure of a lifetime. Aminah Bergeron was one of 524 community college students from across the United States selected to attend the NASA Community College Aerospace Scholars (NCAS) Onsite Experience at Wallops Flight Facility in Virginia, March 2-6.
“It was great. I made so many connections. I thought I was living a dream,” Bergeron said about the experience.
As part of the application process, Bergeron created images of a 3-D model of a Mars rover, which she submitted to NASA. Bergeron said there were three choices for the application; to write about Mars or read about it. She said she likes to build and made a 3D imaging Mars Rover with different features on it, the third choice. She also successfully completed a five-week online course which led to a visit to a NASA center. 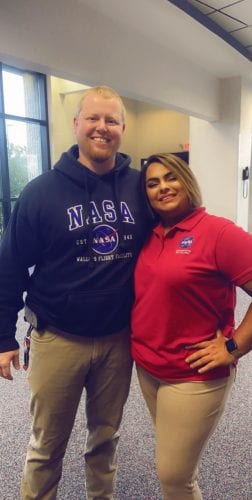 At NCAS, Bergeron was on a student team that established a fictional company interested in Mars exploration. Each team was responsible for developing and testing a prototype rover, forming a company infrastructure, managing a budget and developing communications and outreach. Each was assigned a mentor from NASA.
Bergeron served as the design engineer for her team. She said they were given the parts to build the model, and had to decide how much of a motor was needed, among many other decisions. Besides working as Design Engineer, she also helped her teammate assigned to coding.
Bergeron said their Mars Rover picked up two rocks in the first task, the only one to do so, winning first place in that part of the competition. “I’m proud of it,” Bergeron said.
She said the team worked around the clock, one night barely getting two hours of sleep before they had to give their final presentation.
“We had to go on stage. I was so nervous,” Bergeron said. She said NASA made an audio broadcast of the competition to all NASA employees. “It was phenomenal. I still can’t get over that I attended this,” she said. 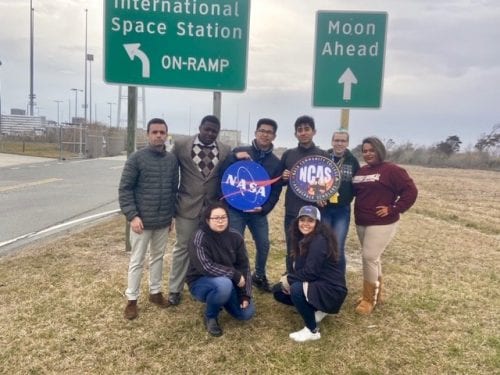 Bergeron with her student team at NASA. She said they hope to meet up for the rocket launch on Aug. 31.(THE WESTFIELD NEWS SUBMITTED PHOTO)

Besides working on their model, the students toured the NASA complex in Virginia. They went to Mission Control, got up close to the planes on the hangar, and went to where they make the steel parts for the rockets, using a water jet for the smaller parts. Bergeron said the water jet can cut smaller parts more accurately.
“I saw a rocket that will take off Aug. 31 to the International Space Station,” Bergeron said. She said they were still building it, and it was in three stations. Her group saw the bottom section that will detach during the launch.
For her efforts, Bergeron received a certificate saying that she completed the 2020 College NASA Aerospace program, which she said she is going to frame and hang on the wall.
“It was so awesome. I loved it. Everyone was so kind and nice,” Bergeron said.
Bergeron said the employees in Virginia encouraged the students to consider NASA as a career. “45% of their employees are nearing retirement age and were all saying, ‘Come, take our jobs’,” she said.
“I spoke with a lot of people,” Bergeron said, adding that she gave out 40 resumes and hopes to be considered for an internship.
She also hopes to go on a road trip, meet up with her teammates, and watch the rocket launch on August 31. “We saw it!” she said.
Now in her first year at STCC, the 26-year-old engineering transfer student hopes to pursue her bachelor’s degree in computer science from a four-year college or university after receiving her associate degree. Bergeron said her top two choices are the Massachusetts Institute of Technology or Westfield State University.
Bergeron found out about the Aerospace Scholar program through Professor Beth McGinnis-Cavanaugh, professor and chair of the Civil Engineering Technology program.
“This is a phenomenal opportunity for Aminah, and I’m thrilled she was selected,” McGinnis-Cavanaugh said. “I applaud her for taking the initiative to apply for the NASA onsite experience. One of the great benefits of coming to STCC is access to these kinds of opportunities and the personal support of faculty in pursuing them. This will be a life-changing experience for Aminah as well as future students who will apply because of her success.
Bergeron also received help from another faculty member at STCC, Karen Hachadourian, who wrote a recommendation letter to NASA on Bergeron’s behalf.
“I’m grateful to Professor McGinnis-Cavanaugh for letting me know about this opportunity and am beyond thankful to Professor Hachadourian and my family for being so supportive,” Bergeron said. “My family is so proud of me.”
According to a NASA press release, the Minority University Research and Education Program, or MUREP, funds NASA Community College Aerospace Scholars. MUREP is committed to engaging underrepresented and underserved students in science, technology, engineering and mathematics (STEM) with authentic learning experiences to sustain a diverse workforce.?
With this activity, NASA continues the agency’s tradition of engaging the nation in NASA’s mission and leading an innovative and sustainable program of exploration to enable human expansion across the solar system and to bring back to Earth new knowledge and opportunities.?
For more on MUREP visit:?www.nasa.gov/education/murep?