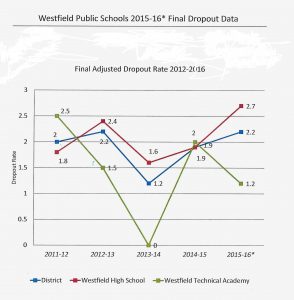 WESTFIELD – Currently, the four-year graduation rate for Westfield HS is at 91% and Westfield Technical Academy is at 93.7%, both well above the state average of 87.5%, according to Superintendent Stefan Czaporowski.
“That’s really good news to hear,” he said.
The news is more mixed for the dropout rates. The state’s annual dropout rate remained at 1.9% in 2015-2016 for regular comprehensive academic schools. Westfield High School hit 2.7% last year, which is higher than the state average.
Czaporowski pointed out that the state-wide dropout average for charter schools is 3.3%, the highest of any category. “How come no one wants to focus on the dropout rates at charter schools? They are always higher,” he said, adding that at 2.7%, Westfield’s rate is still lower than the charter schools.
For vocational-technical schools overall, the dropout rate is the lowest statewide, at .9%. For city/town vocational schools which include Westfield Technical Academy, the state average is 2.1%. Westfield Tech’s dropout rate is 1.27%, higher than vocational schools as a whole, but lower than the 2.1% rate for city and town vocational schools.
What that means in numbers for Westfield High School is the loss of 33 kids last year. “One student dropping out is too many,” Czaporowski said. He said that Westfield High School’s new principal Charles Jendrysik made it is his number one priority to stop the rate of dropouts.
Towards that end, Westfield High School started a Pathways program this year.
“We have re-engaged nine of those students in the Pathways program,” Czaporowski said.
Pathways was started on a $40,000 grant from the Department of Elementary and Secondary Education in November. Students meet from 3-6 p.m., Mondays through Thursdays at Westfield High School.
In addition to the nine students who returned for the program, an additional five at-risk students are enrolled. Czaporowski said the students receive direct instruction from teachers, and online instruction through a program called “Edgenuity.”
He said many of the students in Pathways work in the morning or they do community service.
According to Czaporowski, exit polls show that the number one reason students give for dropping out is non-engagement. “They’re not engaged in school, they don’t see the purpose in it. Or they fell too far behind,” he said. With Pathways, a student can work on it anytime from home. He said the students that came back are re-engaged.
While the program has been very successful, Czaporowski said the reason they were able to introduce it this year was due to the grant funds. Next year, the district is trying to work it into the budget, “because we need it,” he said.

“My goal is that every student in Westfield Public Schools will earn a diploma,” Czaporowski said. He said the district’s biggest priority is to reduce the dropout rate, and also to try and re-engage kids who have already dropped out. “By re-engaging some of these kids we’ll get those numbers down,” he said.
Last year, Westfield High School also had a high rate of suspension. By the end of February of 2017, the suspensions were down by 36.9%.
“If a kid did something wrong, they shouldn’t be in school, don’t get me wrong,” Czaporowski said, adding, “The more you suspend a kid, the more they’re at risk of dropping out.”
One action that Westfield High School took this year was to establish a Saturday School. Rather than get a suspension, a student may have to come to school on Saturday. The school is also trying to get them the work they’re missing, or the extra help they need.
Is it a consequence? “Absolutely,” Czaporowski said. He said they have also looked at giving kids community service instead of suspension.
“We try to work with the students to make sure their behavior isn’t repeated, or give them coping mechanisms. Give students the means not to make the same mistake again. We’ve seen progress with it,” he said.
The district is also talking about creating an Alternative School for Westfield High School for grades 9-12 in the Boys and Girls Club next year. The Alternative School would have 50 students. Right now, they are looking at which students would make up the ideal population for the school. The first planning meeting will be held the first week in April. The school would offer online courses, teachers, and programs to meet social-emotional needs.
Czaporowski said an Alternative School would be another way to limit the number of dropouts. He said this is also being put into the budget, which is scheduled for a presentation on March 28.
“We know we have a problem. We’re fixing it,” Czaporowski said.