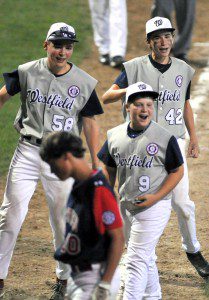 WESTFIELD – The Westfield Babe Ruth 13-Year-Old Stars sure are having their one shining moment.
Westfield defeated Pittsfield 8-6 in extra innings in one of the Whip City’s most heart-pounding, spine-tingling eastern regional baseball thrillers played in decades at Bullens Field Sunday night. And it may prove to be one of the most important victories for the hometown boys.
Westfield’s Austin St. Pierre scored the game-winning run in the top of the ninth inning, and Ari Schwartz came on to close out the final inning.
Westfield advances to the semifinals against New Milford (Conn.), a 5-4 winner over Warwick (RI). The game will be played Monday night at 6.
“Every play we just kept making plays; every play we gained more momentum,” said Westfield third baseman Shaun Gezotis, who played stellar defense and turned two key double plays. “We were on the bench, jumping out of our seats. In the end, we came back and won. I’m so happy now.”
Pittsfield scored the first run of the game with consecutive two-out doubles from Shane Tierney and Simon Nassif in the first inning.
Westfield wasted leadoff doubles in each of the second and third innings – a booming double to left center field from Anthony Clark and Zach Jarvis’s double, driven all the way to the left field fence.
In the second inning, following Clark’s extra base hit, Pittsfield pitcher Connor McDonough induced three straight fly-ball outs to escape unscathed. In the third, Westfield grounded out once and popped out twice after Jarvis’s hit.
Westfield finally cracked the scoreboard in the top of the fourth, and put another chink in Pittsfield’s armor.
Sean Moorhouse reached on an error to lead off the inning, and stole second base. Clark walked. After a forceout at second base, Schwartz laid down a perfect sac-bunt down the first base side to push home the tying run. Murphy stole second. Then an infield error on Tommy Smith’s at-bat, and consecutive walks to Jarvis and Shaun Gezotis set the table for Westfield’s lead-off hitter. St. Pierre cleaned up in the lead-off spot, driving in two runs with a liner off reliever Shane McMahon through the right side for a 4-1 lead.
Westfield tacked on another run in the fifth on Schwartz’s bases-loaded, suicide squeeze. Moorhouse, who was standing on third after collecting a one-out base hit and advancing twice on wild pitches, crossed home plate to make it 5-1.
Westfield pitcher Sean Murphy, who was effective on the mound forcing Pittsfield’s batters into pop flies and groundouts, ran into a bit of trouble in the fifth.
After an infield error, a one-out single from McDonough, and a walk to load the bases, an infield error and a Shane Tierney single cut the lead to 5-3. But with the bases loaded, second baseman Schwartz snared clean-up batter Simon Nassif’s weak liner and doubled up the runner attempting to retreat to first base.
It was the third double play of the game for Westfield.
Earlier in the third, Gezotis, at third, caught a line drive and doubled up the base runner going back to first base. Westfield also turned a 5-4-3 double play to end the fourth.
Westfield continued to work hard to tack on runs, knowing a lead was never safe against Pittsfield – the Whip City bunch had only been able to beat their nemesis once this postseason, were beaten in the state championship against them, and struggled in previous years with their fierce opponent as well.
“They’re always a tough team,” Westfield manager Mike Smith said of Pittsfield. “I respect them a lot. …But (our) guys are very competitive.”
Jarvis led off the sixth with a single and stole second base. He scored on St. Pierre’s RBI single to take a 6-3 advantage.
Pittsfield rallied.
In the bottom of the sixth inning, Pittsfield was hit by a pitch before drawing consecutive walks off reliever Sean Moorhouse to load the bases. A wild pitch cut the lead to 6-4, and a two-out, two-run single from Jack Scarafoni tied it 6-6.
Westfield threatened with the go-ahead run in the top of the seventh when Clark (2-for-2, 2 walks) singled, but the pinch runner was tossed out trying to steal second. A ground out and pop out ended the inning.
Just when it looked like momentum had swung in favor of Pittsfield, Moorhouse settled down on the mound to retire the side – the Nos. 2-3-4 batters – via strikeout and two groundouts to Gezotis at third.
Pittsfield flexed some defensive muscle of its own in extra innings when right fielder Austin Cancilla robbed Jarvis of at least a base hit on a diving grab. A fly out and strikeout failed to produce a hit.
Westfield’s defense continued to remain tough though.
With the bases loaded in the bottom of the eighth, shortstop Scott Walsh made a diving rob for the second out and Moorhouse gloved a hard-hit liner mid-air to end the inning.
Westfield remained resilient.
St. Pierre walked and Scott Walsh singled to begin the ninth. The two base runners successfully pulled off a double steal. St. Pierre scored on an infield error, beating out the throw to home from the first baseman who fumbled picking up a weak grounder. Walsh eventually came around to score on a wild pitch. Westfield led 8-6.
In the bottom of the ninth, Schwartz, who had one inning left of eligibility on the mound for Sunday’s game, retired the side for Westfield, two by way of strikeout to secure the victory.
In other games Sunday, Marblehead (Mass.) beat Central Maine 11-8 and Manchester (NH) routed Bennington (VT) 9-2.
Monday’s schedule features Pittsfield vs. Marblehead at noon, followed by Warwick (RI) vs. Manchester (NH) at 3 p.m., and Westfield-New Milford (Conn.) at 6. All games will be played at Bullens Field.