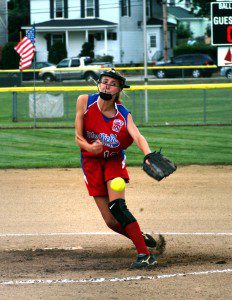 WORCESTER – The Westfield Little League Softball Senior All-Stars will need to climb out of a hole if it wants to stay in the hunt for a trip to the World Series.
New Gloucester (Maine) took advantage of Westfield’s fielding miscues and scored three unearned runs en route to a 6-1 win in a rain-shortened, five-inning eastern regionals tournament opener at Ty Cobb Field. Another loss late last night left Westfield looking up at an 0-2 deficit with two games to play.
Maine broke open a 1-1 tie game with four runs in the bottom of the third inning.
Katelyn Tucker reached on an infield error. Westfield forced the next batter, Sam Libby into a ground out. Tucker was forced out at second base. Libby advanced to second base on a wild pitch. Maine pitcher Taylor Whaley (2-for-3) singled to right field. An outfield error allowed a run to score. Abby Ordway singled and stole second base. With runners at second and third, Maddie Elliott drove a hard-hit ball up the middle to score two. Emily Harlow singled. A pick-off attempt soon went awry for the fourth run of the inning and a 5-1 lead.
A Whaley RBI single in the fourth made it 6-1.
Raindrops began to fall early in the top of the fifth, but by the bottom of the inning a deluge of rain blanketed the area. The game was halted, and 20 minutes later, called. Having gone a full five innings, the result was official: Maine 6, Westfield 1.
Westfield’s only run came in the third inning on run-scoring hit from Kaitlyn Puza.
In the third, Taylor St. Jacques reached on an error, advanced on a wild pitch, moved to third on a single, and scored on Puza’s run-scoring hit.
Maine had scored earlier in the top of the second on Sandy Ricardi’s sac-fly.
Late yesterday, Westfield fell to 0-2 as Jen Moller suffered a tough-luck defeat with a one-hitter on the mound, a 1-0 loss to Jesse Burkett, of Worcester. Jesse Burkett scored the game’s only run, unearned, in the second. Westfield stranded two base runners in the seventh.