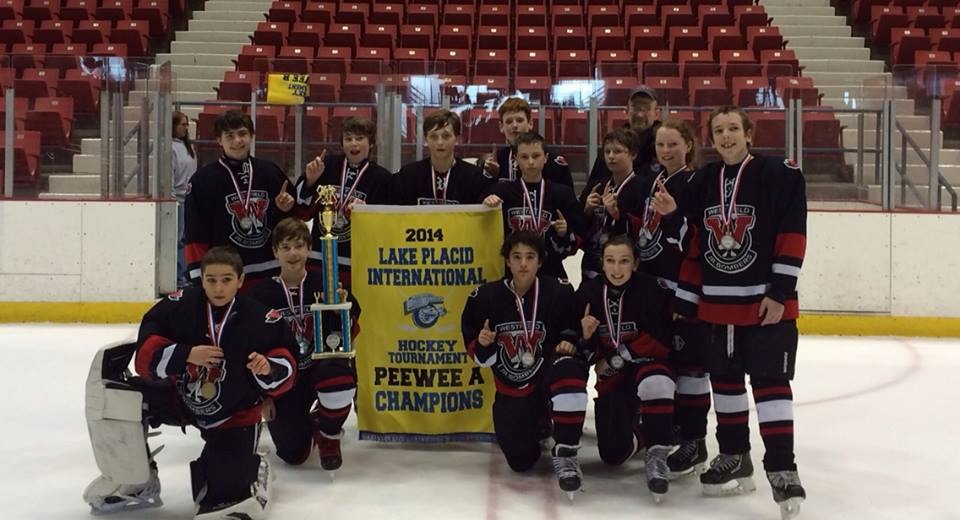 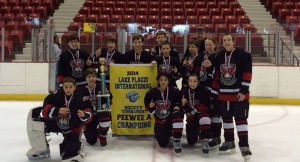 The PeeWee A team celebrates a championship at the Lake Placid Tournament on March 2. (Submitted photo)

Westfield Jr. Bombers 21, Franklin County 12
Saturday, February 15, 2014 at Smead Arena, Springfield, MA
Division: Mite 2
After a few short-handed games over the past couple of weeks, the Westfield Jr. Bombers went up against FCHA at Smead Arena for the 3rd time this season. Westfield brought their ‘A’ game and came out on top thanks to great passing and defense. Jarred Ritter had a phenomenal game playing goal for the Jr. Bombers, sacrificing only 12 of the (36) shots against him. Sean McMahon would start out the goal scoring for Westfield and end up with three goals for the game. Evan Grant would follow suit with another three goals for Westfield and one assist. Darrin Schnopp scored two goals, one being assisted by Michael Miller, and Katie Collins would net three goals of her own as well as four assists. David Forrest was on fire scoring a notable four goals with assists by Jesse Spear and Michael Pelletier. Scoring two goals each were Spear, Patrick Rae and Michael Miller. Against FCHA, Westfield now holds two wins and one tie for the season.

Westfield Jr. Bombers Red 17, Ludlow 12
Saturday, February 22, 2014 at Smead Arena, Springfield, MA
Division: Mite 3
The Junior Bombers had one of their best games of the season in a big win against Ludlow. The team played excellent defense and worked together to attack the Ludlow goal for the entire game. The crowd was impressed by their energy throughout the game. Joey Tymeson was in Westfield’s goal, saving 11 in the win. Leading the offense was an impressive five goals for Joey Roselli, four goals for A.J. Robbins, and the hat trick for Brandon Houle. Gavin Connors and Ryan Rodgers each had two goals a piece and Sean Rodgers had one. Spencer Roy and Jacob Hanselman were strong defensive players and contributed assists in more than one occasion.

Pioneer Valley Lightning 11, Westfield Jr. Bombers 10
Sunday, February 23, 2014 at Olympia Ice Center, West Springfield, MA
Division: Mite 3
The Westfield Junior Bombers Red team finished out an exciting weekend, dropping an 11-10 thriller to Pioneer Valley on Sunday. The Bombers mounted a furious rally to tie the game late only to have the Lightning score with seconds to play. In what was the most exciting game of the season, Westfield played with great pride to overcome a late three goal deficit. Evan Michelucci led the charge with three goals while Gavin Connors and Brandon Houle added two apiece. Nolan Lafayette, Joe Roselli, and Spencer Roy also scored for the Bombers. Joey Tymeson was stout in goal late in the game. His 17 saves allowed the Bombers to begin their comeback.

Westfield Jr. Bombers 2, Ludlow Gold 1
Saturday, February 15, 2014 at Amelia Park Ice Arena, Westfield, MA
Division: Squirt 2
As the season starts to wind down, the Bombers are looking to finish strong. And they did so with a solid win this morning over Ludlow. The first period had both teams moving the puck well and kept the action moving from one end of the ice to the other. Westfield broke up the tie in the second period when Olivia Lawry set up behind Ludlow’s net and fed Andrew Eidinger, who then found the back of the net. The Bombers added their second goal when Gage Sperlonga gave it up to Drew Glenzel and then beat the Ludlow net minder. As the 3rd period ticked down, Ludlow was able to get on the board with a wicked wrister that beat Westfield goalie Sean Rowbotham. Up until that goal, Rowbotham had turned away numerous shots throughout the game and kept the Bombers in it. Westfield’s defense played solid, with Harrison Klein, Aiden Jubb, Kalya Russ and Elyse Eidinger all making great plays. But Jake Marcoulier was huge when he broke up a sure breakaway towards the end of the game. And Ryan Major came through big time blocking a Ludlow shot as time expired.