Westfield Jr. Bombers 14, FCHA 13
Saturday, January 25, 2014, Collins-Moylan Arena, Greenfield, MA
Division: Mite 2
The Westfield Jr. Bombers Mite 2 team played a very evenly matched game, just edging out FCHA for a one point victory. Darrin Schnopp did a great goaltending job with 25 saves. Nathan Sarabaez started the scoring off for Westfield just 80 seconds into the game. Patrick Rae was on fire, scoring four goals. Katie Collins would net a hat-trick and two assists and Evan Grant would net three goals as well. Sean McMahon scored two and both David Forest and Jesse Spear netted one a piece. Scoring went back and forth throughout the game between the two teams, both making a notable effort.

Westfield Jr. Bombers 13, Amherst 8
Sunday, January 26, 2014, Smead Arena, Springfield, MA
Division: Mite 2
Westfield Jr. Bomber goaltender, Darrin Schnopp got quite a work-out as net-minder today, stopping 42 of the 50 shots against him. Patrick Rae would match his efforts of the previous day’s game, once again netting four goals. Both Evan Grant and Katie Collins would get their second hat-trick of the weekend with three goals apiece. Jarred Ritter had several shots against the Amherst goaltender scoring twice and Sean McMahon would score once. In another evenly matched game, Westfield made a solid defensive effort throughout the game and kept the pressure on for this victory.

Westfield Jr. Bombers Red 8, Ludlow 5
Saturday, January 25, 2014 at Olympia Ice Center, West Springfield MA
Division: Mite 3
The Westfield Junior Bombers Red took on Ludlow on Saturday at Olympia Ice Center. The Bombers came ready to play and turned in their best performance of the season. On the attack from the beginning, the boys kept up the pressure all morning to secure an 8-5 victory. Joe Roselli’s hat trick and Evan Michelucci’s two goals led the charge on offense for Westfield. They were supported by goals from Nolan Lafayette, A.J. Robbins and Spencer Roy. Collectively, the Bombers poured shots on goal as a result of great teamwork and passing. At the other end of the ice, Gavin Connors turned in great performance in net. Improving every time out, he stopped 18 shots and turned away Ludlow time and again. As evidenced by their post-game excitement, this was a great effort by a young team hungry for a victory. 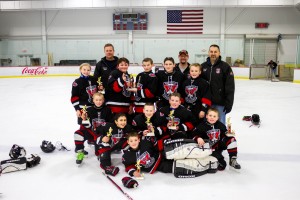 Westfield Youth Hockey’s Squirt 1 team finished runners-up after making it to the championship game in their division at the Westfield Fire & Ice Tournament held at Amelia Park Jan. 17-19.

Pioneer Valley 11, Westfield Jr. Bombers Red 5
Sunday, January 26, 2014 at Olympia Ice Center, West Springfield MA
Division: Mite 3
The Westfield Junior Bombers Red and Pioneer Valley Lightning squared off Sunday morning at Olympia. The Lightning had a little more push in the back half of the contest and pulled away for an 11-5 win. The Bombers were led by Nolan Lafayette’s three goals in the loss. Evan Michelucci and Sean Rodgers each recorded a goal for Westfield. The story of the day was on the other end. Despite allowing 11 goals, Gavin Connors was superb in goal for the Bombers, saving a whopping 27 shots. He did an excellent job of keeping the Red team in the game, but the Bombers couldn’t quite come up with enough on the offensive end.

Holy Name Stars 15, Westfield Jr. Bombers White 4
Sunday, January 26, 2014 at Olympia Ice Center, West Springfield, MA
Division: Mite 3
Jacob Millard started the game off with a good start and scored the first goal within the first minute of the game. Ryan DeFalco and Owen Colbath worked together in front of the Holy Name net and put another goal in. Richard Moritko led the Bombers with two goals. All players worked hard to help out their goalie Brannon Miele. Brannon was fantastic in the goal and he had more than 25 saves. Cody Bard, Nicholas LaComb, Paul Lawry, Quinn O’Brien, Kaitlyn Ondrick and Gavin Trzepacz all had a great game.

Westfield Jr. Bombers 3, Amherst 2
Saturday, January 18, 2014 at Amelia Park Ice Arena, Westfield, MA
Division: Bantam 2
The Bantam 2 Jr. Bombers earned a hard fought 3-2 decision over Amherst in another in a long line of tight, grueling games for the team. The first period found the Jr. Bomber defense stepping up their game on both sides of the puck. Led by Charlie Bonatakis, Devin Baker and Wyatt Jensen, the defense didn’t allow a single shot on goal through the first stanza. Then, with time running down in the period, Tyler Bennett ripped a slap shot past the Amherst goalie to give Westfield the 1-0 lead going into the second period.
From there, things tightened up. Amherst got on the board 2:48 into the period, as Amherst found a way to slip through the defense and beat Westfield goalie Matt Brady. Just 56 seconds later, Amherst again got a shot past Brady and somehow found themselves up 2-1. As this team has done time and again when they’ve found themselves down, the Jr. Bombers picked themselves up, dusted themselves off, and got back into the game. First, Liam Webster took a pass from Jack Labbe to tie the game up at 2, and the with just over 3 minutes left in the second, Spencer Cloutier gave Westfield the lead back on a feed from Danny Antonellis.
The third period found Westfield constantly short-handed, with the Jr. Bombers being called for six penalties in the frame while Amherst was not whistled for any. From just over one minute into the third until the final minute of the game, Westfield played down a man in 9 of the 13 minutes. But once again, the defense stepped up and stood tall, led this time by Johnny Pitoniak and Brandon Laviolette, and only allowed two total shots on net for the entire period.

Westfield Jr. Bombers 3, Franklin County 3
Sunday, January 19, 2014 at Collins-Moylan Arena, Greenfield, MA
Division: Bantam 2
The Jr. Bombers earned a hard fought tie with the first place Franklin County team, solidifying their spot in the GSL playoff hunt with the 3-3 tie. After a scoreless first period that saw Westfield come out and dominate play (outshooting Franklin County 6-2), Westfield jumped out on top halfway through the second as Jack Labbe jammed home a Charlie Bonatakis rebound.
But that goal seemed to awaken the sleeping giant, as Franklin County’s Cassidhe Wozniak scored two in the final two minutes of the second, including the second with just 9 seconds left, to give Franklin County a 2-1 lead after two.
Westfield seemed to still be a bit shell shocked as the third began, and Ethan LaFleur took advantage of the situation to get behind the defense and beat Matt Brady for a commanding 3-1 lead. But once again, the Jr. Bombers found an inner resolve, and refused to quit. Spencer Cloutier got the comeback started as he raced down the right side of the ice and ripped a shot past the FCHA goalie to close the gap to 3-2 with just over 8 minutes remaining.
With the Westfield defense, led by Charlie Bonatakis and Tyler Bennett, clamped down on the FCHA offense, Nikita Chepurin took an assist from Cloutier and tied the game back up with just over 5 minutes left. The last 5 minutes saw Westfield gain numerous chances from being on two power plays, but they were unable to deliver the knockout blow before the game ended. Westfield ended up doubling up their shots on goal 26-13. The tie boosted Westfield’s GSL record to 8-5-2, good for third place with 9 games remaining on the schedule.