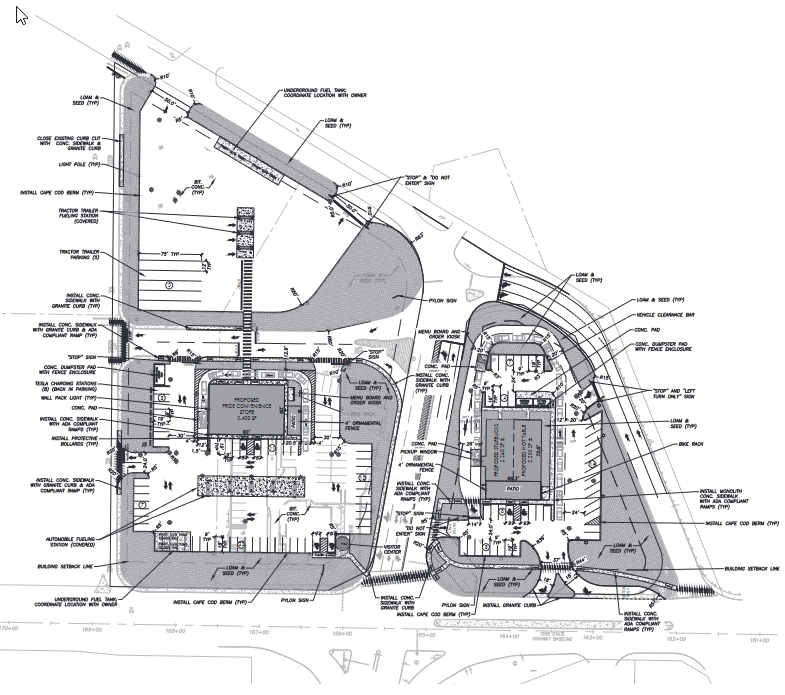 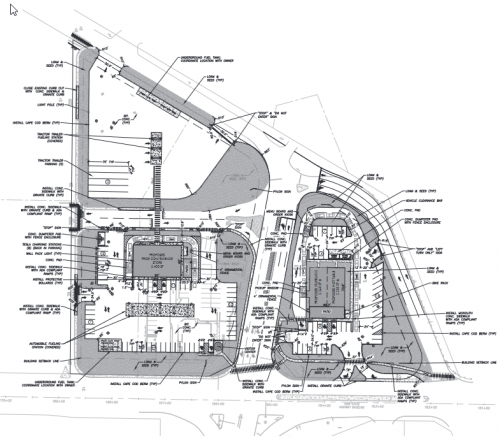 WESTFIELD – James Channing for Pride Stores, Jason Adams from McMahon Assoc. and Rob Levesque of R. Levesque Assoc. brought a revised plan for the proposed ‘WestPark’ development – a Pride Station, truck fueling station, Starbucks and Hot Table on Southampton Road at the turnpike entrance, to the Planning Board on April 6. The new design, which changed access and exit points convinced board members to unanimously approve a special permit, stormwater, and site plan for the project, which must now be approved by MassDOT.

Levesque said since the last public hearing, they had been working back and forth with City Engineers Mark Cressotti and Jeremy Cigal and MassDOT, and have had recent discussions with Capt. Michael McCabe from the Traffic Commission. Adams has been working with the city on layout revisions.

“Generally speaking, the Pride location hasn’t changed drastically. There were a number of updates made to the proposed Hot Table and Starbucks location which affects the site circulation and is based on feedback from the Engineering Dept. and MassDOT. If and when we do receive local approval, we will still have to vet this through the MassDOT process,” Levesque said.

Levesque said they still have the same building and same building location for the restaurants. Noticeably different from the previous plan is that the original access off the jughandle has been omitted and replaced with an entrance and exit to the site from a slip lane on Southampton Road that will bring cars right into the drive-thru lane, and out again onto Southampton Road.

Levesque said eliminating the entrance from the jughandle will keep traffic off. “We think that’s a real big improvement,” he said.

There is still an “exit only” to the jughandle toward the rear of the property which customers can take to go to the turnpike or continue back to the industrial park. There is also “enter only” access to the property from Friendly Way.

Levesque said the city has been talking to MassDOT about other improvements to the area. “In general where we’re at, we think we have a site plan that works well with what the city will be proposing independent of what we have. We have an entrance that the city generally supports and will work through MassDOT with us,” he said,

Responding to questions from the board, Levesque said there will be a 22 car stacking area to the pickup window at Starbucks. Planning Board chair William Carellas recommended a sign directing traffic from the drive through to take the exit onto the jughandle for the turnpike. He said drivers may otherwise use the Southampton road exit thinking they can take a left onto the turnpike, which is not permitted.

On the other parcel, Cheryl Crowe asked about the truck refueling area behind the Pride station, and whether there would be overnight service there. Levesque said there will be temporary parking, but no overnight stays allowed. He said Pride has a lot of experience with these types of facilities, and that will be restricted.

Crowe asked if the project will extend to the north side of the Pride lot where there is a grassy area. Levesque said there is a pad there which could be developed in the future but is not in the current plan. Crowe suggested planting some trees in that area where trash tends to accumulate. Crowe said the entire area needs to be maintained, and she doesn’t want to see the trash continue.

Levesque said there will be no excuse for the area not being maintained properly. “With three new viable tenants, the site will be maintained,” he said.

James Channing said Pride has no issue doing additional landscaping, but would like to do it at the same time as the other development.

Crowe asked whether Pride would be open to some kind of installation in front. “When you’re coming off the Pike, that’s the first thing you’re going to see,” she said.

Channing said they have a planned gazebo which is going to be a visitor’s center in the southeast corner. He said the gazebo will be a welcoming area and will soften the view of the gas station. He also said that Pride is open to enhancing it perhaps in combination with the Chamber of Commerce or Visitor’s Bureau, and would also be open to other suggestions and recommendations from the board.

Carellas said the city has been making a push towards adding sculptures, and if they could find a low maintenance installation, then they would be agreeable to considering that. Channing said absolutely, if it’s consistent with the development.

“This plan is significantly better than everything I’ve seen, and I want to commend you guys on that,” Carellas said.

City planner Jay Vinskey pointed out that these are two separate applications and decisions. The board did get a sign-off from the city engineer on stormwater, he said.

Vinskey said the Pride site is technically a shopping center, and the hotel sign was put up with the intent of adding signs under it. He said he is not sure the ordinance would allow a second sign on Southampton Rd. “That’s how I read the ordinance,” he said, adding that it allows one sign per street front for shopping centers.

Channing said when Pride applied for the master development plan in 2010, there was a decision that approved additional signage. He said the Pride sign would just be replacing the Friendly’s sign.

After more discussion, the board found that the Pride sign would be considered the Friendly Way sign; the Diesel sign, the Industrial road sign; and the hotel sign on Southampton road. Signage for any future business on the pad site would be on the hotel sign.  Signage for Starbucks and Hot Table is permitted, being on a separate parcel.
During public participation, Kathleen Hillman asked how she would go to Starbucks from Holyoke Road and Savage Arms. Levesque pointed to the “enter only” access on Friendly Way. He said MassDOT will mitigate traffic concerns there.

With no other public comments, the public hearings were closed for both parcels, and unanimously approved with conditions that included coming back to the board with any changes to access from MassDOT.