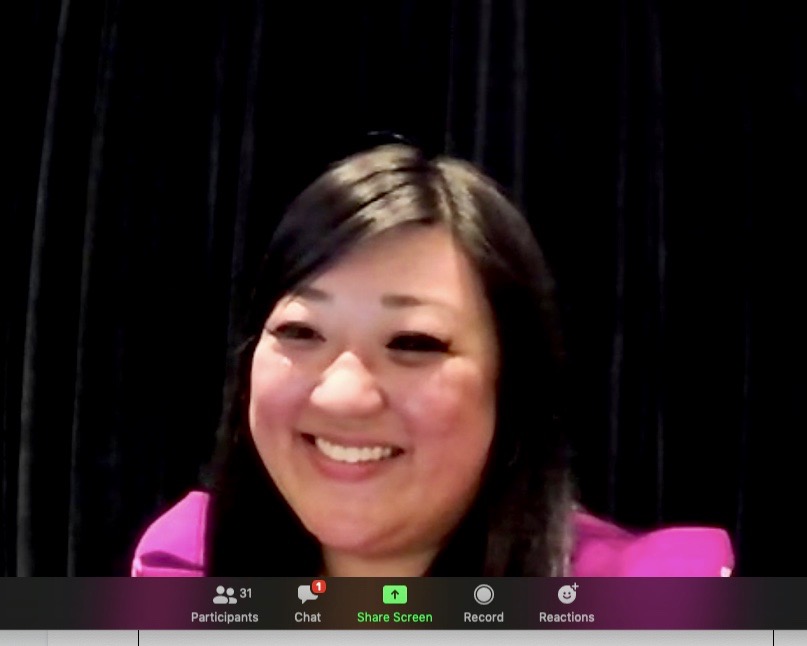 Kristen Smidy of Westfield has been selected the new superintendent of Gateway Regional. (SCREEN SHOT AT FINAL INTERVIEW)

HUNTINGTON – Hampshire Regional High School Principal Kristen Smidy was selected as the new superintendent of the Gateway Regional School District by a vote of 11 to 1 of the school committee on April 7.

School Committee Chairperson Michele Crane of Blandford started Wednesday’s meeting by thanking everybody who had been involved in the process, singling out current Gateway Superintendent David Hopson and Secretary Stacy Stewart who organized the effort, and Jason Forgue of Chester who chaired the search committee.

Hopson, who is retiring this summer after 18 years as superintendent, did not weigh in during the public forums.

Crane then asked that each School Committee share their impressions of the finalists and their ultimate choice for superintendent, and keep it positive. “There is no reason to highlight negative aspects of candidates,” she said.

Forgue began by sharing positive statements about each candidate, but saying that his choice was basically split down the middle between current Gateway Pupil Services Director Kurt Garivaltis and Smidy. Forgue contrasted Smidy’s enthusiasm, personableness and experience in a neighboring regional school district, with Garivaltis’ extensive background in other districts and at Gateway, which he has served since 2016.

“To me, it came down to those two. An hour ago, I was still up in the air,” Forgue said, adding, “In my opinion, Kurt is our best option to go forward.”

Edward Renauld, of Huntington said he had also been split between Garivaltis and Smidy until that morning. He said as a parent of a son on an IEP, he has had a very good experience working with Garivaltis. “He has been amazing working with us with our son. The feedback I received from employees at school; the people who work for him really like working for him… Once you work for this guy, he’s an amazing boss. I respect that,” Renauld said.

All of the other School Committee members said Smidy was their first choice, many referring to the “glowing” recommendations they had received from people who worked for her and knew her.

“She has the experience we need. She is coming from a regional district with kids who were leaving, and she put the work in to turn it around. When reached out upon, her employees felt she was really good at communication, willing to grow, and a perfect leader. She brings an enthusiasm that none of the other candidates do,” said Sarah Page, of Russell.

Melissa Nazarro, of Russell said Smidy’s experience in a neighboring district spoke to her as did her work on several committees with the Department of Elementary and Secondary Education, and called her “a breath of fresh air.”

Brian Forgue, who served as a Gateway student representative on the search committee, also endorsed Smidy, saying she has the “right exact mix of professionalism and enthusiasm.” He said while he had no vote, Smidy had his endorsement.