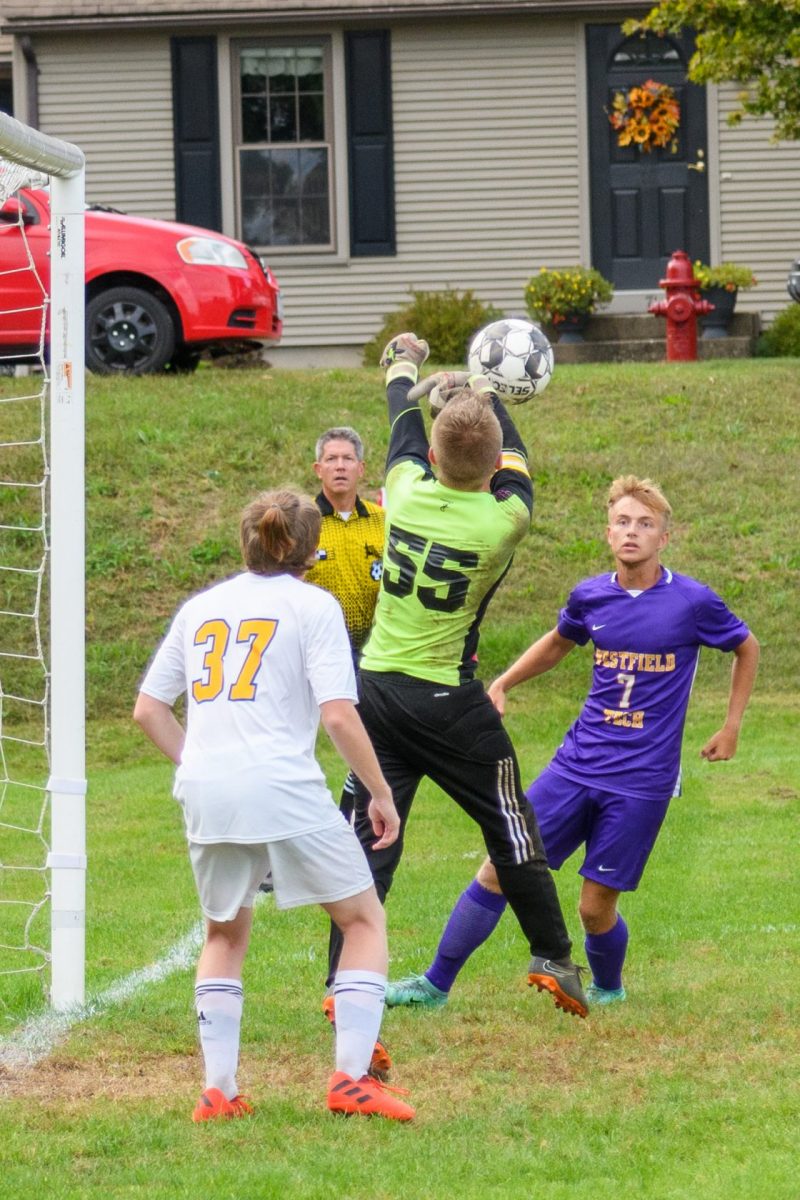 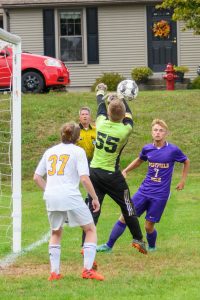 On a Westfield Tech corner kick with David Bulatov (7) on the doorstep, goalie Preston Coffey (55) backhands the ball into a safe area. (BILL DEREN PHOTO)

WESTFIELD – One Westfield Technical Academy student-athlete found out that there truly is a first time for everything.
Westfield Tech junior David Bulatov scored two second half goals using his left foot for the first time – – he is primarily a right-footed kicker – – and the Tigers held off the Gateway Gators 3-2 Wednesday at Jachym Field.
“I’m usually not a lefty and this time I took my chance with a left foot and something came out of it,” Bulatov said. “My coach keeps telling me to use it and I guess he was really right because I did end up getting two goals with my left foot.”
Bulatov’s first scoring effort came off a pass from Steven Velazquez in the opening minutes of the second half. His second score was a thing of beauty, taking a pass from Owen Carpenter and dribbling the ball past a wall of defenders before chipping it over the goalie, who attempted to come out of net and make a save. The goal came with 31 minutes remaining in the second half.
The game was far from over.
Gateway regrouped, scoring in the 55th and 58th minutes with goals from Ryan Keach and Owen Przybyla. Landon Richard and Ryan Morin each earned an assist.
“I guess we kind of relaxed after we got the lead but then after they got two goals back we kind of starting pushing again,” Bulatov said.
Now clinging to just a one-goal lead, Westfield Tech went on the offensive. Bulatov stole the ball in the Gateway zone and seeking a hat trick, attempted a shot on net – – but the ball went high. Tim Lezhnyak soon earned a direct kick for the Tigers but that chance was thwarted.
As time in the second half waned, Westfield Tech began kicking the ball far upfield or out of bounds.
“We were more focused on defending at that point and really trying to get that last gasp we had in us,” said Bulatov, admitting he began to cramp up late. “I was just trying to clear everything, make sure they didn’t get another goal.”
Westfield Tech’s defense made a final stand in the closing seconds. Tigers goalie Liviu Mocanu made the initial stop on a Gateway shot but with the ball dangling out in front of an open net, Lezhnyak stepped in and safely cleared it away.
It was an impressive win for Westfield Tech, who was shorthanded for various reasons. Tigers freshman Mason Jaquier came off the bench to provide key minutes up front. Bulatov, who normally plays striker, was moved to center-halfback on Wednesday. Senior captain Alec Smith continued to provide a key leadership role for a relatively inexperienced starting unit. And, of course, Nick Povar scored the only first half goal off a feed from Logan Gendron, which went a long ways in determining the final outcome.
“We are dealing with adversity … but I thought our kids did the best they could,” Westfield Tech boys soccer coach Kyle Dulude said.
Westfield Technical next hosts Smith Vocational Friday at 4.

GOLF
Falcons clip Bombers
Minnechaug 174, Westfield 170
Joey Calderella and Brian MacIntosh each shot a team-low 42 at Wilbraham Country Club. The Bombers, who need four wins to qualify for the postseason, will return to the links Monday against Ludlow at Tekoa Country Club at 3 p.m.