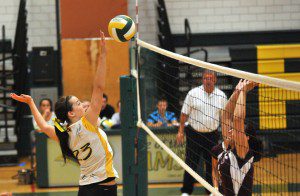 WESTFIELD – Westfield goalies Jess Hale (3 saves) and Karly Mastello (2 saves) did all they could in net to try and bottle up the Frontier High School field hockey team, a 4-1 winner at WHS.
“In my opinion, it was Westfield’s best played game yet,” said Westfield coach Karen Gomez, whose team lost but dominated the second-half play.
The Bombers have a busy week ahead with three games in a five-day stretch.

JV FIELD HOCKEY
Westfield 2, Frontier 0
The JV Lady Bombers (4-1) defeated the visiting JV Lady Redhawks 2-0 in an offensively charged game at Westfield High School.  Captain Cara Onyski scored the first goal of the game at 24:12 unassisted in the first half.  Gabbi Lunardini scored the second goal 22 minutes into the second half off an assist from captain Desiree Otero.
Westfield freshman goalkeeper Lexi Levere only had to make one save for the shutout, while Frontier’s goalkeeper was kept very busy by the Westfield offense, tallying 12 saves and allowing only the two goals off of 10 Westfield offensive corners.
Bomber defenders Meg Parent, Christina Onyski, Kat Cepak, and Rachel Gelina did an awesome job keeping the play out of Frontier’s striking circle and totally silenced the Redhawks offense.