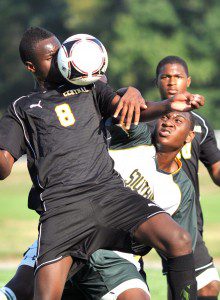 WESTFIELD – The Westfield Voc-Tech boys’ soccer team has done a complete 180 in its first full week of the season compared to one year ago.
Voc-Tech won its second game in five days, a 4-1 win over host Pioneer Valley Christian School. The Tigers, who were 0-3-1 at this point last season, finished the week 2-1 to improve to 3-1 overall.
“It was a good test for us,” Voc-Tech coach Kyle Dulude said of the busy schedule. “It’s a good start to the season.”
Sophomore Dmitriy Stepanchuk scored two goals in the first three minutes – 1st and 3rd – and tacked on a third about 30 minutes later to lead the Tigers. Alex Makarcuk, Cole Provost, and Colin Fecteau assisted Stepanchuk in his effort.
“He finished well,” Dulude said of the sophomore forward. “He used his speed.”
PVCS attempted to trap Stepanchuk but he blew by the defense.
“He definitely capitalized on that,” the Tigers’ head coach said. “He did a good job finishing.
Teammate Colin Fecteau added an unassisted goal in the second half.
Stepanchuk and the Tigers got a big lift from freshman Tyler Hall, who has been the consummate player in the early going this season.
Hall filled in for injured starter Peter Makarchuk at the center-halfback position. The freshman has already played right fullback in the season opener, and left fullback and forward in the second and third game of the season, respectively.
“He’s doing a great job,” Dulude said of Hall. “He wants to learn the game. He will do anything.”
Dulude said many of the team’s underclassmen continues to impress with players such as freshman Dominic Rosario and sophomore Mike Brut contributing strongly in the midfield.
“Our speed and communication was great, things are just clicking,” the coach explained. “Hopefully that will continue.”
Nelson Roque, Paul Krapova, and Adam Gilbert delivered solid defensive efforts for Voc-Tech. Tigers’ sophomore goalie Vitaly Covileac was nearly flawless in goal, finishing with 11 saves. Covileac allowed just an own goal.
“He was very active in goal,” Dulude said of his goaltender, who came out of net to rip away corner kicks and steal away balls near the top of the box. “He did a great job.”

Sci-Tech 5, St. Mary’s 1
Sci-Tech exploded for four unanswered second-half goals to pull away from St. Mary’s at Westfield Middle School North.
Bryton Banks scored two goals, Samuel Yaw Asamoah, Jamison Major, and Buwan Giri had one apiece for the Cybercats.
St. Mary’s Zaccery Girard scored a sensational header off a Mike Tassinari corner kick in the waning seconds of the first half to force a 1-1 tie at the half.
“All in all, I was extremely proud of our effort, even in the loss,” St. Mary’s coach Andrew Martin said. “The energy and effort was much better today, compared to our Tuesday game versus McCann.”
Bryce Kibbe finished with 12 saves in net for the Saints.
“My three captains – Zack Slepchuk, Mike Tassinari, and Anthony Garde – all played well in defeat,” Martin said.
St. Mary’s and Westfield Voc-Tech will meet in a showdown Tuesday at Jachym Field.

Westfield 3, Longmeadow 1
Westfield scored three goals over a 15-minute, second-half stretch to rally past Longmeadow. Matt LaCroix (from Kyle Murphy), Tim Swords, and Murphy (from Chris Unger) netted one goal each for the Bombers (1-1-2).
“It took a little bit to get going,” said Westfield coach Gabe Crane. “Then these guys just played great in the second half.”
Sam Blake finished with 16 saves for Westfield, and Rob Sullivan had another solid all-around effort.

Central 2, Southwick 0
Scott Simpson and John Harrington each scored in the seventh minute to lead Central past Southwick. Patrick King and Tim Reardon had two saves apiece in net for the Rams.

JV BOYS’ SOCCER
Southwick 1, Central 1
Southwick Dan McClellen scored on a pass from Declan O’Donnell to help the JV unit improve to 3-1-1. Rams’ Dan Lane and Adam Lane had strong games in the midfield.
Danny Sullivan and Adam Jensen had standout efforts in goal for Southwick.