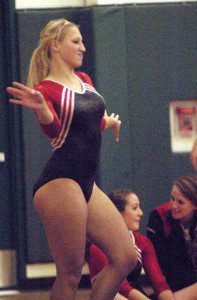 Westfield’s Jaymie White settles into a groove in her floor routine Tuesday against Gateway and host Minnechaug in a gymnastics meet in Wilbraham. (Photo by Chris Putz)

WILBRAHAM – As the Westfield High School gymnastics team’s win streak reaches epic proportions, its highly successful, longtime coach Joanne Hewins continues to sweat out meets against some of the region’s best.
Hewins and the Bombers defeated host Minnechaug and Gateway yesterday to extend their five-plus year win streak yet again. Westfield placed first with 134.10 points, ahead of the Falcons (132.60) and Gators (122.40).
Emily Murphy, of Minnechaug won the All-Around with a 35.90.
“Minnechaug is a strong team,” said Hewins, who was recognized as one of the most influential coaches in her sport in all of the country by Sports Illustrated last year. “They motivate us to keep doing well. (Our gymnasts) know they have got to stay on their game. They know I expect 100 percent. Competing or not, they all come in with that mindset.”
Westfield’s top gymnasts performed up to par once again.
Taryn Hamel and Angela Bonavita placed 2-3 in the All-Around with 34.25 and 33.25, respectively. Hamel finished second on the vault (8.4), third on uneven bars (8.2), second on the balance beam (8.75), and tied teammate Josh Burrage, and Murphy on floor with an 8.9. Bonavita claimed second place on the uneven bars (8.25) and third on beam (8.7).
Westfield’s Brendan Whitman finished first with his floor routine, earning an impressive 9.5. Bombers’ Jaymie White tied for fifth with her floor routine with an 8.55.
“Our floor team keeps persevering,” said Hewins, whose teams have consistently dominated the competition on the floor exercise throughout the run. “We have such a good feeder program. We have a plethora of talent between our gymnasts and dancers. Today, we were solid on vault, our beam was up and down, and we’re still gaining strength on the bars.”
Murphy topped everyone on the vault (8.85), bars (8.85), and beam (9.15). Sammy Dame, of Gateway placed third on the vault with an 8.35.
“We need to stay strong and healthy, and keep the direction we’re going in,” Hewins added. “At this point, we need to remain healthy and strong with Western Mass. right down the road. That’s what these gymnasts have been aiming for all along.”